What a year. This one had a little bit of everything; my fourth Boston Marathon, a 5k PR, and my first DNF. I had a legitimate excuse for the later as a wicked crash in my third triathlon of the season landed me in the hospital. With that, here's the retrospective on Seeking Boston Marathon's 2014 season, but first a look at the year "by the numbers."

Five: Qualifying at the 2014 Boston Marathon, I will race in my fifth Boston Marathon this coming April.
Four: Number of broken ribs from my crash in July.
Three: The number of ribs completely snapped in that crash.
Sub twenty: I hit one of my goals for the year by breaking twenty minutes in a 5k at the Lucky Laces
5k in March.
19:21: My new 5k PR set this year.
8 out of 11: Number of podiums this year (not counting Boston.)
200,000: Number of page views my blog reached this year.
Eleven: Days spent in the hospital as a result of my triathlon crash.
1575: Total miles in 2014. Far short of the 2200 miles in 2013. (I revised this number when I realized I never posted the swim or bike leg of that infamous crash race.)
71: Blog posts in 2014.

From a social media standpoint, I had a fun year with a couple of notable events. I came in 2nd in the Got Chocolate Milk Recovery contest. This was the contest to win as it included three Garmins and a $500 Nike gift card among other goodies. Thanks again to the good folks at Rodale, Runner's World Magazine,, Got Chocolate Milk, and Men's Health Magazine for that one. My other highlight was being profiled in RunChat's Run Blogger Month (HERE.)

Of the seventy one blog posts I had this year, here are a few of the highlights.

While the event this post was based on was anything but funny at the time, "A Run With Runs is no Fun" was much funner to write and illustrate and got some of the best comments of the year.

I'll skip the details.
The smells and exhales.
But I left there much lighter.
My bung no longer tighter.
My hole no longer corked.
My cheeks no longer torqued. 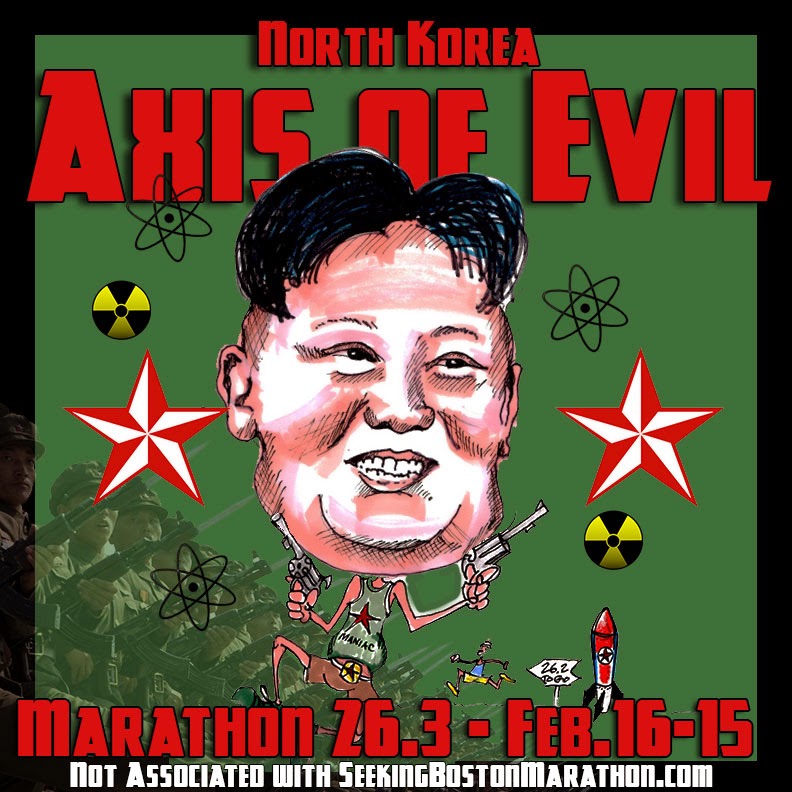 The other satirical post I had fun with did not get the response I'd expected, but life imitated art as "The Interview" movie was originally shelved by Sony over the holidays. I also mocked North Korea in my "Axis of Evil" marathon post, "One Race I Won't Run if I Don't Get Into the Boston Marathon." One reason I shared why I wouldn't run in the North Korea Marathon, "First place, firing squad (someone with a funny haircut is supposed to come in first,) second place work camp, third place, you don't want to know."

Wanting to understand what works and what doesn't in the "blogosphere," I polled a number of fellow bloggers to get their input on growing readership in my "Blueprint for Building a Run Blog Brand." Even if you're not a blogger, these are some great runners you should follow.

filling in the ten by ten matrix in photoshop. My journey to Boston included detours to California, Boston (a couple times before the race,) Mexico City and the Super Bowl in New York City. The video recap can be seen (HERE.)

I take full responsibility for my crash in July. A parent of one of my son's teammates reached out to the race director to let him know I was in the hospital and how serious my injuries were. The same friend encouraged him to "check in" to see how I was doing. Due to potential legal ramifications, he told the parent he couldn't contact me. Once home, I emailed him asking if he'd mail my brand new goggles I left in transition. He said I could drive (the hour) to Colorado Springs to pick them up. I told him I was on pain meds and unable to drive. "Okay, I'll mail them to you." I'm still waiting.

Best Race of the Year

This is a close one with four options; 1) Returning to Boston a year after racing the previous year when the bombing occurred, 2) having my daughter see my podium performance at the Slacker Half Marathon (1:30,) 3) my fastest 5k ever finally breaking twenty minutes in March, 4) my return to the podium this month.

All of the above are great memories, but after my accident and three months without running, it could be my last race of the year at the Santa Stampede 5k. While it was far off my PR in March, I finished the year with 2nd place in my age group. I could feel my ribs are still not quite right especially in the cold temps and my (re-inflated) collapsed lung stung with the same cold air. Regardless, it was a great way to end the year and start 2015 with optimism when it looked in doubt a couple of months ago.