Sultan of Swat, Theodoric of York Medieval Barber, Prince of Bel Air, King of Late Night...all titles with absolutely nothing to do with each other, but then again, what's in a title? I've had some impressive and confusing ones myself over time such as Global District Manager. That one made no sense, but it showed up on a box of business cards. My latest title is "Ty the Ambassador."

I haven't exactly basked in anonymity, but I have largely wrote about running because I love running and re-discovered a love of writing. I have never really sought out endorsements of any sort, or ambassadorships. Perhaps that bike accident changed something. Since then, I won the GotChocolateMilk Recovery Contest and after failing once before, I applied and was accepted to the local running store's triathlon race team with Runner's Roost for 2015. Admiring other bloggers and their affiliations, I applied for upon advice from a friend to become a FitFluential Ambassador. This last week I received word that I was selected indeed to become "Ty the Ambassador."

I had all sorts of word association that swirled in my head with the word ambassador, so I Googled it. The predominant search result was from a really bad-ass looking car from the 50's. Nice association. Then I thought of the diplomat version and saw lots of receding hairlines of old dudes shaking hands with sheiks and aristocrats.

No, I'm not any of those, but part of a team representing health and fitness and tweeting, Facebooking, and Instagraming about products that fit my running lifestyle. Clearly, they didn't do their research as many of their advertisers might find some of my posts offensive (Rudolph's Misfit Running Toys, Gym 101 Rules, or Why Triathlons Are Like Frat Houses.) Or maybe they just see someone with a slight imbalance with an obsession with the Boston Marathon and figuring out how to corner a bike in a triathlon.

Regardless, I'm excited about wearing the badge of Fitfluential Ambassador. Thank you for the vote of confidence. It gave me confidence and I'll try and live up to it. 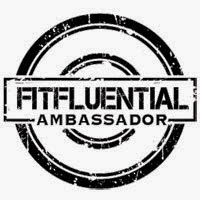