Sending Out an SOS

When to fuel, how to fuel, how much to fuel, and how "not to bonk" are some of the toughest areas for me when training for and racing in a marathon. Out of all the marathons I've run, I can only think of one where I didn't "hit the wall" and certainly have had plenty of long training runs where I questioned "why do I run, how many more flippin' miles do I have left," and "I'm dreaming of a giant burrito."

Assuming you have a good coach, training plan, and the right work ethic, you're almost there but what to eat and drink prior to and within a workout is often left up to "trial and error." It also obviously depends on the length of the race. It always cracks me up when I see someone with a fuel and water belt lined up for a 5k race. I won't knock anyone for trying or just starting out in a sport, but please leave the fuel belt at home for the 5k, but if you choose to, go ahead and put your bib on your back to make it complete. #rookie

As always, I digress and back to the topic of fueling. I have found a few things that work and a few that don't. No offense to Honey Stinger, but I call it "Honey Stinker" as in, honey is known to be a 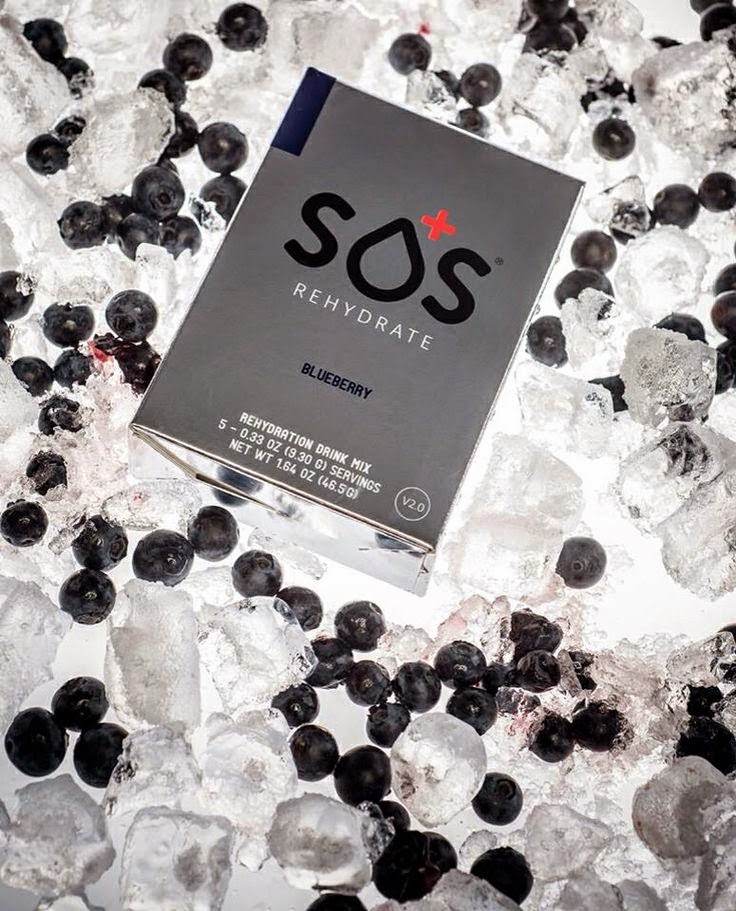 natural laxative. It did not agree with my system is the best way to put it. Heed energy is nicknamed "Heave" in many circles as it takes a certain constitution to stomach that stuff. In terms of gels, I'm quite keen on Hammer gels (same folks that make Heed) and PowerBar Gel Blasts (the later are smaller and I have tended to ingest in more frequent intervals during a race.)

The latest product I've tried out is SOS Rehydrate from SOS Hydration. While I've yet to use in a race greater than a 5k, I have introduced into my training cycle over the last sixty days as I've ramped from "gimp out of the hospital" to training for the Boston Marathon.

The packaging and preparation is pretty slick as each box has five individual serving packets with a powder concentrate intended to mix with 500ml (16.9 oz.) Powder is the right word as it mixes easily versus other energy and performance products I've used.  I've been using the citrus flavor which resembles a Gatorade drink and the comparisons should end there. A few facts about SOS Rehydrate;
Getting back to the Gatorade comparison, I have generally steered away from their products as they didn't strike me as the best products to be pumping into your body despite their near-monopoly status. In 2013, they put their (Tiger) tail between their legs and removed the controversial ingredient, BVO, from Gatorade. What's BVO? Google it. It's bromated vegetable oil which is used in flame retardants. No thanks...catching on fire is the least of my worries around mile twenty of a marathon.

That's a lot of science talk for an ex-art major, but the real "proof in the pudding" is how I've felt during my workouts as of late. Nearly seven months ago, I was laid up in a hospital for eleven days unsure if I could return to the podium form I had earlier in 2014. While SOS can't help broken ribs or a collapsed lung, I hit the podium in my second race back since I've started training again. I've been using SOS on long runs and on my speed days. If I charted my recovery and energy since I started up speed work again, it's improved exponentially over the last month. While much of that I attribute to my maniacal obsession with returning to my previous conditioning level, SOS has been a welcome addition to my training portfolio.

Take that Keith Jackson and the Gatorade sports lab!

I will continue to use SOS as I train for my fifth Boston Marathon this April. Keep track of my training here and on;

What has and hasn't worked for you?