UPDATE: On Friday December 11, 2019  Thomas Callaway turned himself in and was charged with sexual battery. He posted a $1,300 bond.

There are days when I have hope and more often lately, a sense of despair when it comes to humanity in our country. This last weekend, a WSAV female reporter was doing her job and live broadcasting the start of the Savannah Bridge Run in Georgia. At the start of the race, everyone is full of hope and smiles just as Alex Bozarjian was.

Alex looks to be about the same age as my 24 year old daughter which makes this even tougher to process. The race video clip which has gone viral shows people swatting at her hand holding a microphone (which she handled with grace) but then an older male runner veers towards to the side of the road and promptly swats her on the butt. Classy. Hard to find the right words to describe my reaction as a runner and a dad, but "vomit forming" and disgust come to mind. 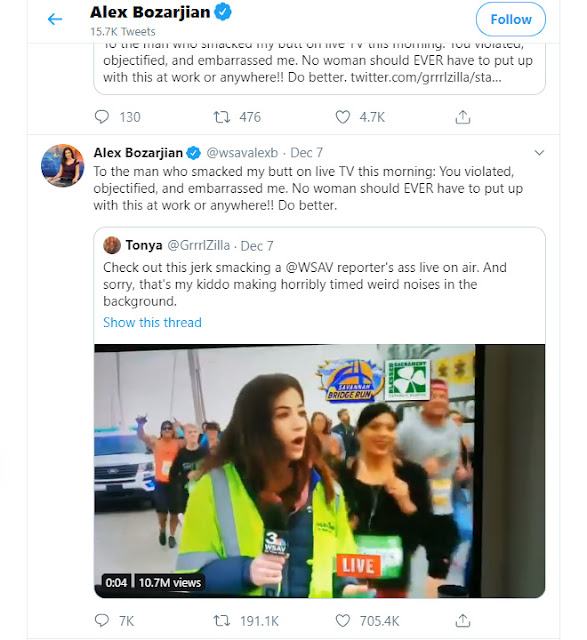 The "internet police" have swarmed to the young woman's defense and identified (per Marathon Investigation) the "slimeball" who I'll call "Tommy." Tommy is not only a pig, but not very bright given you wear a bib number in a race and your sexual harassment was in front of a news crew. I have a history of "dog-piling" on a story (see Mike Rossi) and will let the race officials and law enforcement (and his wife and family) deal with his consequences. I won't go political either other than to say, we seem to be going backwards when it comes to respect for women in our country and not a surprise given our political role models (political role model--see "army intelligence" or #oxymoron or #bebest.)

I thought for a minute as the story broke to think if I'd ever done something so abhorrent. My sense of humor gets me in trouble (often) but I've never been "that guy" that thought pinching or slapping a woman's derriere was in any way either acceptable or an ice-breaker in a bar, grocery store, restaurant, or anywhere on this planet. Tommy has gone into full damage control, shutting down social media channels, but if "Mrs. Tommy" is anything like Mrs. SeekingBostonMarathon, "hell hath no fury" and hope you have a comfortable sofa--you'll be there for awhile awaiting your day in court.

C'mon guys. Show some respect, as Alex points out, you can "do better."...like a LOT better.