My Ugly Valentine: A Labor of Love

Another misleading blog title post. No, my Valentine is not ugly; I'm still in love after 18 years in what I described as a torrid romance that lead to an equally torrid marriage. The ugly is the events and phone call last night that lead to "ugly crying" of my IRun4 run buddy's mother, Joan on her way to work the morning of Valentine's Day.

I've been waffling a bit on the race objectives this year despite having already notched a half marathon with my run buddy Liam; I was not quite sure what the target races were for the next ten and half months. As was the case with our first race; a casual comment in conversation lead to some great things; "We should race together! lead to a mere 5k at the Carlsbad 5000. "We should get our own blade (we did,) then, we should do a half marathon (we've done two now, Denver Rock n' Roll and Carlsbad Half Marathon.) Joan somewhere along the way mumbled, "we should do a triathlon!" 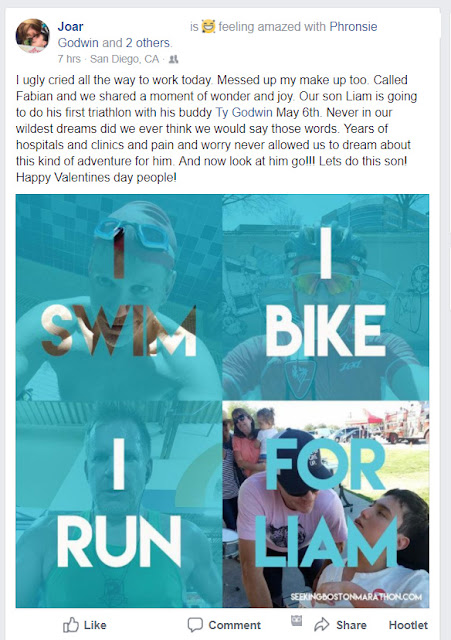 Triathlon's are not a concern of mine...other than the time I nearly died in one; seriously, that happened. (See HERE. Note to Joan--don't read THAT post.)

Other than that miscalculated corner at 30 MPH on the bike in that race, I'd have to say that I'm a better triathlete than I am a distance runner if measured in podium success. Up until the last two seasons battling a myriad of nagging injuries, I "bat near .800" when it comes to hitting the podium vs. the pavement.

So, then; what's the big deal and why all the angst? For one, pushing a running chair is one thing, but swimming a half mile, then biking with someone in tow; I've simply never done it. #gulp.

Having said that, I have greater ambitions for Liam and I; including dancing with the idea of an Ironman (half,) but walk before you run. With my travel and life, I hadn't connected with Liam's Mom Joan in awhile. This week I finally signed up for the Spring Sprint Triathlon in San Diego on May 6th. This set into motion a bit of a panic on "momma bear's" part; putting her kid in my hands in the water, on the bike, then the run.

We spoke for nearly an hour from my rental car in Seattle to her home in San Diego. There are many activities that need to happen in the next few months, but we have a plan. She's already ordered the bike attachment and we discussed the raft and rope/harness options; but the other fact remains that Liam lives in San Diego and I live in Denver. I have a few ideas I socialized with Joan on getting repetitions in before the race itself. While you can "wing it' in a run race, there are (more than) 3x the variables happening in a triathlon.

Transition; lifting Liam out of the raft with a scoliosis rod in his back that does not bend like most kids/young adults would bend when picking up.

The Water and Raft; what to buy? (She shared our good friend Jim Pathman from Team Hoyt San Diego uses a surf board and a rope. I won't be doing that.

Safety (mainly on the water.) There is a swim buddy that will swim alongside us should help be required. I also shared with Joan that there are normally an ample amount of safety kayaks on the water should something go awry. (First time triathletes are known to either "panic" in the water or simply not have the experience; or both.

The Bike. I panicked (there's that word again) a bit myself wondering how how does the run chair attach to my Guru tri bike. Joan sent me some videos and I think my fears are put to rest, but there's also the matter of hauling 130 pounds behind me. #gulp

After our car to home conversation, I could tell that Joan moved from nervous (what have I signed up for here!) to excitement. The ugly part apparently happened this morning on her way to work. I posted her Facebook post above as she had the epiphany of her son who has never walked, is blind, and has cerebral palsy and severe scoliosis will be racing in a triathlon. She "bawled" on her way to work knowing her son is fulfilling all sorts of dreams she never dreamed possible.


These parents (Joan and Fabian) are no average parents of a special needs kid. Since Liam has become a half marathon podium finisher, he's gone sky-diving, fly-fishing, trail-walking, and solicited beads in New Orleans Mardi Gras district. This kid's got game!

Footnote: Much work to do and special thanks to our sponsors Love the Pain and Pro Compression. While there is NOT a Team Hoyt Denver Chapter, I've been in touch with another organization in Denver that matches special needs kids to runners and triathletes; Athletes in Tandem. I know the founder there and hope to get some "time in the cockpit" with more experienced players here.