There's an elephant in the room and its name is the New York City Marathon. I won't rehash all the injuries or talk of "comeback" over the last year, but the fact is, I had set a goal a long time ago that I not only wanted to run the New York City Marathon, I wanted to qualify to get in. Part of what drove me was someone who told me I couldn't get in via qualification. 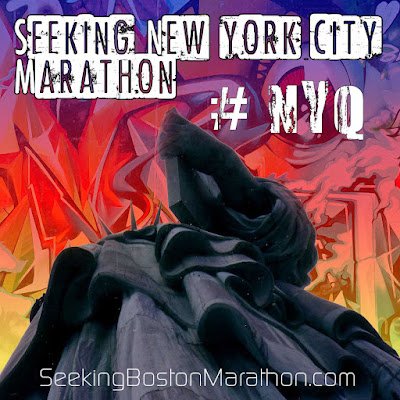 I did that last year (running a 1:29 half marathon,) but an accident, meltdown at the Boston Marathon, and injury setbacks have got in the way of fulfilling my goal of actually racing in it.

May 18th I started rehab on the torn labrum in my left hip. The same hip that hampered the whole month prior to Boston and lead to my slowest marathon ever. I have had more doubt than optimism over the last three months and only started running again in early July. Those first few runs were not pretty. I was out of shape and literally weighed more than I have in probably fifteen years. Apparently, I was "stress eating." My hip was still sore. My physical therapist told me I could scale back on the strength exercises, but perhaps with Meb (Meb For Mere Mortals) speaking to my running subconscious, I decided that I needed to do more; not less.

Since then, I have been a devout stretch and strength guy. I have averaged six days a week upping my time per day at 25-30 minutes doing a variety of strength and stretching (see POST.) I have combined that with a blend of chiropractic work, ART (Active Release Therapy,) and massage on average of once a week. In all, that's around 2,500 minutes since May. You might say I want to run that race.

I have been talking to my running coach, but had not told her I was going to race New York, but was going to start increasing my miles to see if my body could handle it. I started that around sixteen weeks out from New York which is when I typically start the official training plan for a marathon. I started introducing normal aspects of my training which included speed work on Tuesday or Wednesday, tempo on a Saturday, and long on a Sunday. My hip was getting stronger, but I still had some days of soreness.

Then along the way, something odd happened. I started to get a bit faster, and I started to have some days where the hip didn't bother before, during, or after a run. I iced it a lot (and still do.) Since mid-May I have also done a lot of cross-training (swim and bike,) and resumed doing triathlons. I've raced twice and have another sprint triathlon this coming weekend.

This last week was more than a bit of a breakthrough. I had the best bike ride perhaps ever. I increased my quantity (8x) and speed (progressing to sub-six minute per mile pace) on Yassos on my speed work-out day; then followed that with a nine mile tempo run on Saturday with a 14 mile long run on Sunday. That was my best weekend in six months.

Not even two weeks ago, I felt I was headed to surgery and made a follow-up appointment with my orthopedic surgeon on Monday (yesterday.) I took a long time getting to the point, but my doc was thrilled. He was impressed with my strength and stretch regiment. At this point, he's given me a solid green light to run in New York. Fuhhgetaboutit! Getthef*ckouttahere! You gotta be kidding me!? Yes, the hotel is booked, and I'm all in. Bring it on. Start spreading the news.