What I forgot at my last run…

With roughly 10 weeks away, I was looking forward to this last Saturday’s long run. The pre-run social mingling was a reminder of what to pack for the Saturday run as one of the female runners had everything on, but the heavy North Face parka and Uggs seemed out of place as we started to huddle in our pace groups. She confessed that she forgot her shoes. Fate intervened as she’d been sick all week and merely cheered on runners as we took off with our groups.

Feeling “big for my britches” I took off with the fastest pace group, the 3:10 (expected marathon finish time) group. Runner’s Edge 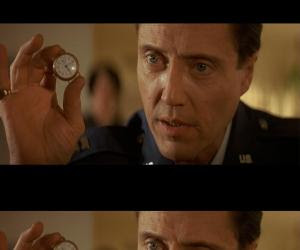 of the serves runners of all ages and speed. I’d moved up from the 3:30 group to the 3:10 group in January. There are clearly a few elite runners that take off at a much faster pace than even the 3:10 group. Prior to our Saturday run there were a couple new runners that showed up. Based on the apparel and runner’s build, I sensed that there were a few new Gazelles that showed

As the 3:10 group left, there was no warm-up for the speedsters as they took off and I felt flatfooted like I had taken a six month layoff. Two turns into the course they were out of site. I accepted my position as something far less than an elite runner. I'm okay with that but I felt like I didn’t quite have the energy that day…no mojo…no running out way too fast as I often do. I clearly didn’t have my energy that early morning—what was wrong? It was perfect running weather (cool…not sub zero,) not too much snow or ice on the trail, a new route (always good,) and I seemed to remember everything; Garmin, Skins, long run wool socks, heavy gloves, hat, my scratched Nike running shades, and a couple options for keeping me warm on the cold run.

My previous “what I forgot” moment was Body Glide on the long run. Let’s just say there’s a runner’s formula; Cold Run + Long Run minus Body Glide = Sore Nipples. Email me if you don’t quite understand that one…I think you get it.

The training week prior to the long run went quite well…in fact, I may have overdone it. With the notion of running Boston a mere 10 weeks away, the adrenaline is getting the best of me—running way too fast, and not exactly following the spreadsheet that maps out each run every day over 16 weeks. I had two hill runs this week—the plan only called for one. Flu bugs have been swirling around the office and I’d seemed to “dodge the bullet.” 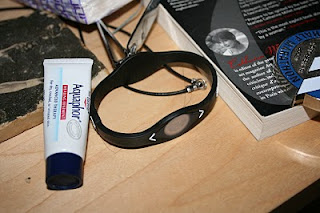 I’d convinced myself the night before that I felt okay…I didn’t. Waking up Saturday morning, I didn’t feel quite right. One of the “Golden Rules” of running is listen to your body…if you’re hurt, don’t run, if you’re sick beyond a cold, don’t run, and rest when you need to. Perhaps a signal to stick to the plan and listen to the body.

By the way…the two items I forgot on Saturday’s run; my gas station pre-race elixir “Five Hour Energy,” and my Power Balance bracelet that I discovered on my nightstand at home when I returned. Similar to Bruce Willis in Pulp Fiction who couldn’t leave town without his gold watch, I can’t seem to run without the kryptonite bracelet.