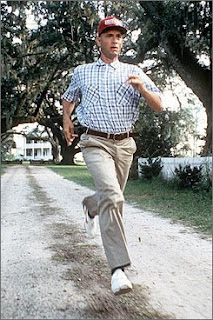 So...where do I start. Let's start with, this is NOT an ask an expert site on running, marathon running, diet (my biggest weakness,) fartleks (I really don't know what these are,) or training programs (I rely on Hal Higdon for that.)

Short version is that I started running in '99 approaching my 40's going through a life change--much like Forrest Gump. I ran and ran and ran, (Just like Forrest) and learned they actually organize races where it's not just running by yourself. My mistake was getting a tiny trophy in my first organized 5K in my age group. I didn't realize, I had a lot of built up energy and did okay--that got me hooked on running.

After running short distances forever, I started telling my significant other (now wife) that someday I'd like to try a marathon. I got Hal Higdon's book for Christmas and the addiction went to a whole other level. I ran my first marathon with no training and training with the mere guidance from Al's book in 2008 at the San Diego Rock and Roll Marathon. I ran a 3:42. I thought that was good, but was disappointed I didn't hit 3:30.

I overtrained in 2009 and ran two marathons; San Diego and Chicago. The later I ran (unbeknownst to me at the time) on a stress fracture in my left tibia. That combined with a late start and high temperatures, I once again fell short--this time two minutes of my 3:30 goal.

I have been re-habbing since and starting my official marathon training program next week for the CIM in December. I hope to blog about my progress along the way.
Email Post
Labels: boston Chicago Marathon CIM marathon San Diego training