Of all the worlds I've loved before. This one was one of the best as Mr. and Mrs. Seeking Boston sought parts of the world that she's never seen and two that I haven't. I won't bore you with all 2,000 photos I took or every stop along the way, but a few highlights from each city if you've ever considered vacationing in Barcelona, the Canary Islands, or Lisbon, Portugal.

For starters, my slight loss of hearing in my left ear is not all not for naught. My (day job) traveling profession with over 1.5 million flight miles on United and many nights at Marriott properties allow me the privilege of traveling on "points" to some amazing places.

First stop. Barcelona. Our first hotel on the journey was an Autograph Collection (Marriott) property, the Cotton House Hotel which is a historic landmark being the former Cotton Textile Foundation. Think high-end atelier or fashion house with a hotel staff that was so pleasant it was almost uncomfortable. Everything from the linens to the restaurant, and large ice cubes in our gin and tonics was luxurious and memorable.

With my wife owning a Kitchen and Bath Design and showroom, architecture was on our list including the famous La Sagrada Familia Cathedral. I'd visited here four years ago and at the time it was not complete despite being under construction for over 130 years (and surviving the Spanish Civil War,) and was another 100 years out. Private contributions have accelerated progress with interior finishes and a new side entrance and construction is now on pace to finish by 2026.

From afar, it looks like a sand castle, but as you get closer, you see the ornate sculptures (often weaving in nature as is a central theme to Gaudi's work.) More impressive in my mind is the inside with stained glass that projects colors onto the interior as if projected by colored stage lights. A must see when visiting Barcelona, and recommended you go by tour.

Hard to choose my second favorite part of Barcelona (perhaps the motorized bike tour of the city,) or a concert at the Palau de Musica Catalana with three world renowned guitarists accompanied by a pair of Flamenco dancers. The Concert Hall is simply breathtaking as was the finale.

Before heading onto the Canary Islands, it bears mentioning that I was in the first half of a marathon training plan. Extra planning was involved to not have running be the focal point of the vacation. Using a variant of the Furman FIRST training plan helped in that I'm only running three days a week (albeit aggressive runs.) Mixing in tourism with Yasso's I tackled my speed work on the Arc de Triomf plaza...while sweating out red wine and tapas.

Just as it felt the first time in Barcelona, many times you feel you're wandering on a Hollywood set with the old buildings and cobblestone roads. A romantic city to explore!

Part two of the trip was the relaxation and seclusion part of the trip and given my life, this leg could have and should have been longer. Once again, leveraging my lifetime Platinum status on Marriott, my wife booked us into the Ritz Carlton Abama. It was as luxurious as it sounds, but candidly, I lean towards JW Marriott properties or Autograph Collection hotels within the Marriott brand. Not to stereotype, but I'm not exactly the "sweater tied around my shoulders" kinda guy.

Right, wrong, or indifferent, we arrived during the end of the European vacation season so it was certainly less crowded, but a number of the hotels on the property were shut down due to occupancy including their Sports Bar. Ouch.

The Abama (not Obama) hotel is on the largest island which is Tenerife. You might ask, where are the Canary Islands and the answer is south of Spain off the West Saharan coast of Africa. Not exactly a large island (785 sq mi,) but scored on the objective of opulence (amazing suite upgrade on the room with two balconies with an ocean view.) The beach was "down the hill" from the main hotel with bus, golf cart, and a funicular to the beach complete with a beach-side bar and umbrellas with a very private cove to fall asleep, or go for a swim in front of the bathing suit top optional oasis. I had a couple of great swims in the ocean and another two mile swim in the pool below our hotel.

We spent a majority of our time at the hotel property and didn't really explore "nightlife" as that wasn't the goal for this leg. We did however rent a car one day to drive to the base of the volcano.

On the last leg of our trip, we ventured to Lisbon, Portugal. Just as my wife was surprised when she preferred London over Paris, we both seemed to enjoy and prefer Lisbon over Barcelona. The cities seem comparable and both boast tourism as a prime industry, but somehow Lisbon seemed a bit less unspoiled.

Throughout the trip, we tried to mix in the right amount of tourism, relaxation, and improvisation. Overall, I'd have to say the food (perhaps due to the roll-of-the-dice on restaurant choices) was far better in Lisbon.

Our absolute favorite was googling "live music" one night and stumbling upon a tiny Fado bar. It was an almost religious experience. Tiny wood tables, dimly lit, and the owner would shut the door once the amazing vocals would start as we enjoyed Portugal's Super Bock beer.

Our second favorite highlight of the trip was a private tour--just the two of us and a guide driving a VW Bug to nearby Sintra. We saw the countryside, the coast (and the cliffs on the western most point of continental Europe,) learned of the history around the Pena National Palace, and dined in a fog-covered beach restaurant that was playing host to a surfing competition. 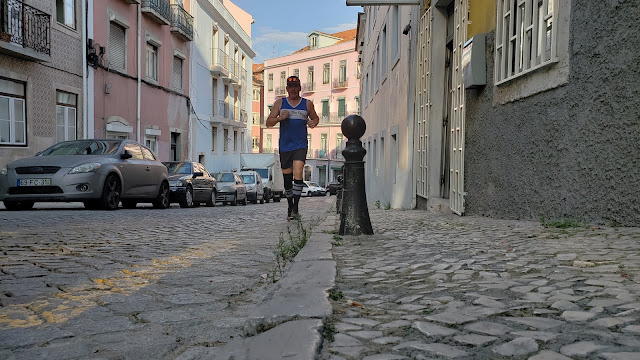 We wrapped up the week with a sailboat dusk tour along the Tagus river that borders Spain and Portugal and empties into the Atlantic. It's a great way to see the city from the water and take in sights like the Belem Tower and 25 de Abril bridge with architectural similarities to San Francisco's Golden Gate bridge.


There are dozens of other highlights and nook and crannies I left out. Feel free to ask more about these fantastic spots in comments or reach out to me on Facebook or Twitter. Would love to hear of your experiences there as well.

And no, I didn't skip a beat in training for Sacramento's California International Marathon in the process. Look out Sacramento...Liam and I are heading your way!