Life has been crazy with the kids (or should I say young adults) going back to school, my oldest starting her first "real" job while living with Dad, wedding road trip, and adjusting to a job promotion (and yes, a lot of travel) with the day job. So, sorry, I have been off the blog grid, but a lot going on the run front. My three things Thursday.


My company handed out Fitbit fitness bracelets to employees as part of an insurance program through United Healthcare. I'm a diehard Garmin guy so I was a bit skeptical of using another device to log/track activity. The two areas that intrigued me about Fitbit were tracking steps (just how many miles do I log in the airport?) and sleep activity...for some reason, my wife and I have had issues in that department (too much going on with both of us perhaps with her starting a Kitchen and Bath Design company.)

Overall, I have been quite happy with my Fitbit Flex in achieving the above goals, but I had continued issues with the design. While it's the most slender of the models they sell, it had a habit of twisting on my wrist and subsequently losing the sensor that kept popping out. The sensor is designed to slip snug into the rubber wrist band, and pops out for charging. I literally lost the sensor 3-4 times and found it at the entrance of a hotel, parking lot, front seat of my car, and unfortunately, the last time I couldn't find it. It's somewhere between Philadelphia and Denver. I took to Twitter to voice some frustration, and Fitbit followed up via Direct Message then email with a generous offer to replace or 50% off any unit. Today, I upgraded and ordered the Alta version.


Kudos to Fitbit for taking feedback on the design and making it right with a new unit!


If you've followed my blog over the last several months, you have heard about my IRun4 Michael buddy named Liam. Earlier this summer, we were fortunate to have received Liam's very own Team RunFreeRun.com is raising money for communities; special needs, and military. Maggie is one bad ass runner who's retiring from the Marines and generous with her time. I logged in this morning and see that Maggie has progressed from New Mexico to Texas. Holy mileage Batman, that's a long ass run already--San Diego to Texas! Are you kidding me!?! Utmost respect and gratitude for Maggie.
Hoyt racing blade as part of Maggie Seymour's fund raise and cross country run from San Diego to Virginia Beach. Follow Maggie's journey and contribute to the cause at RunFreeRun.com.


Finally, I hit my (I think) third podium of the year this last weekend. Rewarding yet one of the dumbest moves of mine in awhile. I've slowly notched up my mileage and actually ran a solid thirteen miles two weeks prior so I figured, "Why not?" The issue was the course I selected. The entire first half was uphill with a wicked switchback hill climb around mile 6-7. Yes, my first half mary in thirteen months and I picked a "camelback" course. Brutal. It was a smaller race with plenty of podium opportunities. It produced perhaps the slowest half I've done ever, but was good enough for first in my age group. Perhaps a bit more amazing as I'm only running 2-3 days a week. Amazing...on second thought, I'll call that stupid. It beat me up pretty good. Good news is my knee held up well, but I don't recommend this. 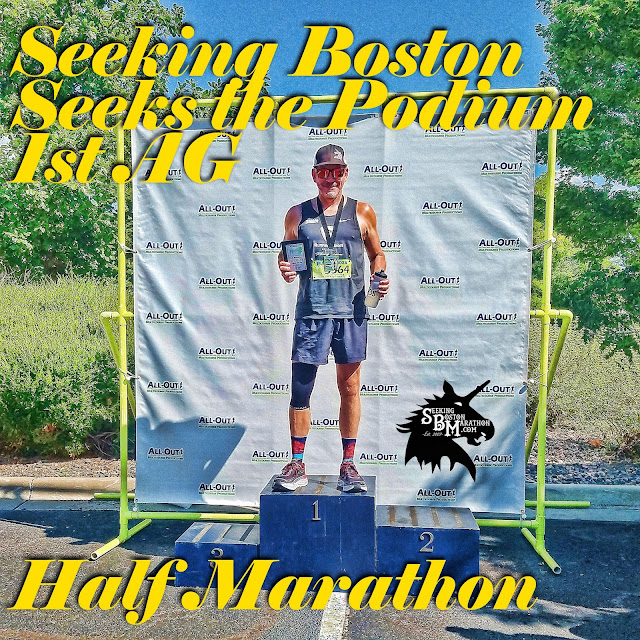