Working with my new coach (Benita) and the Boulder Center for Sports Medicine (BCSM,) my coach had suggested I re-test my VO2Max, heart rate zones, and lactate threshold.  I had this test done nearly three years ago and felt it would be good to get a baseline for my zones at roughly the halfway point of my Boston Marathon training.  I'll (do my best to) describe what these tests are, but what's the purpose of getting hooked up to a bunch of equipment and drawing blood every four minutes?  The short answer is once I understand my heart rate zones, my coach can "dial in" the appropriate speeds for various workouts to gain the most improvement between now and race day (and beyond.)

Adam, who performed my test, shared a more scientific answer with a study performed in Sweden with a number of athletes.  Half the athletes trained 20% in their maximum range (5K-10K pace) and the balance just below that (still running pretty fast.)  The other group also trained 20% in their maximum range, but the other 80% of their runs were in a "basic endurance" mode with runs that were easy to moderate.  The "alpha male" in me would think the runners that ran fast all the time improved the most, but that was not the case.

This isn't the first time I've heard this, but matched up with my recent training, it really started to make sense.  Benita has me running six days a week with one day of cross-training.  Typically two days a week, she has me running above lactate threshold (there's that word again...I'll explain soon) or at an "all out" pace.  Think Yasso's speed (track intervals of 800 meters below 5K pace.)  Akin to the swedes in the study that improved, I'm running my other four days super slow.

I've already got in trouble on DailyMile and twitter for using the word "slow."  Confucius say, "while one man's slow is another man's fast.  Same man's fast is another man's slow."  When Benita wants me to run slow, it's at a nine minute pace or slower.  I can honestly say, I've never run so many training miles at this pace, but I'm starting to see results.

Back to the testing.  I drove from "suburgatory" Denver up to Boulder for my test.  I have a couple of my other specialists in Boulder and don't mind the hour drive as I always feel I'm getting some divine running experience as many of the world elite train out of Boulder.  To help explain the test, first a few boring medical terms.

Heart rate:  Simply your heart's beats per minute.  Most Garmins have heart rate capabilities that require a chest strap to calculate and send to your wrist.  For my test, they used an EKG.  A "bonus" for being an old guy.
Heart rate zones:  One of the most valuable outputs of the testing.  This will tell you what your BPM should be under various speeds and levels of effort. Zone 1 is considered jogging with minimal effort and they go up from there.
Lactate threshhold:  Another important metric to get out of the testing.  This is "bonkville USA."  Above lactate threshold is where your body melts down and you're unable to recover in a race.  Lactate is a fuel that the body can use to fuel exercise at a limited rate, but there is a maximum rate of lactate recycling.  During low intensity, the amount of lactate that is removed from the exercising muscles is equal to or greater than the amount of lactate being produced by the muscles.  If you exercise above your lactate threshold, blood lactate concentrations continue to rise.  At this point, think someone just poured water into your gas tank.  #notgood
VO2Max: Maximum RPM's.  How large is your aerobic engine?

BCSM is on "the hill" in Boulder along the gorgeous flatiron mountains of Boulder.  My treadmill for the test looked out a window and actually had a light snow fall happening as I started my testing.  Adam proceeded to hook me up to all the appararatus while he explained what we'd be doing that day.  Over a certain age, you either had to have a waiver signed or get hooked up to an EKG.  I whiffed on the waiver so Adam proceeded to shave a few patches so he could hook up the EKG leads to my torso.  He used some crazy sticky glue for that and after hooking the wires up, he rolled a tight gauze over my upper half.  It looked like a fishnet tube top.  While I wanted to take plenty of pictures, there were none of me in the tube top.

After hooking up the EKG, he mounted the breathing tube that would measure my VO2 that had a "kluggy" headgear apparatus that tightened like a bicycle helmet.  Once it was on, it wasn't too bad, but then he applied the noseclip.  All my testing (and breathing) would be through the mouthpiece that fit into my mouth like a snorkle.  I'd get to wear this the next hour.  Once hooked up, Adam had me start out very slow with a warm-up run.

After the warm-up, we started super slow (in the ten minute per mile pace,) and turned it up every four minutes.  After each four minute interval, there would be a little pin-prick (Pink Floyd playing in the background) to measure the lactate in my system.  Most of this was pretty easy as it resembled a typical interval, but I don't normally don a nose clip and snorkle when I run.

After completing eight of these zones (progressing to sub-seven minute per mile pace,) and dripping blood all over Adam's treadmill, I was allowed another break before starting the VO2Max session.  The last time I had my VO2Max measured, they simply kept turning up the speed on the treadmill until I yelled "uncle."  For this test, they would start me out on the treadmill near marathon goal pace, but in this case, Adam would not speed up the treadmill, but keep adding elevation; 0%, 3%, 5%, 7%, 9%, and 11%.  My caveat here is that while I have run a lot of treadmill miles, I have rarely turned up the elevation.  My Gus Grissom (or George Jetson) moment came around 7%.  I should have held out longer, but a slight panic set in as I didn't want to fly off the back "George Jetson" style (see opening of the Jetson's cartoon with George walking Astro.  #ruhroh.)

After a quick shower, Adam and Benita walked me through the results.  Lots of data and charts to sort through, but a few highlights; 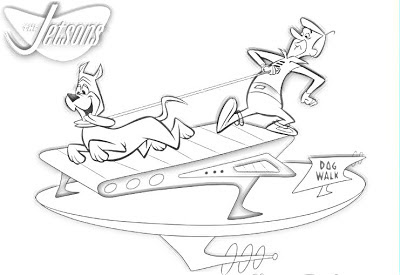 Heart Rate Zones:  As mentioned above, one of the best outputs from the test are your heart rate zones.  This will help my coach and me set paces for many of my runs.  I will try and mimic the swedes that took advantage of splitting training on the two extremes of the "bell curve."
Lactate Threshold:  My LT is at a 7:30 pace with a 150 heart rate.  This would be my PR area for a marathon with a lot of asterisks.  Course, training, race day energy, sea-level or not, and NOT wearing a nose clip.  This metric can improve over weeks and months with the right training.  Right on!

VO2Max:  I should have "lead" with this one.  According to BCSM and "Astrand: ACTA Physiol Scand 49 (whoever they are,) my max ml/kg/min is 56.1 puts me in the category of "Olympic" on a range of Low, Fair, Average, Good, High, Athletic, and Olympic.  This reinforces the fact that you can skew any statistic to make something look good.