I am not a defeatist, but I'm facing the reality that I will not likely run the Boston Marathon again. My drive to get there is not the issue.  Running is part of who I am and I'd try almost anything (and have) to fix my latest "bum wheel." I won't belabor my historical injuries or the knee that will likely end my Boston Marathon run other than to say that you can't re-grow cartilage or eliminate the degenerative effects and progress of osteoarthritis. My right knee has been sore or swollen since October and I'm limited to a couple short runs a week now.

I seem to have a calm or acceptance with my situation (at least that's what I'm trying to convince myself,) perhaps due to the growing relationship with my run buddy (through IRun4 Michael,) Liam. He has far worse medical circumstances than I. I also can't complain as many runners will never reach Boston as their goal and I was fortunate enough to run five of them. I spit in the face of arthritis, but it finally spit back. I'll write more about how I will remain active with triathlon season coming up this summer, but with my favorite race next week, I wanted to recap my top ten moments from the Boston Marathon.

1. Getting my first BQ (Boston Qualifier)

From my very first marathon in San Diego ten years ago, I set my sights on Boston. At that time, I knew very little about it, but my run group at the time had a small percentage of folks that would wear their Boston jackets after long runs. I literally envied those that got to experience Boston and was bound and determined to get there. After three attempts, I succeeded at the California International Marathon (CIM) in Sacramento. It remains my PR to this day (3:21) and I knew in the last four miles that I'd finally get there. I let out a yell at the finish line that startled spectators and cried on a curb when my wife found me. Insanely rewarding.

"Rewarding" is a consistent theme in these memories. After getting my BQ in Sacramento, I didn't want to wait sixteen months to race Boston, so I opt'ed to raise money as part of Team in Training and the Leukemia Lymphoma Society. I raised money in honor of an old high-school classmate's daughter who succumbed to the deadly disease. I'd highly recommend going the charity route as least once. We held a wine tasting event that included many friends from my high school. The charity seemed to dwarf the experience of that first Boston (and they let me line up in my corral based on my time four months earlier even though it was outside the qualification window for that year.)

3. Turning from Hereford onto Boylston


This might be my favorite part of the race. Right on Hereford...left on Boylston. My most complete and satisfying race was 2013. The crowds seem twenty deep and the cheers bounce off the tight block of buildings that typically compell you to finish strong. My photos show me charging down Boylston that year looking like I was at mile 13. It was euphoric!

Being a run blogger has afforded me many opportunities that are once-in-a-lifetime. Poland Spring Water reached out to me to see if I'd like to interview Josh. We had a "shake-out" run the Saturday before the (normal) Monday race on Patriot's Day in Boston. They'd hired a professional photographer who snapped some amazing shots on the same street I described above as my favorite stretch of the Boston Marathon. Afterwards, we sat down in a Copley Square hotel and I asked him about Boston and his advise as an elite runner. I still use(d) basmati rice as part of my night-before meal based on my conversation with Josh. A super genuine guy.

Part of the allure of racing Boston is the international 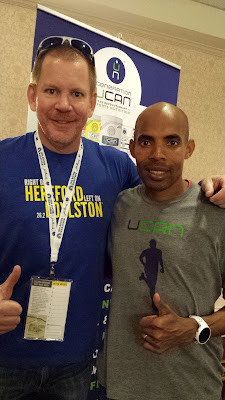 star power that shows up. You're literally running the same course as the world's best runners. You can watch the NFL Super Bowl from the stands, but they don't let you throw around the pigskin on the field like Boston allows. The list of great people I've met within the race or at the expo is literally a "who's who" of marathon racing including Dick Hoyt, Ryan Hall (won a USATF signed backpack from him one year,) Meb keflezighi, Bart Yasso (one of my favorites!,) and many others from Runner's World Magazine. I've been fortunate to have been invited as a blogger a couple years to the Runner's World Saturday night party "hobnobbing" with the big league.


6. Watching the race course video for the first time at the expo

An "absolute must" from my Boston Marathon Tips you haven't heard before is watching the race course video in the John Hancock booth. They've had it every year I've run Boston. The first year I watched it, I was crying with joy having finally reached my goal. It's also great information on the course beyond, "don't go out too fast." This is also the first time I heard and learned that two nights before the marathon is where you need your sleep. Let's face it, you won't sleep much the night before.

You will find this one also in the "tips" post mentioned above. Want to feel like a rock star? You will when you run through the scream tunnel of Wellesley College. Depending on how the wind blows, you can hear these young women a mile away as they wave their "kiss me" signs and scream at the top of their lungs. It's insane, but be careful, you will fly through this stretch and you have the hills ahead of you.


8. My Foam Roller is More Famous Than I am

With my "day job" I travel A LOT. This is normally a challenge with training but provides a benefit as I've normally booked work on the east coast to make the travel into Boston (and time zone adjustment) easier. One year, I had none other than Mark Remy on my short connection flight on a Friday morning from Philadelphia to Boston. I had on my 2010 Boston jacket and I was carrying my foam roller as I often do. He posted it on Facebook and it went mini-viral.

I've written about the "bombing year many times" including some of the anxiety that returned with
the movie about the horrible events that unfolded that day. I finished roughly 40-50 minutes before
the first blast went off and as I've described it many times, it sounded like an alley dumpster was 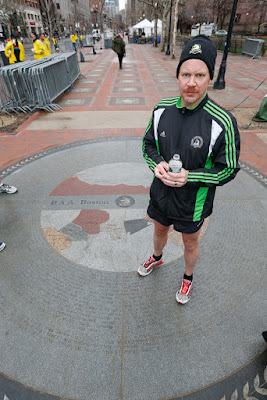 pushed off a roof. The next few hours and days were surreal and my wife and I had legitimate issues once we got home as we tried to resume normalcy. What I chose to remember was that year was my best marathon. As I described above (Boylston,) I had energy after mile 20. Without a doubt, I owe a lot to my run coach at the time, Benita Willis. A perfect race is how I like to remember Boston 2013.

I did not know it at the time, but the Boston Marathon in 2015 would likely be my last. I was fortunate to have my brother, sister, and brother-in-law each see me race at least once in Boston. My parents were with me there in spirit every year and my wife has been with me for 13 of my 14 marathons and four of five. She was busy graduating from (going back to) school and my oldest son Jesse was graduating from high school. We had never gone on a trip just the two of us. I remember my torn hip labrum and borderline hypothermia nearly prevented me from grabbing my fifth Boston, but I did not want to disappoint my son. I completed the race and created a special memory I will always cherish.

For those racing next week, a genuine "best of luck" and hoping that you forge lifetime memories like the ones I listed above. Enjoy! For those that have run Boston, do any of the above fit in your list or do you have others?