My Whole30 Trek Through the Sodom and Gomorrah Airport

I've made some world class dumb decisions. Like the time, I decided to change the propane tank in the middle of grilling burgers. #notsmart

Today was one of those days. Sunday was day seven of a (thirty day) Whole30 nutrition plan the second time around. Short version of Whole30 is caveman eating that's more restrictive than Paleo. You can eat meat, fruit, and vegetables. The list of what you can't eat is much longer; no dairy, no grains, no sugar, no legumes, no processed foods, no alcohol, no fun.

The last time (July '16 post HERE) I went all thirty days and the third day was the worst.

"I want to visualize that my arm is made from Cold Stone Creamery's cake batter ice cream and gnaw it off." (DAY THREE from July 2016)

Day three this time around was much better, but my timing was horrible on day seven.

It all seemed to start out well on Sunday morning. A banana and one egg fried at home in Ghee which is (not to be confused with glee in any shape or fashion whatsover) basically Whole30 compliant cooking butter which is completely devoid of flavor. Breakfast that morning was before a 5k race in my neighborhood (another story.) I had an amazing race and morning shared with run friends.

"Gauntlet number one" was going to a post race party which was a buffet of bad things too long to list that I couldn't eat including cookies, M&M's, Red Velvet cake (I hate you,) a cheese plate with crackers (no, and no,) and beer--not allowed. This was after walking through the "beer (temptation) village" with a friend. No sense in torturing everyone. I felt--he deserved a beer. I was proud as I walked out not even sniffing a whiff of beer. 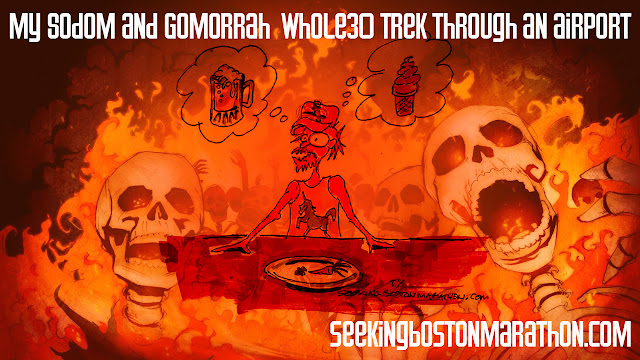 The rest of the day included a great Whole30 burger at lunch with my wife which went better than the day before.

The day before my wife and I went to a movie (that's pure hell BTW as my brain expects candy, soda, and popcorn during the show--no, no, and no.) My wife had an understandbly rough day by skipping breakfast (a Whole 30 "soft" no-no in that they prefer three square meals a day to avoid bad snack temptations.)  I won't pick on her, but I think I saw the devil momentarily invade her body. It was starvation and the devil telling me to pull over for food while her head was spinning and she was chanting in latin. If a pint of Ben and Jerry's was the first thing she saw, she would have devoured three of them. I love you honey--I know it wasn't you!

The Whole30 compliant Larabars we snuck into the theatre earlier apparently weren't enough to avoid the temporary embodiment of the devil in my wife's body. Larabars are all-natural and with a few exceptions (like the "Cookies and Creme" bar) have all Whole30 legal ingredients and taste A-M-A-Z-I-N-G! Even those are described as "Sex with your pants on" (#SWYPO) by the Whole30 tribunal. Kinda bad, but still legal.

Back to the race day (on Sunday.) Lunch went much better for me and my wife as I explained other than I had to fly for work and move a bunch of family cars around (to fix a "hit-and-run" banged-up vehicle) before getting to the airport.

By the time I got to the airport I was hungry out of my mind. This was the worst idea ever. The airport is the "Sodom and Gomorrah" of Whole30. Think...trying to find a church or "wholesome things to do" while in Vegas--that's Whole30 at the airport. Nearly impossible

There are no witnesses other than my conscious here as I could have easily slid off into "temptation alley." The airport is a cornacopia of everything you can't eat. The only kind gesture Denver International Airport shared was that it was Sunday and Chick Fil-A was closed. Thank God...I don't have to stare at their giblets and order my usual Spicy Chicken sandwich combo with fries and a frosted lemonade (no, double no, and Heeellll no!)

My head was starting to turn like my wife's did on Saturday in the car. I was starting to mumble in Latin. Everywhere I turn, I see bars (eight days without a glass of wine--not that I'm counting) and greasy burger joints that serve onion rings. My ears are ringing. My stomach is churning and my knees are getting weak. Burgers are "fair game" but the guy in the filthy grease-stained apron didn't look like he'd appreciate, "pardon me sir, do you use farm-fed beef, and could you grill those mushrooms with coconut or olive oil?" (Um...no and no.)

In the newstand shops, they try and sell some healthy stuff next to the crap you can't eat. Yes, I'm not myself when I'm hungry and no, I can't eat a Snickers. Chili-flavored Fritos--"you're killin' me Smalls." That is sex knowing you're going to need penicillan on Whole30 plan. I love you Frito's but aside from the fact that corn is a grain (and verboten,) it's got a long list of things that sound like a chem lab. Yes, "processed foods" are not allowed.

What isn't processed? Pretty much everything in most people's pantries and refrigerators. While meat is one of the main staples of of Whole30, you become an obsessive "label reader" looking for trace gram amounts of added sugar, or nitrates, and the like.

You're starting to get the picture. It feels a lot like a marathon when I tell people that I'm doing Whole30 and explain what you can't eat. They get this look of confusion and expression of "why the f*ck are you doing this?" "To feel good of course," I normally reply.

In all honesty, I have got through 30 days of this before and felt great. I was as lean as I'd been in years and felt it improved my sleep, energy level and athletic performance. While it didn't completely alter my diet, I did feel I generally ate better after the thirty days. All good stuff; you just have to trek through Sodom and Gomorrah to get there...over thirty days. I'm looking forward to being home, but not looking forward to going through the airport again.

Lastly, a REMINDER. I need your help with my run buddy as we're trying to raise money so Liam can enjoy the thrill of racing again with his own racing blade.

You can donate to the Crowdrise funding page HERE.

Your karma will be returned twentyfold if you're able to contribute any amount. Thank you so much for helping Liam and his parents enjoy the gift and rewards of running. If you are a runner, and are interested in having a run buddy, join IRun4 (they are behind in their athlete registrations and it takes only a few moments a week to post your runs on their Facebook Page.)