I was in New York City over Thanksgiving and decided to take in a movie to rest from all the holiday hustle and bustle. As I nestled into my seat with my buttered popcorn and Hot Tamales, the theatre went dark. I always arrive early to the cinema to catch the previews. One of my favorite actors, Mark Wahlberg, lit the screen and I inched forward in my seat to see what movie was coming out that I'd certainly see. He was wearing a police uniform, but then a more familiar scene presented itself. He was a Boston cop and the movie was Patriots Day; the movie about the Boston Marathon bombing.

My heart skipped a beat and there may have been an audible gasp. My son looked over at me wondering what my reaction might be and uncharacteristically, touched my arm. All the emotions of April 15, 2013 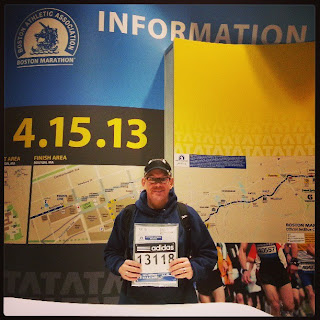 started to flood my senses. I had heard they were making a movie about the bombing tragedy, but the preview caught me completely off guard. The brief clips were quite familiar; particularly the Boylston finish line flags that were the backdrop to the best marathon performance I'd ever had. My body had no injuries, and my professional coach had me in the best race condition in my life for the race that day.

The movie preview (and subsequent previews) I've seen on T.V. bring back a number of memories.

When I returned home from Boston to Denver after the bombing, my wife and I had a delayed reaction realizing how close I'd come to a horrible situation. I was more concerned about my wife as a spectator on the sidewalks that day versus myself. We coped with feelings of mortality and what could have happened. I've had many people ask me to recall my story from that day in fascination; what happened, and where was I when the blasts went off. My still vivid recollection from that day;

Within a mile of the finish, I went under a viaduct looking for friends who were supposed to be there cheering us on. I saw Bart Yasso (from Runner's World Magazine) and yelled out his name (we'd met once before...among the hundreds, or thousands of runners he's met) thinking he'd yell out encouragement in my name. He did, and it gave me extra energy (the best energy I've had in a marathon after mile twenty.) I rounded Hereford onto Boylston, and my gait and posture was strong. My race day photos would later show a runner who looked like he was at mile thirteen, not mile 26.

I ran past the Starbucks where I was earlier in the weekend and was the location of backpack number two. I looked for my wife as this was the spot she'd watched me from along the mailbox right across the streeet in my previous Boston Marathons.

Along Boylston, I kicked into "high gear" on my sprint to the finish, I saw the finish line flags which were so prominent in all the video that would come out in the coming days. I passed Marathon Sports where I bought "last minute" gels the day before and passed the plastic M&M character on the sidewalk that would also be a victim in the first blast.

After the race, I was to meet my wife then head over to nearby Loews Hotel to meet other runners I'd trained with. Just as we exchanged a sweaty kiss and hug in the reunion area, we heard a sound I will never forget. As I explained many times to those that have asked (I don't mind talking about it,) it sounded like an alley dumpster had been dropped off a roof...and not from the second floor. It was loud.

It was odd as everyone looked around briefly, wondering, "what was that?" Moments later, we'd hear a second similar noise but slightly muffled. That would make sense as it was further from the finish line in front of that Starbucks. Again, no one really paid any notice to the noise and everyone went about their reunions. Growing up in suburbia USA, I'd never heard a bomb go off before. The closest I'd come to that were the M80 illegal firecrackers we set off in the cul de sac in my childhood neighborhood

Quickly dismissing the sound as perhaps an electrical transformer that blew, we walked another short block to the hotel and reunited with my much faster friends. Everyone was in full celebration with lots of cold beer flowing when others started to straggle into the bar with cryptic reports of what happened. All eyes turned to the T.V. and jubilation turned into horror as coverage began to tell the story of what had happened. I was numb but soon realized I'd better let loved ones who were following the race online know that I was okay. Phone lines were either intentionally "jammed" or congested beyond operation. I could not get a hold of anyone. Back home, my daughter was a senior in high school, and one of her best friends approached her in the hallway at school asking her if her dad was okay. "Why?, she later told me. "There was a bomb at the Boston Marathon." She knew her dad was there...no doubt she advertised in pride to many of her friends that day.

My daughter would tell me later she was pissed I didn't get ahold of her first but rather her "aunt Kim" who's the un-official family newswire. Our update finally went out over Facebook and would later see a flood of friends and family comment and thank God we weren't injured (or worse.)

My theory was that the culprit(s) had certainly had an escape plan. I envisioned, a walk, a bike ride, a subway, then train perhaps up to Canada then who knows where. It didn't feel like and would later learn it was not domestic terrorism. These were bad guys who hated America and decided that the Boston Marathon was "mom and apple pie" and would crush the infidels. They'd later learn (as Wahlberg quotes in the movie,) they messed with the wrong city.

The race euphoria disappeared and we decided we wanted to get back to the solace of our Beacon Hill home we'd rented. A reporter stopped to interview me still in my Boston Marathon finisher's jacket. I don't know who she was, nor did I see what channel she was from. Once in the Beacon Hill condo, I showered and the effects of the day started to settle in. Throughout the night, we heard helicopters. We were graciously offered to stay an extra day as I canceled my business plans for that week in Boston. The day after, we walked the city and saw that the Boston Commons had turned into a militarized zone in stark contrast to the revelry the day before where runners boarded the buses there to start their "once-in-a-lifetime" event.

We left Boston before the following weekend's events unfolded with the eventual capture of the "bad guys." It was unnerving to think they hadn't fled the city as I theorized. They partied and caused more carnage before one died and the other was captured in a tarped boat in a quiet neighborhood backyard. I honestly felt a bit numb the weeks following the marathon. I returned a month later for that business trip that was postponed and went back to the finish line area to see all the memorials that took over Boylston. It infuriated me when Rolling Stone Magazine featured one of the culprits on the cover. I threatened to boycott my local coffee shop and book store when I saw the cover. F*ck him.

All of those emotions slowly faded as life went back to normal and I returned to Boston the following year (2014) with heightened security and throngs of "Boston Strong" statements. I had no fear in returning. I felt it was a statement that their cowardly acts took lives and ruined parents dreams, but it made the city stronger and wouldn't impact my life. Marathon runners are known for endurance and resilience and Boston is a notoriously tough and proud city. What were they thinking? I think Wahlberg has it right. They messed with the wrong city.

That brings me back to the opening of the movie. I have mixed emotions about going, but I know I will go see it. My mom grew up going to the theatre when tickets were a nickle. She would take us to movies growing up and became part of my life as I take my wife and kids to movies and we debate with my boys about Wahlberg's movies. My son Jesse doesn't like his voice...or is that Matt Damon? We watch the Oscars and Golden Globes and bet on who will win. Yes, movies are part of the American fabric and my life. They can't take those liberties away from us.

Did you run Boston in 2013? Do you plan to see the movie regardless of whether you ran it or not?