Three tomatoes are walkin' down the street.
Papa Tomato, Mama Tomato and Baby Tomato.
Baby Tomato starts lagging behind, and Papa Tomato gets really angry.
Goes back and squishes him and says: "Ketchup."
Ketchup.

Name the movie that shared the above joke and a SeekingBostonMarathon.com sticker is yours. This metaphor came to mind as I'm way behind in providing updates so this is my ketchup (catch-up) post.


This week marked two months since the last time I ran in the Boston Marathon. Over the last eleven months, I've been sidelined with injury without running for five of those months. It's been difficult to write about running and triathlons when I'm not doing either. As I wrote HERE, the latest injury I've been working on is a torn hip labrum. This has been slow going as I opted for physical therapy vs. surgery. Other than the obvious, I chose this path as I wanted to salvage my 2015 season since I lost the second half of 2014. I made the local running store's (Runner's Roost) triathlon team only to stare at my race suit. I am also within a week of needing to start training for the New York City Marathon if I want to use my typical sixteen week training plan.

With all the above, here's what I've been up to. For starters, I'm uber excited to be hosting a session on growing your blog through social media at this year's FitBloggin' Conference which is being held in my home town (Denver) this year. This is my first time attending or speaking at a fitness conference and I'm crazy excited about it. I have a slight advantage in that my "day job" is sales so I'm used to preparing for presentations and I guess I'm a walking cliche as someone that gets paid to talk. This is quite a bit different as I'm talking about a passion of mine. Don't get me wrong, I enjoy my job and career, but let's face it, it doesn't compare to talking about running and blogging.

My session is this Friday morning at 8 AM PT. If technology cooperates, I'll be live tweeting during the event and if you can't attend in person, you can post questions you want the session to discuss in the comments section below or in the original post for your chance at one of four $50 gift certificates to Runner's Roost.

While I haven't been able to run, that hasn't kept me from spectating, cheering and volunteering at races lately. I volunteered two weeks ago at the Ft. Collins Sprint Triathlon where my son was competing. While I tended to body marking and ran a secondary timing device (first time for me,) he went on to finish in the top ten and first in his age group--a chip off the old block. 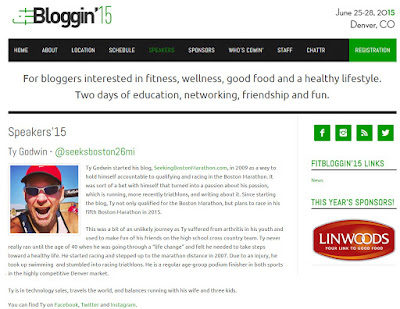 In terms of my rehabilitation, it's difficult to measure where I'm at. I have been going to Steadman Hawkins once a week for the last five weeks for intense P.T., and more recently have augmented that with visits to Accelerated Health who specialize in active release therapy. In addition to these sessions twice a week, I have a range of strength and stretching exercises that I do each day for 20-25 minutes. Overall, I can tell I have increased range of motion and strength in that right hip and glute (#bunsofsteel.) The other encouraging sign is that sitting for long periods of time at my desk or on a plane would inflame the hip. Flights no longer bother me for the most part.

When Steadman Hawkins gave me my initial diagnosis, the ortho surgeon told me"no running" but I could swim and bike. With my triathlon bike totaled last July in my accident, I finally replaced it with a Guru. I was close to buying new, but was able to find a low mileage bike on Craigslist purchased last year. The seller was getting married and not doing triathlons anymore. I "lucked out" as I was able to spend roughly $2,400 for the bike and added some Profile Design Carbon wheels. New...everything would have cost at least $5,000. I have maintained working out an average of five days a week alternating rides on the new bike and swimming. My swimming is feeling strong and "race ready." Just a matter of getting the "go ahead" from my doc on running.

This afternoon, I will head to Steadman again, and make a plea to begin some light running. I can't say the pain is entirely gone, and hoping a get a "green light" so I can "ketchup" on my training and resume my race calendar.