Three Things Thursday: Cruel, Cruel Summer and Something to Look Forward to

Readership has dropped this summer on SeekingBostonMarathon (SBM) as I've delved into more serious topics which has many wondering, where's the sequel to "Why Triathlons Are Like Frat Houses" and SBM's take on "Fifty Shades of Grey." Yes...a lot to deal with this summer including a loss of a friend, (Michael Fontes,) me stuggling with a new age group bracket, and last week's tragedy in Aurora, CO. Given that, here's my three random thoughts for Thursday which deals with a little bit of that, but has something to look forward to.

Another Loss:
It has been a tough summer for Colorado. The state was on fire for much of July and as I mentioned we lost a good man from my running group, Michael Fontes. He died doing something he loved which was running. Last week, Colorado lost another popular runner, Terence (T.J.) Doherty out of Boulder, Colorado. A runner struck down by a car just as Michael was. T.J. was only 32 and was engaged to another runner, Adrienne Herzog. Once again, a reminder for us to run and bike safely and hopefully raise awareness to drivers who have an imposing force advantage over those of us trying to share the road.  Thoughts and prayers go out to T.J., Adrienne and their family.

As I wrote about last week, Colorado is dealing with the tragedy that happened at the Century 16 Theatre in Aurora. Colorado is a resilient state in many ways. We produce many of the world's elite and resilient athlete's in running, cycling and Colorado Springs boasts the Olymplc Training Center. As we move from shock, anger, and depression over the events last week, we are focused on healing and building upon something tragic. Without any "press release" or fanfare, none other than Batman's Christian Bale showed up in Denver unannounced with his wife to meet with victims, police and hospital personnel. 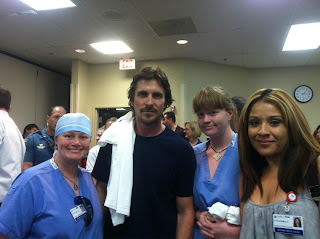 Bale had a bit of a "bad rap" for an expletive rant on the set of his Terminator movie, but given what I understand now, I think that was out of context. This guy just shot up above "super hero" status by visiting our state. He didn't have to. He didn't do it for glory or fanfare, but it made a huge difference to many that have been coping in our state--most notably the victims and the hospital and police that have dealt with this. Batman rocks!

On a much lighter note:

Our family is looking forward to the London Olympics which open tomorrow night. I am especially tuned into the running, triathlon, and swimming events--go figure. Living in Denver, 9News has been running interviews with local swimming phenom, Missy Franklin non-stop before stepping one foot into the land of great pubs and bad teeth. Yes...we're excited! As I'm checking my email, I come upon a clip from Jay Leno on an Australian hurdler, Michelle Jenneke and her unique pre-race routine.

Words can't describe her enthusiasm and dance...no she's not on drugs and she's wicked fast. Doesn't hurt that she's a beautiful young woman with many an endorsement ahead of her without lacing up her shoes in "London town."  She's gone viral. For those of you that think, I'm a dirty old man, you might be correct, but not in this case. She's a mere 19 years old and I have a daughter that's 17. What I can say, is that it's refreshing to see her enthusiasm before a race. Perhaps I can learn something about relaxing before a race from a 19 year old Aussie.  Unlikely that my pre-race dance will go viral, but I'm okay with that.
Email Post
Labels: 9news michael fontes michelle jenneke missy franklin T.J. Doherty Theatre Shooting