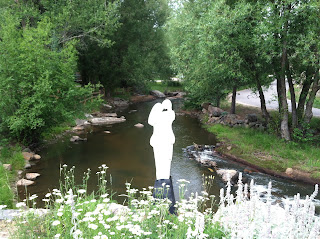 I finally met my match in my newfound sport of triathlon racing. Just as my first passion of marathon racing can humble anyone, I was knocked down a few notches in my last race at the inaugural Evergreen Triathlon. It happened to be this race was the morning after my 50th birthday. Yes...I said fifty...I'm still struggling with that one just as I stuggled in this race.  I figured, if I can do anything I want on my birthday itself, why not race? Mistake #1? Racing the morning after your birthday.

Evergreen is where my Mom grew up only an hours' drive from Denver in a small mountain town with a lake I skated on as a kid. I drank beer at as an adult at the infamous Little Bear Saloon on the short main street with one stoplight. I've taken my kids to the Little Bear for lunch long before the motorcycles line up outside and the beer and music flow. The boys were especially intrigued with all the bras hanging from the stage. "If these walls could talk." A fun little town I'd recommend.

The only advantage I had was that my birthday party was the previous Saturday, but I promptly went on the road to California to work for the week (or weak) leading up to race day and my actual birthday. Being an "alpha male," I didn't take the time off from training and managed to fit in running speed work and a swim on the road along with a busy work schedule. Co-workers wanted to make sure I "rang in" the 50's in style and took me out one night as well. Nothing wild, but that would be my second late night leading up to race day. Not enough sleep, not resting...the opposite...training too hard. Layer on the travel and my body's battery had "one square" come race morning. To top that off, we continued my "birth week" of celebrations with a rich dinner and too much wine Friday night and another one on Saturday night on race eve (Mistake #2; not resting race week.)

In Evergreen, we stayed at one of our favorite Colorado hideaways at the Highland Haven. Think high-end cottages with big comfy beds nestled in the woods along a creek. Fresh cookies were in the lobby, and the owner's dog was sleeping by the front desk. Our room had a fireplace and a hot tub. It only made me want to stay another night.

As I mentioned, my diet for the week was not the best and Saturday continued the trend...after all, it was my birthday. I "paid for it" on Sunday morning as I got up early to prep for my race. Once again, an unhappy stomach had me thinking...crawling back into that big bed sounded awfully good. I "sucked it up" after "crapping it out" for the short bike ride through town to the lake starting area.

After visiting the porto-potty a couple more times (Crap!) and setting up my transition area, I worked my way down to the water for the mandatory wetsuit swim start. Mistake #3 was not reading about the race. In the race walkthrough, the race director described the bicycle course as "challenging." For a novice cyclist without much hill training, the first seven uphill miles were going to be challenge indeed. An uphill battle for this newbie that was feeling "over the hill." With only a Sprint race (no Olympic distance,) the field was "stacked" with faster and more experienced triathletes. Perhaps my medal success in this new sport had me overconfident? Perhaps mistake #4.

In what would be my third ever open water race (and only fourth time in a wetsuit,) I thought I was doing okay as I head for the first couple of buoys in the murky water and (whatever the mountain equivalent of) seaweed. A lot of bumping and jostling "mosh pit style" for the first half. After the second buoy on the return trip to shore, I once again got off course at least twice. If I was a three prop boat, I was missing a blade as I wasn't swimming straight. My 1/2 mile swim was slower than my training run earlier in the week and about four minutes slower than my Denver Triathlon swim.

Perhaps I mentally took it easy on the swim knowing the hill climb I had ahead of me. My wife and I drove the course the day before which promptly freaked me out. "I'm in way over my head"...not on the swim, but on the bike I was thinking. I seemed to start out okay on the seven mile bicycle climb seemingly "holding my own" in terms of passing more riders than getting passed. There were a couple riders with their "50" mark on their rear calf who were in a "cat and mouse" chase up the hill with me. The last couple of hills, I was in my lowest gear, and lowest morale (why did I sign up for this?)

As they say, what goes up, must come down and the best part of the race was flying down the single lane road. With the race course open to traffic, I cursed under my breath at a Jeep that was actually going slower than me on the way down.  I had to brake for the car and pull slightly to their right--precariously close to the shoulder and had me thinking I was in for my first wreck. My last race I averaged close to 20MPH. While I was going probably close to 30-40 MPH down the hill, my average MPH on the bike leg was a disappointing 15.3. (I'd later find out.)

Both transitions were a struggle and showed my inexperience. As I compared to others in my age group, there's room for not just seconds, but perhaps a minute plus of improvement. After my transition from bike to running, I headed out for the (you guessed it) uphill start of the run. Did I mention I grew up going to this town...what was I thinking...that they'd somehow found the flat part of the mountain town? #naive

On the run, my tank was completely empty and even had to stop to fix my shoes that weren't quite on right. The run should have been my strongest leg but there was no mojo. After the uphill, the course traversed the dam's stairs up and down. My first race with stairs. Once again, I spotted a couple athlete's marked "50" and recall passing at least one of them and even passed a runner in his forties.  My 5K run segment was dog slow...three minutes slower than my last race.

As the bumper sticker says, "a bad day of fishing is better than any day at work."  The same can be said for running, racing and triathlons.  No doubt, I'm too hard on myself considering this was only my fifth ever triathlon.  I wanted a podium on my birthday, but got Imodium instead. Fifth in my age group and ironically 50th overall. Like many a marathon, I felt disappointed and felt I disappointed others.  A lot to learn and a lot of mistakes to eliminate--most of them before race day. As I was dealing with my race hangover on Monday, I thought, "get some rest." I ignored reason and swam on Monday and followed it with an excellent speed workout on Tuesday running 400's at sub six minute mile pace.  No doubt to erase the pathetic performance from my brain and to start working on improving my game.  No rest for the weary.
Email Post
Labels: beginning triathlete evergreen triathlon open water swim Triathlon triathlon training plan