My two teenage boys had been anxiously waiting for the premiere of the movie, "Dark Knight Rises." As boys do, they "ganged up on me" and tried to convince me to allow them to go to the midnight showing on opening night. I've "caved in" before and actually attended a Transformers sequel at midnight. With work on Friday and not wanting to pick them up at 2-3 in the morning, I gently let them down, but promised we'd see the film over the weekend. While we don't live in Aurora, we live a half hour away from the tragedy at the Century 16 Theatre. Just like many others, I awoke to the news and was shocked to hear it was so close to home. 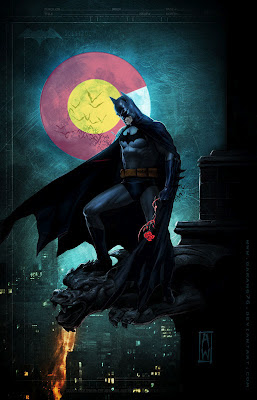 Colorado is no stranger to such tragedies with the world still associating our city with the Columbine shootings in 1999. My wife at the time was driving my daughter to dance lessons in the area and heard the gunfire and saw students scrambling. My brother lived next door to Dave Sanders who was the teacher tragically lost in the shootings.

As I was processing the news from the early morning hours, I couldn't help but wonder, "what if he'd picked Highlands Ranch," and "what if I let my boys go to the movie." As news of the victims came out, we learned my wife's best friend worked with Jennifer Ghawi. My sister-in-law knows one of the seventy people that were shot in the senseless crime. Just like 9/11, we were "glued" to the TV for most of the day on Friday, trying to understand why this happened and hoping that the number of victims didn't climb above a dozen. After learning about the firepower in the theatre that night, it's amazing that there were only twelve. Twelve too many however.

With a busy weekend of family activities, and going about my running life (I ran on Saturday and swam on Sunday,) I considered the words of the (visiting) President, Governor, and Mayor. Fundamentally, we cannot live our lives in fear and not enjoy the freedoms this country allows us. Last night, I took the boys to the movie they wanted to see last Thursday night. I was not going to let an aberration of nature rule my life or my weekend.

I couldn't help but feel for the victims as we nestled into our seats with our popcorn and candy. A police officer "stood out" in the lobby.  The theatre was practically empty...not what it should look like on an opening weekend of a blockbuster movie.  The exit sign in the theatre had an ominous glow. A similar exit that a coward 20 miles away used to enter and exit and terrorize innocent victims. My heart raced a bit not due to Anne Hathaway in a catsuit, but thinking about what happened thirty minutes into the movie.

It's a tough topic to write about. No words can replace people lost or provide comfort to those still mourning. Not much to learn from, but I had similar thoughts dating back to "Columbine." Where were the parents? Monsters are not born overnight; they were once children with parents who had the opportunity to teach them about right and wrong. Parents are responsible for teaching children respect for themselves and respect for others. If anything, all of this makes me want to work even harder on teaching my three kids what's right and wrong. Since they were young, we have pushed them towards healthy outlets (dance, sports, running, swimming, and the like,) and warned about dangerous paths in life.  I have but a few years left before they're gone from our house and even though many of their values are already "wired," I'll continue to try and mentor them as they head into this sometimes cruel world.