I fought the wall and the wall won. 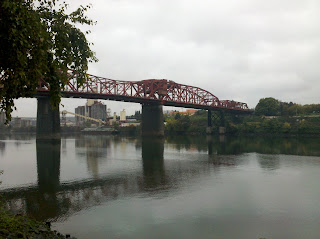 I keep waiting for the marathon that meets expectations or isn't a marathon effort. No such thing. There's a reason that not everyone runs marathons and even a smaller percentage that qualify for the unicorn race. This marathon thing is a humbling sport. While I ran my third Boston Qualifier, "the wall" kicked my butt in a big way in Portland this last weekend.

Leading up to marathon weekend, the big news was that Ryan Hall pulled out of Chicago. Ironically, I spoke to one of my running group's elite athletes a week before Portland (and Chicago) who also decided to pull out of Chicago--she broke down in tears talking about the disappointment. I felt for her and would have had the same reaction. In both cases, overtraining was mentioned as a contributing factor. Having hit the wall hard in my last two races, I focused my training on heart rate training and trying to get as much rest as possible including a "modified" three week taper leading up to the Portland Marathon.
The weekend overall exceeded expectations. Portland is a phenomenal city with much to offer--apparently, that includes rain. The forecast teased us all week with a potential storm and didn't disappoint. It rained most of expo Saturday and Sunday's race forecast included rain.
The sleep the night before the race is what you'd expect. Not the best sleep in the world as you're running through preparations and the race over and over in your head. As I've heard before, the most important night of sleep for a marathon is actually Friday night knowing that you will have to get up early Sunday and not likely going to sleep all that well on Saturday's race eve. I had that one covered as I slept fantastic Friday night. The condo we stayed in was on the Williamette was perfect; comfortable, relaxing, and included nearby train no 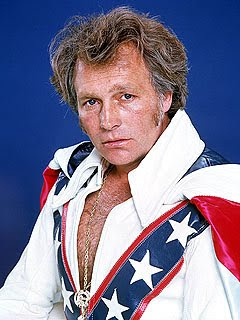 ises which actually provided a bit of a calming effect.
Race morning was somewhat uneventful as I went through the pre-race ritual. Light meal (or was it too light?,) extra lube considering how wet I was going to get on the course, and heading towards the race's starting corrals. Staying next to the river meant a .6 mile walk to the start through Union Station. I had the sweatshirt and garbage bag covering me up as I walked towards Taylor Street up 6th. A homeless guy yelled at me, "hey Evel Knievel!" (Evel was a legendary motorcycle daredevil from the '70's.) Must have been the shoes, but perhaps it was a Nostradamus prediction of the crash that awaited me.
I have used pace groups before and donned the 3:15 pace bracelet and sought out the Team Lizard (local running group) pacers. Arriving early, I got into my pre-race zone and watched as the rain seemed to pick up. The overhead announcer threw out some statistic on annual rainfall and that in all his years; this was one of three that had the wet stuff. In other words, if I ran the same race the next seven years, I'd be dry.
I met a couple of the other runners in the 3:15 group who were hoping for their first Boston qualifier. Sort of a "." Like the HBO show, you knew that some would make it and others would not.
Among last minute changes (never a good idea,) I made was to wear my heart strap in the race and went with a lighter shoe (ACICS Speedstar) which didn't have as many miles on them as they should have. I've run my last two races in a lighter shoe vs. my every day ASICS 2150's. I'm glad I wore the heart strap and wished I had my old reliables after the race.
The first six miles seemed effortless, although I think I now know what "water boarding" feels like. The first few blocks the runners tried to avoid puddles as we weaved around downtown and the riverfront area, but we all quickly realized that was a moot point--our feet were going to get wet. Wearing the heart rate monitor was comforting as my heart rate was in great shape at this stage running a 7:30 pace.
The toughest part of the course as advertised was mile 16-17 with a climb towards the St. Johns Bridge. Our pace group leader warned us that many feel the worst is over and overdo it on the ensuing downhill once you crest the middle part of the large span. Only problem is that there's a short hill right after the downh 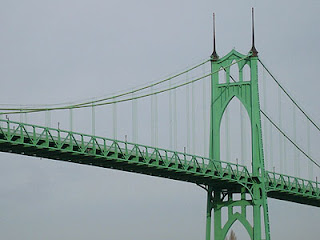 ill. I started to see separation with my pace leader somewhere along the bridge. My heart rate hit a spike of 158 which should have kept me below my lactate threshold, but I was just plain "tapped out," tired, exhausted.
Like Boston and Steamboat, I wound up taking a couple walk breaks which took my heart rate back down to practically nothing, but I'm fairly certain this wasn't a heart rate thing, I believe I was feeling the effects of four marathons in ten months. Considering I'm in my 40's and not in my 20's, that's not something I'll be doing again any time soon.
Like many marathons, the first 20 went somewhat as planned, but the half marathon waypoint to mile 20 my average pace dipped below an eight minute mile. A snafu with my Garmin when I got home lost the detail (an un-advertised feature of the 110 locking up at inopportune times as it choked when my home computer went into standby mode.) My recollection is that my "wall hit" was closer to mile 17 vs. mile 20. I've had a lot of crazy thoughts enter my head in the delirious phase of miles 20+ in a marathon, but this was the first time, I actually had the word "retirement" enter my head. Being an MP3 friendly race, I turned on my iPod at mile 20 thinking that would rid the bad thoughts from my head. Ted Nugent's "Stranglehold" seemed like a good idea on Saturday, but made me want to vomit, so I turned it off.
Not thinking straight, I knew that 3:15 was not going to happen, but in the back of my head, I knew that running a BQ 3:30 was possible. The downhill stretch around mile 22 with the city in view gave me a boost and I headed into the city at a respectable pace. As I hit my second bridge, the Broadway Bridge, I started to see my best friend Jim in the distance. Given the giant loop course; my friend, wife, sister (her husband and my nephew) were able to catch me four times on the course vs. a typical point-to-point course where you sometimes only see loved ones once.
As Jim's orange rain jacket came in view, I felt that I'd disappointed those that traveled far to see a PR effort. In pain and slightly embarrassed, I avoided eye contact with him. The second time that day I avoided eye contact...the other was hours earlier with the homeless guy that identified me as "Evil Knievel." Being a runner, Jim knew not to say, "you're looking good," or "you're almost there!" Good to have a veteran cheerleader at mile 24. "Grind it out" he yelled and that seemed to do it. I crossed the finish line (it was still raining) cold, sore, but literally seconds under the wire to qualify for Boston for the third time in the last four races.
The runner's trough was amply stocked with the usual fare, but I must have looked like someone who just came off a deserted island who hadn't eaten in months as I devoured bananas, cinnamon bagels, yogurt and the most awesome oatmeal cookies I have ever eaten. I know I circled back at least once to go through the line, but it may have been twice. I added my seventh marathon medal around my neck as another one that was earned for sure.
Epilogue: Something to do with the rain perhaps, but I have a wicked cold two days after the race and wound up taking a two hour nap today that seems to have helped re-charge my battery a bit. My Achilles is starting to feel back to normal and I have NOT been pouring over web sites looking for a marathon to run in two months. My plan is to rest for a couple weeks and get into a maintenance mode leading up to mid December. Mid December? Boston marathon training begins. Six months away vs. two or four months sounds much better. Getting plenty of rest and having an ample taper time will be the plan. The good news is that the heart rate plan appears to be paying off as witnessed by the low heart rate my entire race and "shaving" six minutes off my half marathon PR last month.
Author's Footnote: I acknowledge that walking on this earth is a privilege. I understand that many will never experience the euphoria of a marathon and many will never get to "don" the unicorn of the Boston Marathon. I realize that many fellow arthritis sufferers have difficulty with everyday tasks. I may have come across as ungrateful for the experience in my last race and that is not the case. I sometimes have an un-healthy dose of "type A" competitive nature that strives for the best in many things I do. Just like the desire to get to Boston, I know I can run a 3:15. The quest continues as registration for Boston is this coming weekend.
Email Post
Labels: 26.2 boston marathon marathon runner marathon running portland marathon qualifying for boston marathon