An update to my 48 hour blog post below. Friday night's dinner exceeded expectations as we 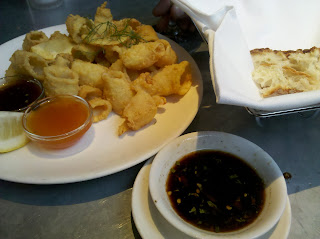 took in Paragon in the heart of Pearl District. Probably the best calamari I think we've ever had; lightly breaded, not rubbery at all and boasted a spicy apricot and soy lime ginger sauce. I went with the ahi tacos for the entree with a local Syrah. Excellent food and ambiance!

Saturday is always expo day. I woke up after a great night's sleep to something outside--that call it rain. The forecast all week has been flirting with various storm front news and "mother nature" delivered. Gray skys and light rain--no problem. A cup of Joe in the condo and off to the Portland Hilton to meet the DailyMile folks for the meet-up run and breakfast. Brooks hosted us and rewarded those that showed up with a cool running hat (now I have three to pick from for tomorrow.) 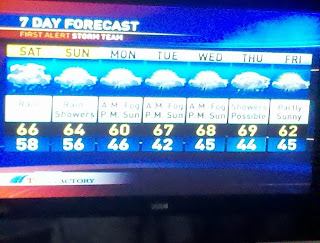 couple the day before, it gave us insight into the wet conditions we'd be facing tomorrow. I took an informal poll on DailyMile and Facebook and most everyone agreed; the more clothes you wear, the more wet clothes you will be wearing. Light gloves and a hat, but avoid the rain jacket as you'll just heat up. The test run this morning confirmed that.

At breakfast, it was great to meet folks you've met in the cyberworld and we even had one of the DailyMile founders show up. A great Saturday morning activity.

After brunch, we headed out for Pastaworks in the cool neighborhood of Hawthorne. This was a little gold mine of a find for a carb-seeking runner as the name indicates, these guys know pasta. 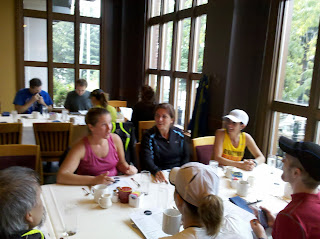 Tonight we will be hosting a small pasta dinner for 6-8 folks back at our river-front condo. (We've done this before at San Diego and it was a lot of fun to have a small group of friends/family and avoid the normal Saturday night restaurant.)

Pasta, homemade bread, marinara, puttanesca, wine, and salad are on the menu for tonight joined by family, Vince from my running group in Denver, my best friend Jim from High School (who came out for the race,) and a local ex-co-worker friend are joining us for our riverfront dinner.

In the afternoon, we hooked up with my buddy Jim at the expo to soak it in and dry off. It's a smaller expo, but did the trick. I stopped by the KT Tape booth and got a plantar fasciitis tape job (it's just a tad tender) along with my pace group pace bracelet. 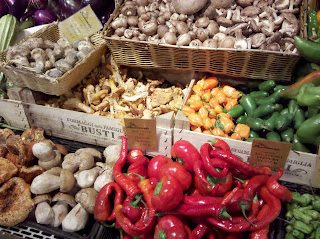 An hour before dinner, and the incessant rain has temporarily stopped.

No turning back at this point. Arriving at Portland's International Airport, I was thinking to myself, "am I actually going to run another one of these things again?" I have arrived in the "City of Roses" and I'm a mere two days (37 hours and 12 minutes, but "48 hours" sounded much better.) Last night I woke up at 4 something in the morning wide awake staring at the ceiling--sound familiar? I watched T.V. on the couch and eventually crawled into an empty bed. You'd think my mind was occupied or something. 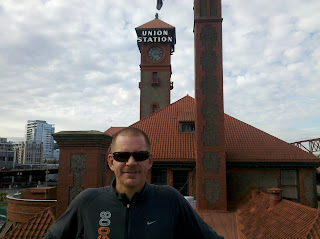 Getting out of Denver was somewhat uneventful vs. the hours spent packing and contemplating. "Is it going to rain on Sunday?," which gloves to bring (I brought two pairs,) should I bring tights in case it's cold (I brought two pair,) shorts, three pairs of shoes, body glide, enough goo to get me to Seattle, sunglasses, three hats, my iPod (not sure if I'll use that or not yet, but it is the MP3 friendly race,) Amphipod belt, Oakleys, and I'm sure I forgot something. On top of all that, I brought my traveling chiroprator and massage therapist in the form of "the stick" and my foam roller to iron out any kinks between now and Sunday. I generally get a lot of "what the hell is that thing for" curious looks going through the airport with a huge foam roller and for the first time a "by the book" gate agent nearly counted it as a third carry-on. I "jedi mind t 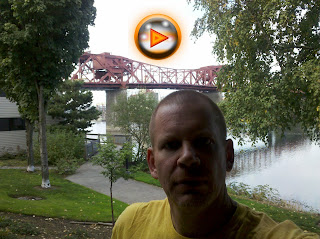 ricked" her into letting me board with it.
Some Sudoku, ESPN, sports page and a good snooze characterized the flight and we're here.
Once again my wife scored a coop on the accomodations and we have a condo right on the Williamette with train sounds (good sleeping sounds but it's the real thing, not the CD variety) lazy river, running path and bridge right out my window. Ahhh...runner's paradise... (see my condo interview to the left.) As I write a small speedboat just cruised by--this is the perfect place to relax and amp up for the race.
I've got to run as we're heading out for a little bit of downtown Portland and dinner. I'll update as we approach the race. Chow!
Email Post
Labels: 26.2 beginning marathon runner portland marathon running