Battle in the Burbs: Father vs. Son

"Nothing quite as beautiful as the moment a child's spirit breaks." (TRU TV: Toilet Paper Cake Episode featuring the two athletes in this post.)

Oh what to do when you have two "circle the calendar" races on the same day? Last weekend was a highly consternated yet easy decision to opt out of the Georgetown to Idaho Springs Half Marathon (one of my favorites) and go "head-to-head" with one of my boys in my hometown triathlon, the Highlands Ranch "Splash, Mash, and Dash (SMD)." I covered the decision in my "Torn Between Two Lovers" and "Three Things Thursday" blogs. Shin splints, lack of training for a half, and my son wanting to "school" the old man lead to the right choice of racing the SMD. Bring it on little man! 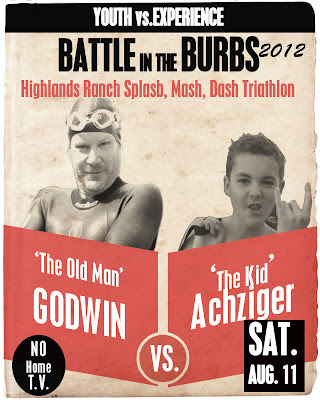 I shouldn't say little, my youngest (Keenan) is a mere 13 years old, but looks like he's ready to drive a car. He is not quite my height, but we both know that in a short while, he will tower over me. He reminds me of that often. He started late in competitive swimming as he's only been doing it for a few years, but has a knack for it and the lanky body and wingspan that shows great potential. I started late in swimming...as in 35 years later in life than he did, but he's on the DU (Denver University) Hilltoppers Swim team, and I am not.

Once I informed the family of my decision a mere few days before the "Father Knows Best" show-down, the smack talk that occupied the dinner table disappeared as we both were getting our "game faces on. Keenan has a similar number of triathlons under his belt which is not a lot for either of us, yet the night before and morning of the race, I tried to impart some fatherly wisdom. Both my boys have a typical reaction to such advice..."I know!" Some of the tips I shared, I got off YouTube since I have no triathlon plan, coach, or even a book I've read on the topic.  I do know a little bit about running and know how to launch google on my laptop. You think I'm joking...there's some great transition videos and even a bike cornering video I've found useful...I'm starting to think I might be able to learn a swim "flip turn" the same way.

Despite rebuffing my advice, on race morning, my son couldn't locate his helmet, hadn't mounted his bike number (did you listen to the orientation talk?) and asked if he could mount his bib number on his back. I bit my lip and said no, "it goes in the front."

There were four races with the Splash, Mash, and Dash. My son was in the youth group and I registered for the sprint distance (the third and fourth options were olympic distance and relay.) Sprint seems to be my "sweet spot." This sprint had a swim of 500 yards, the same (as youth) ten mile bike ride and 3.5 mile run.

With a ton of swimming this summer, Keenan was well-prepared for the swim, but didn't put in the time on run and bike training (not normally a good formula for me or anyone for that matter.) His swim segment seemed effortless and he later confided that he was saving (translation: "sandbagging") his legs for the later two segments. His final result was an impressive 1:07:07. Good enough for third overall in the youth race and his first podium.

As Keenan was coming in to T2 (Transition area two--from bike to run,) I was heading towards the pool area for my swim start. True confession is that I had my own rookie error that morning. I had picked up my ankle timer earlier and had walked over one of the timing mats in the pool area to go check on Keenan and my bike. Doh! That's not good as it could have triggered an early start. I confessed to the race director and the guy in the Colorado Race Timing booth. We all figured it would be sorted out after the race. As it turned out, the chip was in my hand and hadn't triggered the mat. Color me stupid.

I went through the "mating dance" in the pool deck area to find three other swimmers with similar 500 yard times for the, "four to a lane circle swim." For the runners or non-triathletes, that's what it sounds like. You have four swimmers sharing one lane started moments apart--not sharing half the lane, but following the same circular pattern. You have the opportunity to pass by tapping the person's foot in front of you. Fundamentally, you want to be "grouped" with swimmers of a similar pace so there's not a lot of passing going on. Thus...the mating dance.

The unique thing about the SMD, is that it's split into two pools; 11 lengths indoors and 9 lengths outdoors with a "transition" run between the two. Like Keenan, I felt like I was comfortable on the swim leg and probably could have pushed it further. Having said that, my time in the pool was a respectable 9:56 including the indoor to outdoor pool transition. My first transition was one of my better ones by getting out of T1 (transition from pool to bike) in 1:11.

Being in one of the earlier swim groups, there were few people on the bike course and felt good about my time on the bike. I passed quite a number of folks and (I believe) was passed only once myself by a relay team member. The course was roughly uphill the first half, but as they say, "what goes up, must come down." The second half was a fun downhill with one challenging "hard right" onto Broadway and the home stretch. My goal was to hit at least a 20 mph average on the bike and finished with a 19.9. Slackard.

After another respectable transition of merely a minute, I was off to my core competency--the run. If you live in Denver or know Highlands Ranch, it's anything but flat, but felt pretty good as my aforementioned shin splints weren't an issue on the three and a half mile course which was a mix of asphalt, concrete and trail path. Same deal as the bike in that I passed a few folks and didn't let anyone pass me with a 7:03 minute per mile run pace. I was okay with that considering it was more uphill (it felt) than down.

Final verdict was a finishing time of 1:06:57. Good enough for my highest ever overall placement of fourth place and my second overall first place in my age group. The only time you feel that it's good to get older.

As far as the unspoken bet with my son, there was no "in yo face" or "I schooled you and ruled you" smackdown talk. In fact, I was full of pride for the father son tandem finish. I realize that it's only a matter of time before there's a "changing of the guard" and my son will start lapping me on the course. He is now officially a high school student freshman as of two days ago and is on his cross country team. I believe he has "un-tapped" potential to emerge as a force as a triathlete in a growing sport.

Across town at the same time, my daughter was marching in a parade as a senior in high school on her pom team and Keenan's brother Jesse was at martial arts working on becoming a black belt. Overall, a proud day for a proud dad.