DNF is Not a Four Letter Word

Those dreaded three letters. "DNF."  Did not finish.  Unlike MNF (Monday Night Football) that we look forward to, DNF is the word that no runner wants to utter or swimmer wants to mutter.  Why is that? 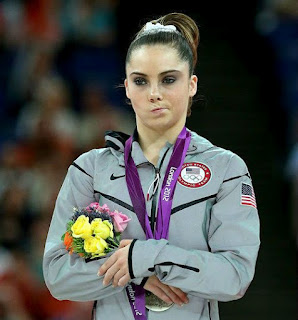 We are fresh off the Summer Olympics and one of the images that is still swirling the internet is of McKayla Maroney looking all pissed off with her silver medal.  It's spawned several parody sites of "McKayla is not impressed."  Right or wrong, our culture is obsessed with winning and even more so, not quitting.  Sometimes we don't know when to quit (see Republican Senator Todd Akin.) Um...Todd...I think you should throw in the towel on that one, because you just committed political suicide.  You should quit.  While quit is literally a four letter word, it's sometimes the right choice.  Sometimes your body just quits. 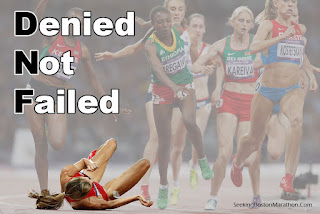 Back to the topic of DNF, or "did not finish." Perhaps DNF should actually be "Denied Not Failed." Also in the Olympics we saw Ryan Hall drop out at mile 11 of the men's marathon and Desiree Davila dropped out a mere two miles in the women's marathon.  Davila notched her first ever DNF in a marathon.  A thigh and a hip respectively kept Ryan and Desi from finishing a race they'd trained so hard for.  We don't know what to say to another runner who has to drop out of a race, but I'd argue that their performances are often just as courageous or even more courageous than those that got to run injury free in the race.  Davila trained on an anti-gravity treadmill and took cortisone shots to try and "lace them up" for London.  Brutal disappointment.

This week, closer to home, Colorado hosted the Leadville Trail 100.  Arguably the worlds toughest race; high altitude "start to finish," rugged terrain, and "oh, by the way," it's 100 frickin' miles.  I am not an ultra runner, nor do I have plans for this insanity anytime soon.  I can say that "amazing" comes to mind when I hear of those who signed up for this mountain monster.  I had a number of running friends in the race this year and two of them (Amy Schneider and Michael Aish) were victims of the mountain...and the dreaded DNF.

Michael had actually won the qualifying Leadville 50 and was "gunning" for a win in the 100.  He was featured in Outside Magazine talking about his transition from Olympic marathons to the crazy sport of ultras.  Amy was running her second Leadville and has also transitioned her wicked fast marathon game to the ultra world.  Michael had to "bow out" due to hip flexor issues and Amy had difficulty breathing with fluid built up in her lungs.  No shame for these two...in fact, an incredible amount of respect from this guy.

As I was beginning to gather my thoughts on writing about DNF, another story popped up this week on the woman trying to swim from Cuba to Florida.  One hundred miles.  I will go swim a mile today in a heated pool.  I will not have to encounter Jellyfish attacks like she did.  I will not swim among sharks without a cage like she did.  I will not encounter squalls...she came up against two.  Lighting will not be an issue for me as it was with Diana's 60 hours in the water.  She DNF'ed. but she made it halfway there in her fourth lifetime attempt.  And by the way....Diana Nyad is 63 years old.

The amount of work that goes into something like Diana's swim, the Leadville 100, or training for a marathon is an amazing accomplishment in and of itself.  There should be no shame in dropping out when you've pushed your body to the limit, but it has no more to give.  DNF is not a four letter word and while Kayla may not be impressed, I certainly am.

Have you had a DNF...what do you think of those that suffered a DNF?