I Was Beat Up By A Ballerina

I will leave no stone unturned to explore something that will give my body an edge in my training or in a race (iron IV drips, turning myself into a swimmer, shaving my legs, and doing Yasso's in a Target parking lot,) but this is really stretching my comfort zone. As part of my hardcore core training mission I've been on lately, I took to the ballet class. No, that's not a typo. My wife knows how to lure me into something as she promised I would be the only male in a roomful of hotties (herself included.)

I have to admit, it seemed a bit like getting behind enemy lines or fulfilling my grade school fantasy. In the later case, if allowe 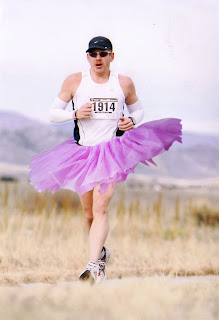 d a super power, I always chose invisibility...of course to head straight to the girls' locker room. At this point, I should ask that you refrain from the hatemail...there's nothing wrong with the female form. Why wouldn't I want to spend an hour getting fit in a roomful of women in their little yoga outfits.

Our class was at Ballet Physique in downtown Littleton, CO. With some yoga class experience under my belt, I felt okay with my manhood and had little problem walking into the studio. You could tell that I caught them off-guard, but they went through the normal check-in as I filled out the new ballerina profile and checked the box that I was NOT pregnant.

Trying to assimilate, I merely copied the pre-class routine. Pick out hand weights...alpha male went for the 8 pounders. Don't you have some 35's I wondered but kept my mouth shut. I saw mirrors, a bar (my wife corrected me that it's a barre,) a 24" mat we never used (and I still don't know what it's used for,) a yoga mat and a rubber ball--do we get to play dodgeball? Sweet!

The class was "tag-teamed" by two instructors that took turns tightening up our tushes..."just think about how your jeans will come on easier after class" they'd say. I wasn't thinking about my jeans. Concentrate, try not to embarrass yourself, and don't stare, or get caught staring.

I have to say that the class completely kicked my ass. One hour of ass work when I don't own one to begin with was torture, but there was plenty of other body sculpting; biceps, triceps, quads, calf muscles, hammies were all screaming for the solice of the swimming pool or crushed pebble running path lined by shade trees. I know I will be feeling it tomorrow and am convinced this is some serious core stuff. Some poses I'd seen in chick flicks or in yoga class and one resembled a hunting dog. I did my best to mimic the others. 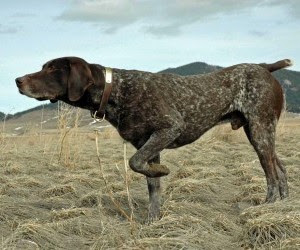 My wife was shocked that I went and excited that she excelled in something athletic over her husband--not fair as she's trained as a dancer.

While pondering the strength benefits of ballet this evening while writing, I googled "males whose wives coerced them into a ballet class under the guise of core training" and found an interesting article from 2008 by Professor Tim Watson and Dr Andrew Garret. They compared the fitness of ballet dancers from the English National Ballet with the British Olympic Swimming Team. They measured the athletes on a range of fitness tests including strength, endurance balance, flexibility and psychological state. The Ballet dancers came out top in seven out of ten of the tests and were 25% stronger than the swimmers." In yo face swimmers and runners!

I had to bolt to my day job after class, but the questions after class ranged from, "is that your husband?," "I've been trying to get my husband to come," and "he's brave!" Not brave...just working on my core and getting behind enemy lines.

Footnote: I apologize to all the husbands and boyfriends whose partners were in my class today. No doubt they got the lecture over the dinner table tonight that "so and so's husband went to class, why can't you?!"
Email Post
Labels: 26.2 ballet strength training beginning marathon runner male athletes and ballet marathon cross training marathon runner marathon running