As I feared and wrote about in my blog earlier this month, my "barely qualified" for the 2012 Boston Marathon was not good enough for the Boston Athletic Association as I came up two minutes and twelve seconds short of being an entrant to next April's race.

As much as I'd convinced myself that I'd be okay and go with plan B, this was a kick to the gut (or Jeff Gillooly crowbar to the shins.) Denied by New York and Boston in the same year. Ouch! I haven't endured this much rejection since 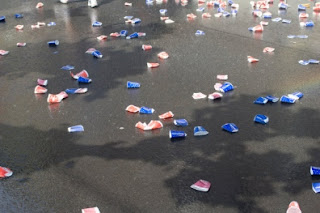 Jr. High. I have drank from the BAA chalice twice (in 2010 and in 2011) and last year's BQ minus nine would have certainly got me in this year, but this is the year that wasn't meant to be.

For those that have followed my pilgrimage this last year, you know that I had some setbacks with my running. Dealing with a lot of personal stress in my life, I just simply overdid it. Perhaps using running as some sort of elixir, but just ask Charlie Sheen, anything done in excess will not end pretty. Five marathons in eighteen months was my Charlie Sheen moment. I knew in the first few minutes of this last April's Boston that I simply had no gas left in the tank.

Dealing with Dr's orders not to run another marathon in 2011, I decided not to quit, but to make my body stronger through weight training and cross-training. Little did I realize that there was also a swimmer inside me as my d 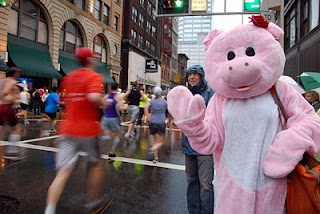 esire for competition lead to three sprint triathlons at the end of my summer. I have noticed a big difference in my core and upper body strength that will hopefully carry into my 2012 campaign.

The burning question in your mind, is what now for a runner (and emerging triathlete) with a blog named "Seeking Boston Marathon?" As I pointed out in my last blog, "someone (DP_Turtle) asked me will I change the name to "Sought Boston Marathon?" While it made sense, it didn't. Lays potato chips. Once you have one, you can't stop. Gluttony. Still seeking Boston." I'm holding to that. In fact, just as my first marathon time of 3:42 only motivated me to shave off twelve minutes to qualify the first time, I'm just as pissed that I did not hit my goal and I'm sure it will only fuel me in my 2012 training and races.

Soooo...what mary do I run now that my calendar is open in April? You get to vote, but the short list is two races I've wanted to run that were too close to Boston;

Beyond what race is next, I have three additional goals for 2012; get a BQ minus ten, go for a NYQ, and resume my triathlon career again next summer. Ironically, I got my Dear John email moments before going out for my lunch run. With fire in my belly, I ran the tempo portion of my five mile run at a 6:58 pace. I guess you could say I've got something to prove.

For those that made it for the first time, enjoy every minute of it, and I hope to see you back there stronger than ever in 2013. The quest continues...still seeking Boston Marathon.
Email Post
Labels: beginning marathon runner boston marathon new york marathon qualifying for the Boston marathon runner running