You don't suppose I have some healthy addiction issues do ya?

I have figured out how many marathons I can (or can't) squeeze in a year, but how often can you run sprint triathlons? I can tell you that my body does not feel like it's been dragged by a truck after a sprint like it does after a marathon so I completed my third in six weeks in Parker, CO last weekend at the "Fall Frenzy Triathon." 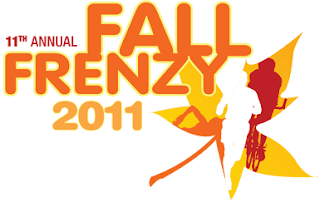 Just like with marathon'ing, there's so much to learn and so much room for improvement so here's the race report from my third.

The "Weak" Leading up

What is it with me getting sick the week of a race? This wasn't the best set of conditions for my third foray into triathlons as I came down with a stomach bug the week (or weak?) of the race. I've repeated the sickness rule before...if it's above the neck (i.e. a cold) then strap your big girl panties on, suck it up and get out there and race. Below the neck...(as in stomach) then you're best not to race as de-hydration is not a good thing and can be quite dangerous. I am all male and rarely listen to my own sound judgement.

Ironically, one of my best race days was in the Georgetown to Idaho Springs Half Marathon last year with a similar stomach bug. In that race, I was in the porto-potty moments before the race debating if I could make it through 13.1 miles. I did...and blew away my previous PR with a 1:32 (two minutes off a NYQ.)

Being a borderline Darwin Award winner, I was determined not to let my $90 registration fee go in the toilet per se. As I did in my last TRI, I decided to ride the course earlier in the week. While I was hopeful, that I'd get a fast flat course, it had a bit more hill than I'd expected. No worries. Despite knowing better, I headed out on the (dry run) course without a spare 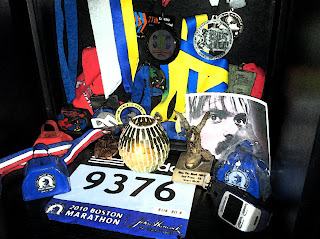 , and sure enough, at the halfway point, a flat tire. Four miles from my car. I pushed, jogged, and ran with my bike looking like a M-O-R-O-N back to the car. I could have walked, but this was on my lunch hour and had a conference call with my boss I had to make. I'd bought the bento box, spare, bike rim tools and nitrogen which were all in my car. Brilliant. A cyclist stopped and asked if I needed help. I lied and said my car was close. A self-punishment if you will.

Leading up to the Race

With the swim times staggered based on projected 500 yd swim times, I didn't need to be at transition set-up until 8:30. Due to race nerves and stomach issues, I was up before the alarm went off and got to the transition area early so there were plenty of decent rack spots to pick from. This also gave me extra time for hitting the restroom (twice.) I enjoyed watching the first few swimmers enter the area. The race started with the slowest swimmers, and I picked up a few things NOT to do. One dude was wearing board shorts. Another guy with a lot of expensive stuff must have spent four minutes with wardrobe changes in T1. A slight curve with this course was that the indoor swim at the recreation center was a good 1/10 of a mile from transition. At the race meeting the day before (which was quite good) they'd mentioned that some runners position their shoes outside the door of the recreation center if they don't ride with bike clips. I haven't advanced to the really nice bike with clips so I put my running shoes (with elastic shoelaces) by a tree and hoped that I wouldn't forget I put them there vs transition. As I entered the pool area I started scoping out what times were swimming and what group I should be in. I must admit, this feels like some sort of mating ritual. I felt this is where I showed my inexperience as I'm still figuring out my times. Being conservative, I looked for 9:15's (500 yard times) and found three others to circle swim with. They looked fast, and one was a swimmer by trade...vs. me entering the sport as a runner. I started to self-doubt I was in the right group and they'd determined I was "fast" so I would go first. What?!? I think I (literally) pissed myself in line (see #12 of reasons "Why Triathlons Are Like Frat Houses.") Nerves, stomach, fast?!? Not.

The water was nice and warm and I started off as the first in our circle swim group of four. Triathlon etiquette is a tap on the foot of the swimmer in front of you should indicate they let you move ahead of them at the end of the lane. I gotta believe my endurance has built in the short two months I've been swimming and I passed two in the 500 yard segment. Aside for slowing down to pass, this was the first race that was all freestyle for me--my previous two races required quite a bit of breast-stoke as I couldn't go the distance all freestyle. A race segment PR for me as I "cracked" the nine minute mark for the first time and seemed to have decent lungs for the short run to transition (in the shoes I remembered by the tree.)

The transition was somewhat un-eventful and like my last race, I decided to go commando on the socks or sans socks. I felt my bike segment was also one of my better performances with a 19.3 mph pace over a 12 mile loop course. I'm glad I rode the course once before as I noticed during the race and talking to some folks after the race that while marked, there were a lot of people who went straight when they should have turned. One thing that may have helped would be the arrows marked on the pavement. Where there were turns, they'd sprayed a series of staight arrows with last one (or few) indicating the turns. I met one woman who was disappointed in getting second or third, but had added some mistake mileage on her ride. Ouch. I was passed on my clunker bike by a couple, but passed more than passed me. Second transition was also uneventful.


"Now you are on my turf!" I felt strong heading into the 5K portion and passed a number of runners on this leg while only getting passed by one younger (thanks to the back of the leg marking) man. One of the runners I passed was a guy from my swim group that passed me on the bike course. It was ironic as he and one of the other female swimmers lamented before the race how the run was their weak segment and hated it when runners would pass them during the last leg. My family was "double booked" this day and I gave them a "hall pass" for skipping the race so I had no one I knew to push me during transition or approaching the finish. I improvised and "egg'ed on" the crowd as I went into my sprint to the finish line. My run leg was a respectable 7:24 pace, but far off my 5K and half marathon PR pace. Given that I have taken the summer off from hardcore run miles, I was happy with this.

Final tally. A 1:11 overall time for a 500yd/12 mile/3M triathlon. An embarrassment of riches...my third medal in as many trys in my age group to add to my bookcase collection. My online triathlon buddy Morey chided, "why are triathletes in Colorado so slow?" I don't know...perhaps I've just picked the right races, but there are no asterisks on medals. After taking 10 years to get two medals in running, I've snagged three in six weeks of my brief triathlon career. If I weren't hooked before, I guess you could say I am now.

* Author's footnote. After I received my medal above, they announced someone who had a timing chip issue and decided there was a tie for second place in my age group. I guess there are asterisks in races, but I'm not giving mine back.
Email Post
Labels: 500 yd swim 5k half marathon masters swim swimming triathlete Triathlon