Last week was work, but it was also a trip of a lifetime. I had several of my friends post on my personal Facebook page, "now, what exactly is it that you do for a living?" My itinerary had many wondering as my run world took me on the road to Moscow, Cairo, and Dublin. I know...it sounds like an "Amazing Race" t.v. show episode, but it was not. I began to reply (in sarcasm) to some of my friends, "I'm a double-secret agent," but that was when I was still in Moscow, and hit the backspace button on my Facebook status thinking, "this is not a very good idea."

There's likely a full post on each city and country I visited, but I'll save you from that and instead share the highlights of new runs added to my world adventures. Before I get to my first destination, there was a layover in Brussels. Half asleep in the airline international lounge, I spotted someone from the running world. I took a double-take, then asked, "Are you Jenny Simpson?" Sure enough it was her. She'd finished (disappointing for her) 4th in the mile there. She was on her way to New York where she'd win the 5th Avenue Mile. We chatted up running as she lives in nearby Boulder where I've trained and knows my running coach, Benita Willis. Super nice woman, and gracious enough to pose for a fan photo. Great run karma to start the trip!

To start with, this trip required a visa which was complicated enough, but once secure, this was the first leg of my amazing race trip. Given my age, I grew up with the "Cold War" and never thought I'd visit this country. I'm not sure what I expected, but I had visions of people standing in line in for a loaf of bread. Not exactly, but I was not expecting the wealth and western influence I'd find in Moscow.

We stayed at the Royal Aurora which was around one kilometer to Red Square. Once checked in, we head out to see the images I was so infatuated with as a child. At no time during my trip to Moscow, did I feel worried for my safety. In part due to the western feel of the city, but also due to the dense crowds. The Boshoi Ballet and State Historical Museum were both awe-inspiring buildings we took pictures of on our first night. We'd wait until the next day to get more pics of the Kremlin and famous St. Basil's Cathedral.

In terms of the people, I found them to be quite friendly and receptive to us once they'd learn we were visiting from the United States. I wasn't sure what to expect considering the tense relationship our governments currently have. Our first night, we chatted with some college students who we could tell were enamored with our country and referred to us as "Americanos." I'd hear this a couple days later when I went on a run that veered through the Red Square area--I was the only runner I saw running in the city which is what must have given me away as an "Americano." The only runners I'd encounter were in my run destination that day; Gorky Park.

The only other impression I picked up from the locals on the politics was that one man I spoke to was not keen on the direction of the country and didn't agree with the situation in the Ukraine. While the country made much progress since the "cold war," he felt their leader was taking the country in the wrong direction.

In terms of dining, I never was bold enough to try Russian borscht. I'd save that experience for the next trip. The food there was fantastic including the Novikov Bolshoi within walking distance from our hotel.

This is where eyebrows started to get raised. Wait a minute, I thought you were in Moscow, now I see you sitting on a camel. WTH?

There were surreal times on this trip when I saw images in real life that I've seen my whole life in encyclopedias as a youth (yes, I'm a dinosaur as I had a set in the family,) and later on the internet. The same thing has applied at home like the first time you see the Statue of Liberty or Mount Rushmore. In this case, once again, I would see images I never thought I'd ever see.

Flying into Cairo was quite an experience. I fly so much that I rarely look out the window of an airplane. In this case, I was stretching my neck to get a glimpse into Cairo. "Color me" geographically stupid, but I thought it was considered the "Middle East," and not Africa. Technically, I guess it's considered both--regardless, this would be my first flight into Africa. The immediate impression from the air and later on land is that everything was essentially sand in color. From the air and on the ground, it's obviously a very poor country overall with small "pockets" of wealth. I had Hollywood film flashbacks as it looked (from the air) like many movies I've seen out the side of a helicopter.

Much of the building structures had rebar sticking out of the tops of many structures. I incorrectly observed this as construction projects incomplete or halted. One of the expat locals more aptly described much of this as generations of families who would occupy a main level, then add a level as their children would marry, and each level would have the rebar on the wall edges sticking out to the sky waiting for the cousin or daughter to build and take the next floor. The city reminded me a lot of Delhi with the preponderance of poverty starkly contrasted by palaces or hotels.

Our hotel was on the island of Zamalek which is an affluent area rich in hotels and embassies. I stayed at the Marriott Hotel and Omar Khayyam Casino which was built originally as a palace in 1869. Sounds fancy and certainly parts of the hotel were nice and rich in history, but the room looked almost like any other Marriott and quite frankly the hotel could use an upgrade. Not sure I'd recommend it other than the location  and that it looked out onto the Nile.

The Nile happens to be one of the most polluted rivers in the world. Trust me, the Nile looks at its best at night, but there would be no way in hell, you'd catch me doing the Cairo triathlon in this body of water. I mentioned Zamalek is an island--it essentially sits in the middle of the Nile bordered by three bridges.

Work consumed much of the entire trip, but we were able to have Friday as a tourist day which is also a non-working day for businesses in Egypt--they work Sunday through Thursday. We had locals we met with or had flown in that were very helpful setting up our "free day" on Friday including having a local driver shuttle us around. On Zamalek, it's very "Western" and we pretty much stuck to that area at night for dining.

Biggest thing I didn't expect in Cairo? Hookah's everywhere; in our hotel at dinner tables, in nice restaurants, husbands, wives, businessman. It's hookah-mania. Not really my thing.

On our tourist day, we head to the pyramids with our driver. He explained two options; walking in (and getting harassed by the vendors,) or go in by horse. Screw that, I'm saying, I'm going in by camel. The pyramids overlook the city and not really that far of a drive out of town--maybe 30 minutes. As we pulled close to the city area surrounding the pyramids, the rubbish was a bit overwhelming. Trash was piled into a small canal along with dead animals. After eating a banana on my camel, it felt odd, but I tossed it aside like everything else.

Our tour guide was quite entertaining, and while it sounds cliche, when he learned I was from Colorado, USA, he replied "howdy!" Too funny. He lead myself and a co-worker to the pyramids; me on camel and my compadre on horse. At the time, some of the poses seemed ridiculous, but they turned out priceless. Two interesting observations of the pyramids; yes, they were as big as I'd expected, but the red granite facade has been stripped away and put in other museum(s.) The second observation is that the Sphinx is quite a bit smaller than you'd expect. There was little to no security, and sadly a lot of discarded water bottles and trash in the area.

On our last night in town, we walked to the southern tip of the island for dinner and walked by several embassies. While I should have felt safe, I walked by the Iraq embassy and saw armed guards behind a small metal barricade. That felt strange knowing that our nations aren't exactly friends. Like a dumb ass tourist I took a picture of one of the embassy buildings and guards from a half a block away started yelling at me. "I'm sorry!," I muttered as I briskly walked away. Not a good thing to have men with guns not happy with you. 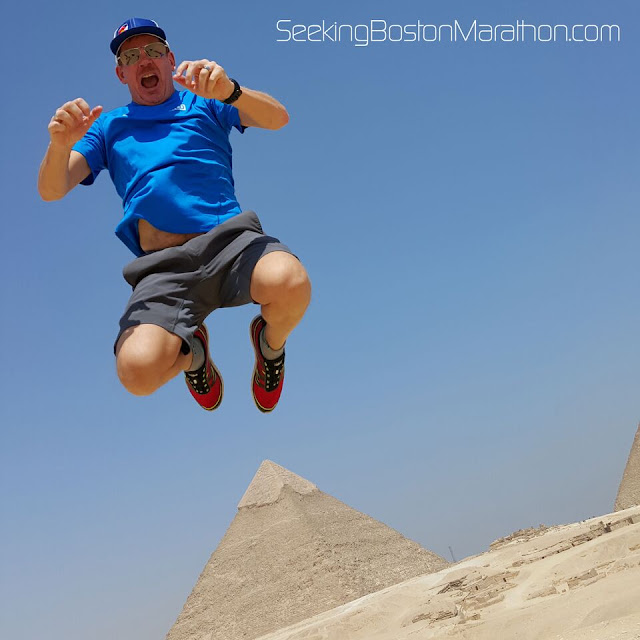 The business contacts I made were certainly cordial, but I didn't exactly feel welcome or perhaps out of place in the city and was ready to head on to my next destination.

As a fan of pubs and Guinness, I was looking forward to this final leg of my trip, but it started with a rather inauspicious start. I'm pretty sure it wasn't the food in Moscow, but something I picked up in Cairo, I spent the first two days in the nicest hotel (Conrad Dublin) of my trip in bed. On the second leg of my flight from Cairo to Frankfurt to Dublin, I was not feeling right. I won't go into details, but full on fever and chills set in and it was one of the nastiest bugs I've had. Having been to Delhi and survived, I stuck to bottled water in Cairo, but fear I may have got lazy by using tap water to brush my teeth.

I was able to salvage the trip, by getting a couple runs in including one along the Grand Canal not far from my hotel. I was also able to get in some tourist site-seeing catching St. Patrick's Cathedral, St. Stephens Green Park, and Christ Church Cathedral.

Not wanting to leave the land and birthplace of one of my favorite beers, I ventured off with my colleague on our last night to the famous Temple Bar in the "Temple Bar district" right near the river Liffey.

While my time here was short given my sick days, I found the people to be quite friendly which was a pleasant reprise from the contrasted reception I got in Cairo. Perhaps it had something to do with all the red heads on red bikes that made me feel right at home; then again, on a bar stool sipping a Guinness is pretty comfortable territory for me as well.