I was sitting at the DMV this afternoon with my son.  Apparently, I was not the only one with the bright idea of getting his son or daughter their license this day as the line was an hour long.  The unseasonably warm sun was out.  A man with a leather face with a hue of alcohol purple was a few feet away sucking on one of his last three cigarettes.  I know he had three as the young woman who tried to "bum one" off him was rebuffed..."I only have a few left," he replied. 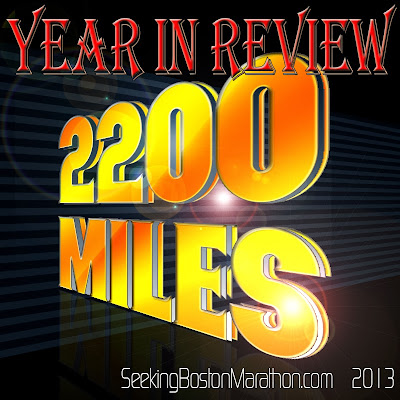 The Kool-Aid dyed hair twins (one purple and the other fuschia) were puffing on their "cool" cigarettes to my left adorned in their tight leather.  Apparently, sporting cleavage is something that's required to go to the DMV (Department of Motor Vehicles.)  With all that time on our hands, and after periods of quiet, my son asked, "Dad, what are your goals for 2014?" I thought for a moment and part of my response obviously touched on what athletic goals I had for 2014.  It seemed like an odd juxtaposition being surrounded by people more intent on killing themselves with nicotine versus setting their race goals for 2014.  I told Jesse that I had goals around work, being more calm and balanced as a parent, and that I had unfinished business in my run and triathlon world.

It's hard to look ahead without looking back.  With that, the 2013 Seeking Boston Marathon "Year in Review."  Outside the world of running, Walter White's run as "Heisenberg" came to an end.  I'm still trying to process the twerking Miley Cyrus, and Paula Dean and the Duck Dynasty dude came out as racists.  None of this came as much of a surprise, but I had a few nice surprises of my own this year.

It's all about Boston

My blog is all about drinking from the chalice of the Boston Marathon.  I had a wide range of emotions as many did having run the marathon this year.  Leading up to the marathon, I had a 30 day photo challenge with three other bloggers which lead to even greater anticipation of running the race.  I started Marathon week by interviewing Josh Cox.  It was one of the finest perks I've enjoyed as a blogger and got some great shots on Boylston during the interview and morning run with Josh.

The race itself was the best marathon I'd ever run without ever hitting the wall and actually having energy at mile 20.  It wasn't a PR day, but it was a personal course record for me.  My race write-up is HERE.  I didn't know it at the time, but my BQ that day wound up serving as the time that would get me into the 2014 race.  Yes, I will be there!

I try my best to sometimes show the lighter side of running.  Sometimes I make myself laugh, and hopefully get some of the SBM readers to share a smile once in awhile.  A couple of my favorites include my spoof on the ATT "It's Not Complicated Commercial," "More is Better."


The award for Best Blog Post that no one read was my Star Wars Run Quotes.  Must have posted on the wrong day, there aren't as many runners who can quote Star Wars as I thought, or some just don't see the humor in Yoda having bleeding nipples.  I entertained myself, and came up with what I thought were my best illustrations of the year.  (Star Wars post HERE.) 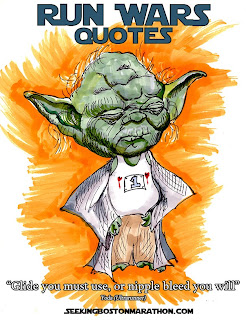 I sunk to a new low this month in my "Twelve Days of Christmas" by adding puppetry and singing to my blog resume.  My sons were "creeped out" by "Larry the foul-mouthed unicorn's" low voice--I was in the middle of a cold during production.  The best part of the video is Larry doing the MGM lion's roar so you only have to watch the first seven seconds to catch the best part.

It was a great work year which allowed me to run in some fantastic parts of the world.  Nevertheless, it presented some challenges as well to maintain marathon training while dealing with time change and jet lag.  Hard to pick a favorite, but running in Paris and London were probably at the top of my list. 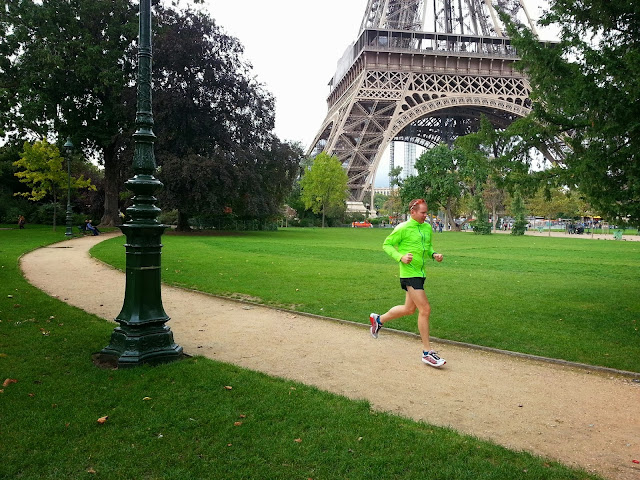 This year I started working with a new coach, Benita Willis and the "Working Class Athletics" team out of Boulder.  As the name suggests, this is a "roll up the sleeves" mentality of runners intent on pushing their own personal limits.  Aside from the fact that I ran over 2200 miles this year (a new high,) I hit the podium in every run race and triathlon I competed in this year aside from the two major marathons.  The year also included a PR in the half marathon at the Slacker Half and a surprise 5K PR in November at the Highlands Ranch Turkey Day 5K.

So this takes me back to the conversation with my son sitting on the concrete wall in front of the DMV.  My goals this year included; qualify for New York, break 3:20 in a marathon, and improve my triathlon game.  Without having a triathlon coach, I can say I did that I accomplished this by coming in first in my age group in one race and four seconds behind first in my other.  I plan to compete again this summer sticking with Sprint distances.  My work schedule will likely include quite a bit of travel again which would make training for Ironman not happening in the 2014 plan.

On the New York Qualifying front, I came up 18 seconds short at the Slacker Half, but broke 1:30 for the first time in my race career.  I will try and shave those 18 seconds off at either Georgetown to Idaho Springs Half or again at Slacker.

As far as breaking 3:20, if projections of a half marathon time (of 1:29) are any indication, I should be able to break the time and mental barrier of 3:20 this year.  Not for a lack of trying.

Thanks for everyone that occasionally reads my running rants.  I will be back and writing about it starting tomorrow here, on Facebook, and Twitter.  What are your goals for 2014?  Would love to see them posted.  Putting it in writing puts it one step closer to happening.
Email Post
Labels: 2014 goals boston marathon qualifying for boston marathon