Shrek: [observing a giant building] "That must be Lord Farquaad's castle... Do you think he's maybe compensating for something?"

This week the Wall Street Journal, published a column by Mr. Chad Stafko (aka little Lord Farquaad) entitled, "OK, You're a Runner. Get Over It."  Why all the hate...are you too compensating for something? I'm giving Farquaad the benefit of the doubt that this was written in a satirical tone meant to fill his inbox with runner hate mail.  It worked if that was your goal.  Farquaad rants about how the benign oval 13.1 and 26.2 marathon car stickers irritate him.

"What's with this infatuation with running and the near-mandatory ritual of preening about it,?" Farquaad writes.  Wall Street Journal?  I would expect this kind of anger-invoking article to grace the pages of the free urban newspaper at the coffee shop next to the ads for medical marijuana and the "Warm Springs" massage parlor. 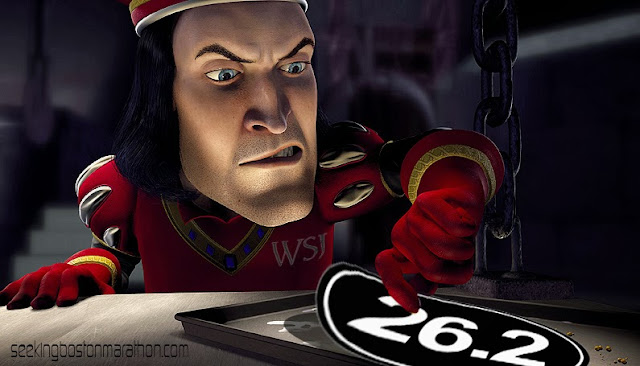 I won't stoop to your level Farquaad, but (I will and) I'll assume you've got some inside aggression that spews out through your fingers onto the keyboard for some kind of displaced anger.  Did you read this babble before you hit the "submit" button to your editor?  Since you made some assumptions about all of us, perhaps we can make some assumptions about you Lord Farquaad; too lazy to get your fat ass off the couch and out on the road yourself, couldn't get a date to the prom, short man (or manhood) complex, or kicked off the cross country team in high school?  My guess is you couldn't qualify for the "all abilities accepted" X-country team.  Do you have the "My kid beat up your honor roll student" bumper sticker on your car too?  Only assholes adorn their minivans with those.  As ridiculous as this sounds, so are your points.

Lord Farquaad writes, "I have a theory. There is no more visible form of strenuous exercise than running. When runners are dashing down a street in the middle of town or through a subdivision, they know that every driver, every pedestrian, every leaf-raker and every person idly staring out a window can see them,"  What the f**k?  I can tell you the last thing I think about when I go out for a 5 AM run is, I hope some stranger driving by on their way to work sees me and thinks, "wow, that guy is really something special...look at those calves!"

Despite your theory, I originally took up running to cope with a divorce and get into shape.  Running helps balance my life and has got me through some very dark moments in my life.  I know plenty of other great stories of runners who overcame horrible accidents, raise money for worthwhile causes, or are fighting off cancer and running is their solace. Way to piss on someone's hopes and dreams Farquaad.

Am I proud of my accomplishments as a runner?  Absolutely, and I don't think there is a damn thing wrong with it.  Do you know it takes approximately 500-600 miles of training to run in a marathon?  Those aren't Little Lord's miles back and forth to the 7-Eleven in your minivan to pick up this month's issue of Tiger Beat magazine (#BieberLover.)

I think a runner deserves the right to put a frickin' bumper sticker on their car if they finish it.  It's quite an accomplishment.  You claim that "Many of my friends (debatable) who regularly run have done so for years, decades before there was a thing called social media to put humanity's self-absorption in overdrive."  Wow! Really?  I'm guessing if they are real runners, they may not be friends with little Lord Farquaad for long after reading this sewage.

One of your ex-friends ran Boston.  I qualified for Boston and yes, I am proud of it.  I occasionally wear my Boston Marathon jacket(s.)   Am I proud of those races and jackets?  Yes.  Am I a self-absorbed asshole as you insinuate?...in your eyes perhaps, but not in the eyes of my children who are proud that their dad who has arthritis and was able to qualify and race Boston three times.  They are proud of their dad just as I am proud of them...I suppose you have an issue with that too...parents proud of their kids?