This has been a tough blog to write. I was somewhat worn out (overtrained?) prior to Boston and the course took it’s toll on me as I’m still feeling the effects of the notorious Boston Marathon course three days later. There’s much to talk about, the city, prior to the race, the race and course itself and feelings once I hit the finisher’s area on Boylston Avenue in downtown Boston. 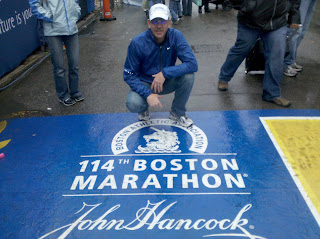 that raising money for a worthy cause made this one extra special. I raised over $4,500 for the Leukemia and Lymphoma Society as part of Team in Training (TNT.) On race day, I wore the name Kyra Meyer on my purple TNT singlet. I got to know her story by getting re-acquainted with her Dad, Tim Meyer through my fund-raising campaign. Kyra unfortunately lost her battle to Leukemia last year at the young age of 16. The “icing on the cake” for my Boston race came after the finish line when I was approached in the runner’s finish area by a man who identified my purple “Team in Training” singlet. He told me that he is in remission with his Leukemia and had just completed the race. He thanked me for running and raising money for this charity and said the drug/treatment he was taking was made possible by the Leukemia and Lymphoma Society. WOW! My only regret is not getting his name or getting the marathon foto team to take a picture with this guy. I wasn’t exactly thinking straight at that point and a bit wobbly. Way cool!

Like other “point to point” races, there’s the usual bus ride that gets you to the starting point. In this case, the starting point is the High School in Hopkinton, MA. My sleep the night before was what you might expect; not the best in the world. Fortunately the more important night of sleep was the “night before the night before” which was solid. Similar to the bus ride in Sacramento, you’re thinking to yourself, “if this is a long bus ride, how am I going to run back?” The BAA has been doing this thing for 114 years so they have this “down to a science.” Once arriving in Hopkinton, you’re ushered off to a grass field where you try and chill (literally) until race time. Huge tents, grass fields, vendors, the PA announcer, and baseball infield characterize the setting as you mentally prepare for the biggest r 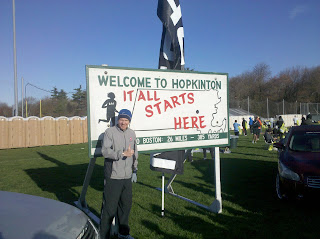 ace of your life. Boston had a couple of days of “off and on” rain so the field was quite damp and my space blanket came in handy. Others at camp Hopkinton brought inflatable mattresses and some cocooned up in blankets to chill out for rest prior to the corrals being called out which is over a ½ mile away. The first aid tent came in handy as the one thing I forgot was lubing up the nipples. Cold weather and no lube is a bad combo. Fortunately, I applied an ample supply on the feet earlier that morning before putting the Smart Wool socks on. I hung with a couple running buddies and took my customary “photo opp” shot in front of the It all starts here sign on the Hopkinton grass fields.

The corrals were well managed and I settled into corral #9 which was actually a tad downhill from the start line. It would be an eventual 5ish minute walk before getting to the actual start line after the corral #1 would take off. The setting around the start line gives you a sense of the small town charm and history of the historical race. Once the F15 flyover and National Anthem were taken care of, the extra clothes started flying off the runners and gathered by the ample number of volunteers that covered the entire event.

The first six downhill miles of the course went as expected as the sound bites of “don’t start out too fast” played over and over in my head and I continually had to tell myself to slow down. Apparently I didn’t listen very well as I set PR at the half marathon point. The only problem is that Boston is a marathon, not a ½ marathon and the infamous Newton Hills were yet to come.

I’d have to say, I’d heard it before and it lived up to the billing, the best fan support of any marathon I’ve run. Could be tradition, could be that they get the day off from work (one of the few cities in the country that recognize Patriot’s day,) the annual morning Red Sox game, or the evening beverages being consumed in the early morning. Let’s just say there were quite a few small cups extended by fans along the way that held suspect liquids. Fans young and old lined up pretty much the entire course; bikers, children, cheerleaders, charity support and of course college students.

I caught a crowd of Boston College students somewhere after Heartbreak Hill that gave me quite a boost with the gradual five into downtown Boston, but nothing rivals the infamous Wellesley college gauntlet around the halfway point of the race. You normally hear the screaming women of Wellesley a mile away, but with the tailwinds (or was it crosswinds) it literally crept up on me, but quickly realized where I was at once I saw the mania. They were going absolutely nuts and donned many signs asking for a kiss. This must be what it feels like to be a Jonas Brother as you feel like a rock star at times on this course. It’s impossible not to run fast through this stretch.

The other section of course that caught up with me was the infamous “Heartbreak Hill.” I literally had to ask a fellow runner if we had passed the notorious hill. Whether it was the fast downhill start, or late hills, I hit the infamous “wall” during the hills and last 10K of the race (my first 5K was 22:39 and my last was two minutes slower.)

This is definitely one of those courses which I wish I knew better or where experience pays. As we got into downtown, I w 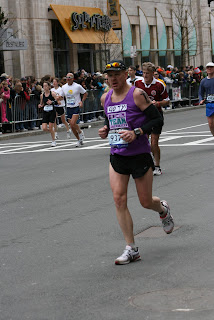 as happy to see Beacon street but it seemed to go on FOREVER. Once I hit the short Hereford, block, I knew I merely had to turn the corner for the final stretch along infamous Boylston Avenue. Again the crowd was absolutely insane and was able to catch my wife and brother in the last block before crossing the finish of my first Boston Marathon.

My Time Goal and Performance

I had three goals going into race day (set a PR, run a 3:15, and re-qualify for Boston.) The good news is that I will be back at Boston in 2011 as I turned in a 3:23:44 time which is six+ minutes faster than the 3:30 time I needed to qualify. For that, I am thankful. The competitive side of me feels disappointed for not turning in a faster time. My running buddy Tim who logged his 19th consecutive Boston tells me that I should feel proud for running a 3:23 on such a tough course. Another buddy, Wayne told me the story of his Boston run last year. The night before he was in the hot tub trying to relax the night before the race and was chatting with a Boston veteran who inquired what his time goal was. Like me, Wayne felt strong and that he could have a very fast time the next day. The wily veteran said, “take your PR and add 10 minutes.” Setting a PR here was probably about as smart as me thinking I'd qualify for Boston in my first ever marathon three years ago. 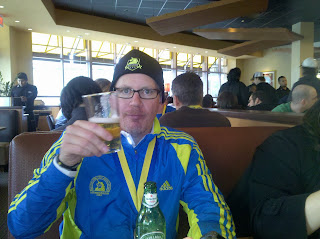 ow myself well enough to know that you have to be careful what you ask for as you can sometimes walk away with a sense of accomplishment, but also walk away feeling a bit empty wondering what do I do now. I definitely enjoyed the reward and finally being able to wear the prestigious Boston Marathon Jacket.

I have already begun to evaluate what I need to do to train better, and get stronger in my next race(s.) Like many runners, I have been pouring over the running web sites to figure out which races I can fit in over the next 12 months preparing for my next Boston Marathon. Like the couple we flew into Boston with, the wife indicated that she first thought her husband was fulfilling a once in a lifetime dream and it turned into a lifestyle. If Forrest (who I saw on the course) describes life is like a box of chocolates, then Boston is like potato chips—you can’t have just one.
Email Post
Labels: boston marathon marathon runner marathon training qualifying for the Boston marathon runner running