Runnin' of the Green: Race Review

St. Patrick’s Day has always been a big holiday for me. Born with red hair and fair skin, it was always the holiday where it was cool to have red hair—even if my hair came from Swedish vs. Irish ancestry. Flashback to the third grade when I was riding the bus to a Broncos game with my dad when a sports reveler who was already “half in the bag” asked who else in my family had red hair to which I replied, “my dog Nick.” At the time I didn’t realize why that was so funny.

Anyway…I’m always into St. Pat’s so the downtown Denver Runnin’ of the Green 7K "Irish Marathon" (ROTG) sounded like a fun race to take in. Known as the country’s largest St. Patrick’s Day race, the ROTG is held in the bar and restaurant rich LODO area of Denver.

My marathon training plan (from Runner’s Edge of the Rockies) had this last week as a “recovery week.” Typically each Saturday hosts a long ru 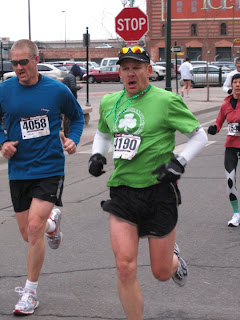 n that gets increasingly longer as the program advances towards race day alternating with a “down week” or recovery week where the mileage is lower including the Saturday long run.

With the target mecca race (the 114th running of the Boston Marathon) a mere five weeks away, the timing was perfect to have a tune-up race.

Since I decided late in the process to sign up, online registration was closed (via Active.Com) so I had two options (Race Day sign-up) or at Runner’s Roost on Saturday. I was smart enough to pick the later. Runner’s Roost on Colorado Blvd. in Denver was bustling on Saturday with the atmosphere of an expo. Saucony had pitched a tent outside and was peddling their wares including a couple of green shoes. Inside, it was crowded with people loading up on running gear and registering but no lines existed at the electronic kiosks. The kiosk was quite cool with one swipe of the Driver’s License and a couple buttons, I was handed my bib number and chip and was ready to go. I couldn’t resist a shamrock racing shirt as I almost made it out the door without spending more cash.

The weather forecast played mind games with me the night before as they predicted cold temps with rain/snow and wind. If the course only threw in hills, it would have had the trifeca of the runner’s nemesis; weather, wind and hills. Lately, I’ve had the habit of laying out what I think I need to wear and throwing additional weather variables into a laundry basket and making a “game time decision” on what to wear. With a late start (10:15AM) I arrived plenty early and was able to get a parking meter ½ mile from the start/finish area. I took a jog to the running area as part of my warm-up and to get a feel for the weather and clothing. I settled for short sleeve shirt with ASIC arm warmers, heavy gloves, and racing cap which was just right for the short quick race.

One of the right calls I made was registering the day before as the line for race day registration was several hundred deep—the announcer later labeled the race as sold out and sent some of the disappointed runners straight to the beer line. Bummer for those hoping to race.

The warm-up run was good as it warmed me up and got the racing juices flowing. Coach Dave finished the warm-up with some “butt kickers,” strides and jog back to our home base tent. After grabbing a couple strands of green beads from the Runner’s Roost, I was ready to go.

One of only two mistakes in the race was getting to the starting line too late. Being a social oriented race, there were people who weren’t taking the race seriously (did I mention the guy armed with Guinness?) The problem was that I was several hundred people deep behind what my pace group should have been—a 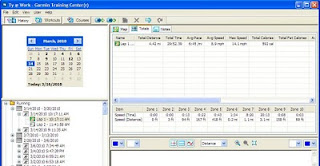 s a result, there were casual runners, drunks, baby strollers, and SLOOOW runners bogging the front of the race.

With the congestion, I felt like a Toyota Prius without brakes dodging several hundred people as I took at the sound of the start. My goal based on the recent runs and speed work I’ve done was to average a sub seven minute mile pace—this meant dodging a lot of people and several times, I had to put on the brakes and bob and weave between the runners to try and start out at this pace.

I liked the course layout as it started and finished within the same city block along Wazee street in the LODO section of Denver. My running group, Runner’s Edge of the Rockies had approximately 60 runners out for the race and it was good to see them before, after and throughout points of the course providing each other encouragement. 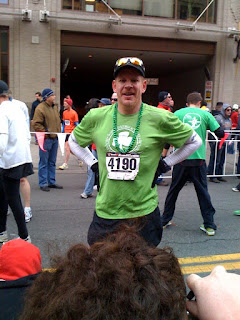 Only other mistake in the race was that instead of using the plastic zip ties to attach the small credit card sized timing chip to my shoe, I thread my laces through the holes…as a result, I had to stop and tie my shoe at one point in the race—a first for me.

The good news is that I hit my goal and broke the seven minute mile pace in the 7K, but even better was that my conditioning felt great and didn’t feel I was huffing and puffing like I have in some of my shorter 5K races in the past. With over 3,800 entrants, I placed 15th in my division—I really need to target smaller races to have any hopes of ever hitting a podium. The best part was the ample supply of Killians Red Ale awaiting the runners at the end of the race—ahhh…”baby’s milk!”