I was a Teenage Werewolf

The blog below generated quite a range in responses—largely supporting the athletic body type of a male marathon runner, but most of the comments were around men 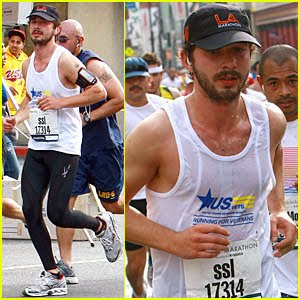 wearing tights in a marathon. The most extreme was from one of my DailyMile followers who proclaimed that “Nothing, nothing, nothing is worth shaving down or wearing girls tights though, coz I'm a MAAAAN.” Ouch—did I hit a nerve there?

My crack marketing department (my wife) slipped me a photo from last Sunday’s LA Marathon of a man’s man; Shia LaBeouf wearing (you guessed it) running tights. This is the heir apparent to Indiana Jones, Megan Fox’s cling to hero in the Transformer series among other films. On top of that, the dude ran to benefit US Veterans—tell me this guy is not a man! I felt confident before, but now I’m in good company wearing my running pants…or tights, or whatever you want to call them.

ORIGINAL BLOG: I WAS A TEENAGE WEREWOLF

Okay…so I’m not a teenager and I'm not a werewolf, but I couldn’t find a movie titled, "I was an Adult Manorexic." If you look closely teen wolf was a track star, and perhaps I'm feeling a bit misunderstood like the teen wolf.

Of all the sports I could have picked and got addicted to, I happened to chose running. As you get closer to a marathon race or deeper into the typically 16 week training program, the pounds tend to peel off the body. Running into a good friend this last month in , he told me I looked “manorexic.” Another friend accu 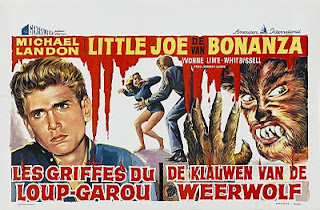 sed me of being a “bean pole.” Ouch...that didn’t sound flattering. Here is where I insert the disclaimer that while my blog stories are typically “light” I am not trying to offend anyone with an eating disorder, nor do I have an eating disorder.

My usual retort is to ask “have you ever seen the first few people crossing the finish line in a marathon?...they aren’t exactly beefy.”

I guess the point is, that for men, running is not always very sexy or masculine by certain narrow-minded perspectives.

This has been my most ambitious training program yet; hill training, speed work, tempo runs and five long runs of 20+ miles (I think my first marathon training program had one 20 miler.) As a result, my jeans are a bit looser after 14 weeks and nearly 400 training miles, but I can crack a walnut with my glute muscles and my hammies are tighter than a thoroughbred horse’s hind quarters. I got that going for me, but manorexic?

Peeling the pounds off isn’t necessarily a bad thing depending on where you start. I think back to the birth of my first child in 1995, I was going “scoop for scoop” with the pregnant Dairy Queen runs. Christmas pictures that year revealed double chins and 20 pounds more than I carry today. I thought to myself, “you have become Chris Farley.” I modified my eating and got back to a more natural weight, but it wasn’t until my Forrest Gump moment in ’99 that I starting to run, and run, and run…

With six weeks and roughly 200 miles yet to go, likely my final running weight hasn’t been established. The sound bite of “five pounds equals five minutes” also plays in the back of my head. It’s not like I’m starving myself—when you train for marathons, you eat a LOT.

Why is it that women runners look great and male runners are manorexic? Some kind of funky reverse double stan 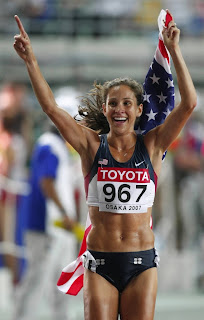 The other dividing issue with men and running is tights. Due to a variety of leg issues, I tried and subsequently got hooked on Skins running tights. They sell two flavors, recovery and training/recovery. I run in the later. My niece calls them panty hose and can’t avoid laughing at me. My kids shutter if I come home from a long run and god forbid I walk into the house wearing tights with their friends around. “They’re not tights and they’re not pantyhose!” Can’t we come up with another name?…when I think of tights, I’m thinking ballet—“not that there’s anything wrong with that.” “Leggings” sound even worse. I’ll go with running pants.

Last Saturday called for a 24 mile run and cool weather which means nipple lube and running pants. During a run, humility goes out the door as you’re not worried about how you look. Male runner’s especially have a number of gross habits…your nose runs, there’s no Kleenex box, figure it out—not very pretty. There’s even urban legend stories of even more extreme body fluid emergencies over a race—do yourself a favor and don’t Google that one.

The 24 miler was by far my best run of the 14 week training session—great pace, good energy, few aches, and right at the time I wanted to finish in (intentionally running 40 seconds to a minute slower than race day pace.)

The reward that afternoon was a pedicure to tend to my aching feet and 1,000 miles of calluses’ built up since last July. Real men don’t get pedicures? With age comes wisdom...foot massage, hot stones on the calves, and paraffin wax soaking your feet—sign me up!

Very nice post! Love it!
Keep up the running. Manorexic is way better than the double-chin syndrome!
Take it from a female!

People keep telling me my husband has gotten too thin. We just ignore it. I get to see him naked and he looks just fine to me. And he is loving the speed he has gained by losing the weight.

Nice post. I don't yet share your problem, having been at least 20 lbs overweight when I started running last fall. I've shed much of the excess, and still have a few flabby spots I'd love to see go before I wonder if I've lost too much. It is an interesting question from an evolutionary perspective. In Born To Run McDougall talk's about how to look at them the Neanderthal should TOTALLY have outlived early humans. The Neanderthal were big, strong, muscled dudes who could take down wooly mammoth. Our ancestors were this skinny dudes running for miles on the open plains to score a scrawny antelope. So how does that translate now into men who are more heavily muscled (within reason, anyway. I find those Mr. Universe guys about as attractive as a car wreck. And equally impossible not to look at, but not in a good way) appearing more attractive? There are exceptions to this, too, though. Look at that Twilight guy. He ain't exactly Schwarzenegger.

The fact is, if you're skinny because you are running a lot, and not because you are undernourished, chances are you are very healthy, and in the end I think that's more important than what people think you look like.

Though it is cool when people think you're hot. :)