This post is not about the big "C", but the little "c". The last 15 months my running and triathlon campaign has seen more curves than Christina Hendricks, but curves are not the "c" I'm talking about.

I think this must be some kind of test...to see how much resolve I really have. Today I go in for surgery for skin cancer. Shit. Those are some tough words to write. Before you panic, write me off, or hold a vigil, it's not what I consider the "big C," yet something I have to take care of. I like to think of it as the "little c."

In some form of sick joke or test to see just how much I can handle, I received the biopsy results less than 24 hours before I received the results of my MRI on my left foot which revealed a stress fracture and once again put my New York City marathon run dreams on hold. Dream?...more like a nightmare. This news was seven days before I was to have run my first New York. I know...I know...a race seems insignificant compared to ones health, but the timing of of it overwhelmed me to say the least. For the second time in fifteen months, I was dealing with issues of my mortality. 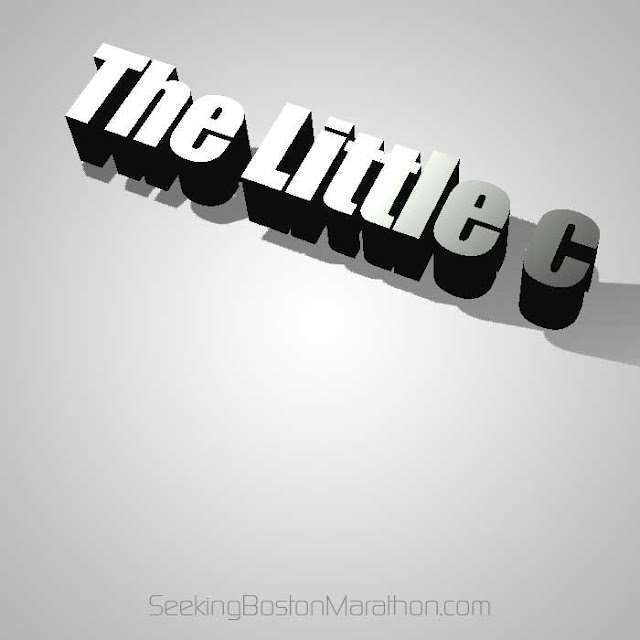 Back to the big vs. little "c" thing that has you confused at this point. I first discovered this whole thing when I had a blemish on my nose that didn't seem to heal normally. The area would dry up, start to "flake off," then it would seem to be an open wound again. The good news is that this hasn't gone on for long, and I knew something was not right. If you were to look at my nose in normal conversation, you wouldn't even notice it; yet there were a couple race photos and blog selfies this summer that showed a mark that just looked like a zit worked over too hard.

Within a few weeks of discovering this, I made the appointment with the dermatologist. He had to order a "punch" biopsy kit to extract the sample. It's kind of hard to explain, but I suppose it's like drilling a earth or ice core sample. Considering the area (right in the center of my space,) Dr. Stephen ordered the smallest punch kit available. This would only require one stitch for the biopsy itself not leaving a "trace" of the test itself. The small punch as it turned out did not matter as they're going in to remove a much larger area today...estimated to be the end of a pencil eraser.

The big C and the little c? The worst possible scenario is that it would turn out to be a melanoma. This can have a tumor below the surface and can spread to the lymph nodes and rest of the body. Just like any other cancer, catch it early, and your odds are much better. The other form of skin cancer is basal cell carcinoma. Sounds scary but it's more treatable than a melanoma. I have the later...the "little c." Hopefully, catching it as early as I did with the procedure (Mohs) I'm having done, my chances of full recovery and success are high.

I took awhile to let my kids, parents, and siblings know about this. I cried...it really freaked me out. How would I tell my kids I have cancer without freaking them out? How much was "below the surface" and would I be disfigured? Will they catch it all? All these thoughts have run through my head.

I debated writing about it as this is as personal as it gets. I was very private about it. There were many aspects I had to rationalize including when to do the procedure. The doctors said it wasn't "life threatening" yet they didn't want me to delay. I'd originally scheduled to go in the week of Thanksgiving; then a wait list opening became available for November 17th. "Let's get it over with," I thought.

Being the pragmatic one, I also figured, this would work with my work and work travel schedule the best. During the consult with the surgeon, I realized that the recovery is a bit more than I thought. He really doesn't want me doing anything for two weeks. The procedure itself does not take long, yet I will be there for five hours or more as they will run tests on the tissue extracted to make sure they "got it all." After the bad cells are removed, they will either stitch me up with a flap from skin in the surrounding area, or more likely a graft from inside my ear.

As I said, I took awhile to tell more of my immediate family. I didn't want my parents to worry more than they had to for longer than they had to. Two of my kids are approaching finals in college and I didn't want that to disrupt their lives. My youngest knew something was wrong as my face (no pun intended) couldn't hide my stress and pain.

So why would I write about it? I'd say the primary reasons are therapy and education. Therapy in that "holding things in" can only make matters worse. Writing about it helps. The other reason is to educate. when something like this happens, you wonder how it happened, and "how did I get it?" I'm a fair-skinned ginger, yet I did "tan" at times growing up. I remember when I just started skiing as a grade-schooler in Colorado and made the mistake of not putting on sunscreen in the mountains and severely burning to the point of blistering. Yes...when you're in the mountains on the reflective white snow, you WILL burn quicker than normal.

In college, I went on a few spring breaks and would lay out at the beach. While those were great times, the sun caught up with me. If that didn't do it, owning a tanning salon 15 years ago also probably did not help. On the education front, I have a daughter with the same (even whiter) complexion as me, and reinforced with her that she should lather herself with SPF50 the rest of her life. She will also be grateful as she ages as her skin will be much younger than those that chose to "tan" themselves.

As I've got older, I've got a bit smarter about sunscreen and always wear a hat when I run outdoors. Clearly, I will be taking even further steps when I get out of my walking boot and get back outdoors to always wear protection. I'm hoping that this will also help the readers of my blog to understand the dangers of the sun and to cover up. I may be "out of pocket" for a couple days, but will post an update hopefully soon. Thanks for listening, reading, and putting on sunscreen next time you go out for a run.