When you think of really fast runners, you use words like "gazelle," and "cheetah."  Super fast and graceful animals.  Today I felt like a zebra.  I know what you're thinking.  A zebra looks like a bastardized version of a mule.  And how fast can a mule run anyway?...the answer would be 40 miles per hour according to the American Museum of Natural History.  Proof that the black and white mule is pretty darn quick and proof that I will exhaust all research sources in the name of run blogging.  The zebra is not as fast (or graceful) as the aforementioned gazelle or cheetah.  Gazelles can run up to 60 mph and over distance at 30 mph.  The cheetah is the fastest of the bunch running up to 75 mph, but they are not marathoners which is why the gazelle (albeit slower) can sometimes outrun the cheetah.  What in the Wide World of Sports (or Wild Kingdom) has that got to do with SeekingBostonMarathon for donkey's sake?  #newshoes 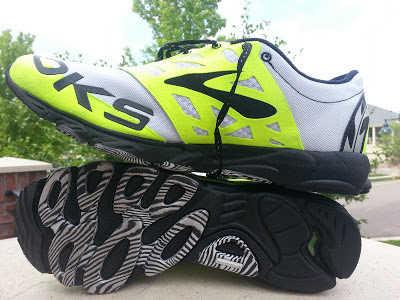 I've been lusting after my new kicks for a few days.  My Brooks T7 Racers arrived by mail before Memorial Day, but I wanted to wait for speed work to break them out.

I've been ogling them for a few days now.

These are not trail shoes...these are not heavy support shoes with lots of posting for pronators.  They're built for speed and are super light at a whopping six ounces. Why the zebra reference?

The bottom of the shoes resemble either a cougar's (the bar version) halter top, or a wicked mean and fast zebra print.  Beyond the bold colors and brazen Brooks name across the front of the shoe, the shoes have an extremely light mesh on the top.  They also sport the "off-set" lacing which provides...I'm not exactly sure what that provides.  I have to ask Brooks on that one.  It  feels quite comfortable when laced up and doesn't constrain the top of the foot.  I have never worn ballet shoes (REALLY...I haven't!,) but I suspect this is what ballet slippers feel like which are certainly lighter than my "man cave" slippers.

The "true test" of the zebras was my first speed workout in them today.  My run coach prescribed a 15 minute warm-up run followed by a two mile tempo at near half marathon pace.  After the tempo run and a brief two minute rest, I ran 15 second strides over seven minutes; first 15 seconds at 5K pace, then a cooldown stride, and then repeat for seven minutes.  After another quick 90 second rest, I ran another tempo run faster than the first.  This one started at sub-seven minutes and sped up to a 6:31 pace.  Another quick breather, then I finished with a ten minute cooldown.  This was perhaps one of the best speed Tuesdays I've had in awhile--certainly the best I've had since the Boston Marathon last month.

I don't know if it was the shoes, my coach, or my coaches plan, but I'm feeling faster.  At least today I did.

I have slowly migrated from "meatier" shoes such as the ASICS 2160/2170's to largely training and racing in much lighter shoes.  I ran Boston in the Brooks Racer ST5's.  The ST5 has been my "go to" shoe lately.  My current training focus is training for the Slacker Half Marathon in June.  It's a wicked fast downhill course, and I wanted to test out a faster race day (and speed day training) shoe.

After today, it would be an understatement to say I'm kinda digging the zebras.  I've never viewed myself as a "graceful" runner.  I'm not a gazelle or cheetah.  I've got occasional back and hip issues so I run more like Quasimodo when he's  told to "go ring the bell."  While the zebra may not win the Wild Animal Kingdom beauty pagent, it's pretty darn fast and pretty darn tough.  You don't want to take a donkey kick from the black and white mule!
Email Post
Labels: boston marathon brooks T7 racer slacker half marathon