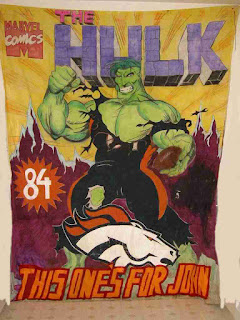 A non running post, but appropriate on Orange Thursday.

Growing up in Denver, the Broncos were an integral part of the Godwin family.  I started going to games in the third grade and still have chunks of the old Mile High South Stands in my garage...one of many things I pack rat away that I'm sure perplexes my wife.  Today is a "circle the calendar" day with the the Broncos playing their old AFL rival, the Oakland (moved to L.A., then back to Oakland) Raiders.  My fondest Broncos vs. Raiders moments;

As an adult, I had clients that we took to a Monday night game at the Oakland Coliseum.  We had a limo stocked with beers that delivered us to "Armageddon" prior to the game.  Given that it was a Monday night game, the stakes were higher and the fans had an extra five hours of drinking in the parking lot.  The best way I can describe a Raiders game is the guards playing the prisoners and the rest of the prisoners are in the stands.  We "fake cheered" for the Raiders fearing for our safety and around the third quarter, the guy in front of us turned around and said, "you're not Raiders fans, are you?"  #gulp

Rod Smith caught the winning touchdown late in the game and we quietly moved our way to the meeting point for our driver.  Only problem was that he took off for another fare and left us to watch how Raiders fans react to a loss.   There were bloody fights, bonfires, and helicopters hovering the broken glass sprinkled asphalt parking lot.  We finally got out of there a couple hours after the game grateful to have survived the experience.  The driver got an "earful" and a crappy tip.

The ("Snake") Kenny Stabler lead Raiders always seemed to have our number and our cousins in the Bay Area (Pleasanton) would always rub it in as kids.  When the Broncos finally notched a win, we sent a "crying towel" to our cousins in Pleasanton that was literally an old sheet.  We
wrote all kinds of "in your face" comments about how we dominated them.  This set off years of back-and-forth taunting.

After Al Davis pushed Mike Shanahan out of Denver after his brief stint as head coach, big Al in all his Elvis white polyester suit glory showed up for a match-up in Denver.  After hanging the Shannon Sharpe Hulk banner in the South Stands, we stood over the rusty pipe railing that overlooked the locker room door that spilled out onto the field.  This was probably two hours before the game and the field was quiet and the stands were just beginning to fill.  Al walked onto the field and I yelled out, "Hey Al, great move getting rid of Shanahan!"  Al heard me, turned slightly and gave me a scowl.  I think he wanted Ted Hendricks to clothesline me.

If you watched Raiders games over the decades you will recognize the iconic Raiders image of Run Run Jones.  George showed up in 1963 as the Silver and Black's equipment manager and I remember him as the guy who always had an ample supply of white towels and regardless of the weather he always wore sweatpant shorts.  Another company I worked for in the Bay Area had box seats at the coliseum which provided a tranquil haven overlooking the mayhem in the stands.  It must have been 1999 when we witnessed Elways Broncos beat the Raiders and again with one of my customers (Joe,) we headed to the Alameda Hilton hotel (long time hotel for the players) for post game beverages.  We got to chat with Run Run and even posed for a couple pictures with his Super Bowl rings.  Another year I saw a young new head coach named John Gruden dining in the hotel bar right after he was hired away from Philadelphia.  Another not so smart move by Al Davis.

Next Generation of Raider Haters 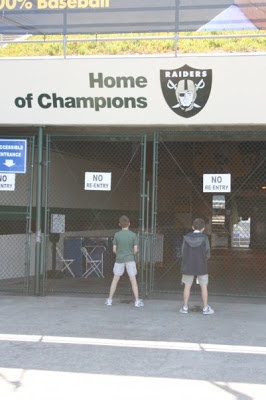 Having Broncos orange run through my veins, I have done a good job as a parent to teach my kids between right and wrong and to hate the Raiders.  A few years ago on a family vacation, I took my kids to visit Raiders stadium in the "off season" during the day with noone around but a single security guard.  I posed (again) as a Raiders fan and told him that I wanted to show my kids the stadium since they'd never been there before.  The classic moment is captured (on the left) as my boys made their mark on Raider nation.

Tonight, I am once again in the Bay Area, but work once again invades my personal life so I will have to settle for finding a dinner location with the game on in the bar so I can sneak away for highlights of what will hopefully be another drubbing of the pirates.  I must have trained my kids well as I got this text from one of my boys anticipating tonight's game;

"What does a Raiders fan do when they win?  They turn off the Xbox."