A Bite of the Big Apple

Funny how running can bring people together. My best friend (Jim) from high school and I have reconnected in part through running (in fact, he flew in for my Portland Marathon--thanks Jim.) One of my other good friends, Richard is working through adult diabetes and wrestled with his weight and smoking over the years. He took on an 8K this last weekend. Way to go Richard! Which brings me to my first ever guest blog.
Russ lived across the street from me in grade school. His parents actually gave me my first job out of college. Through Facebook, our Moms keep up on our lives. I started to become aware that Russ had become a race addict like myself.  He is similar to me as a runner in terms of goals and ironically race times.  He's further ahead than me on his triathlon game having punched his Ironman card.  His Mom (Sarah) sent me his recap of his New York City Half Marathon. A story too good not to share.

Russ' NYC Half Marathon Recap
Have been building my Tri training regime quite a bit over the last 8 weeks or so, going from averaging 10/12 hrs a week to more like 15-17. As a result I have not been feeling good or strong or fast (duh) particularly in my running- and so was not expecting to run this race particularly well. In fact, I had pretty much written off this opportunity to qualify for the (NYC) Marathon, choosing instead to focus on another 1/2 marathon next month on Rutgers' campus. But my coach was kind enough to schedule a taper this week (cutting the workout timing back to roughly 10 hrs) and my body responded. 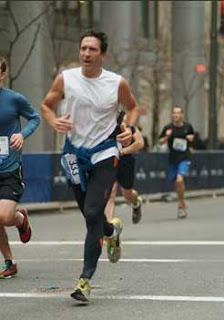 Ultimately, going to the race this morning I was feeling better, lighter, stronger, faster than I have felt recently but still very unsure if I would be able to push to the pace needed to qualify. I needed to finish (13.1 miles) in sub 1:30, meaning my pace would need to average sub 6:50's/m - a pace I have not been able to maintain, even for 1 mile or 2, for the last 2 months. By comparison I ran a Marathon last November that was good enough to qualify for Boston at 7:40/m - nearly a minute slower than what I needed today. So showing up this morning confidence was low.

I decided that today I would simply try to be around 7/m miles and see how it goes (focusing on next month's race). At the start I just decided to take it easy through about half the race and see how I felt. We did the park in a counterclockwise path which in my mind left us shorter, steeper climbs and longer down hill finishes - any time lost on climbing was more than made up on the back end as we stretched it out and took pressure off our lungs. Felt good all the way around and sure enuf as we left the park and started toward Times Square I was both on pace (slightly better than 7mm) and feeling good.

Decided to push a bit for the next few miles as it looked to me like we were going down hill on 7th ave. Every race there is always some point where I feel good and want to push my pace, the question is always, where to let it go? Fearing a move too early only to run out of gas just when I needed it most, and now at only mile 7 here was too early to start. But it sure felt like downhill and so I gave in a bit to the feeling. Down thru the square - past the cheerleaders 'cheering' to LMFAO (those cheerleaders had beards!), past the 2 man band of Stand Up Bass player and drummer in a giant pink gorilla suit.

Arriving on the west side highway and mile 8- I was still feeling good - but knew for me this was simply the start of the race. This is where you separate the wheat from the chaff. The last 5 miles are pretty desolate, you've left the park and the square behind you and now you're in the wind, on the flat west side highway, with little/nothing to look at and a long way to go. It was here I was supposed to push. Moved my pace up to 6:30ish and started moving past people I had been running with. One guy was dressed like Montezuma (I think) in full outfit w/feathered headdress that must of stuck up - mohawk style - 3 feet off his head - no really. I don't know how he ran so fast with that on but he got tons of love from the crowd.

Went thru a few more guys - some competitive, that didn't appreciate the pass and tried to stay with me. Sometimes I would just blow by them, sometimes their pace would throw me and I would lose my technique for a few minutes. Trying to do the math in my head I wasn't sure what pace I needed after doing at least half of the race around 7m/m and not sure how many miles (if any) i had been under that pace - but I figured it needed to be close to 6:30's.

About mile 10 I started feeling my body. Funny how you can be feeling great and then suddenly, in a flash, the pain comes and within a minute or two the wheels are coming off. Mile 10 started getting rough, hips and quads began barking and all of sudden I wasn't sure if I would be able to keep this pace the next 2-3 miles. Glances at my watch showed my pace all over the place at 6:40 and 6:35 - not good enough - and some hopeful ones, at 6:22 and even a 6:08. In the end I didn't know how I was doing but just pushed best I could in what was now becoming an outright fight with my body.

The last mile or mile and half were pure agony, pain in my legs and hips was stupid bad, and I really had lost all sense of where I was on the course or how I was doing. As we went into the Battery park tunnel (tip of Manhattan) I lost all GPS info. Inside there was a race clock that said running time was 1:25 (I've got five minutes to qualify) but it also said we were at the 15k mark. This info thru me into a spin as I thought the race was roughly 20k - leaving me another 5k (3.1miles!) to go and only 5 minutes. Completely deflated it was clear I would not qualify today. Coming out of the tunnel I decided to keep pushing the best I could just to see how well I could do and as we climbed out and leveled off another race sign appeared - but this one said 400 yards! I turned the corner elated and could actually see the finish. A race clock to my right showed the time to be 1:29:08 - I had just under 1 minute. I took off like a sprinter moving as fast as I could hoping my legs wouldn't give out in the next 30 seconds.

My heart was racing and my lungs began to burn just as I heard Laurie and the kids shouting me on. I gave a passing wave and finished 1:29:25 - slipping in under the qualifying time by just 35 seconds! Next year the 'qualifying' time for my age group goes to a brutally difficult 1:20 so getting in this year may be the only real chance I ever had. It was a nice surprise to get in.

(SBM Footnote:  Thanks for Russ and his Mom sharing this story.  Odd how we had so much in common in our youth and years later, we share the same passion for running.  Like Russ, I want to try and qualify for NY in August.  I will be seeking my fourth BQ in six weeks on my home court in Ft. Collins at the Colorado Marathon.  Given the recap above, we not only share running in common, but apparently writing as well.  Congrats Russ!)
Email Post
Labels: boston marathon NYC Half Marathon portland marathon