Some stories seem made up. This is not one of them.

As you've followed my journey, this year has certainly been a "hold my beer" nine months having lost both my parents in February and May. With many wanting to celebrate both of their lives, we had their Celebration's of Life in July and August. Both were grand send-offs. After the laughs, cries, people going back to work, and flying home my wife and I were living in my mother's Estate home.  Marlene lived the previous 17 years on Tappy Toorie Circle; only one of three homes I'd also lived in over our combined lives.

Then there was the matter of the estate. For the most part, it's been a labor of love to slowly go through boxes, drawers and file cabinets bit-by-bit with a lot of help from the family. My mom was a sentimental one so we've come across letters I wrote to her in college, grade school art projects and my daughter and nieces got a huge laugh over finding a photo of my mom with bra, panties, and a cigarette.

I intentionally avoided looking at that one.

Overall, let's just say there was a LOT of stuff to go through. Everyone has walked away with gems to remind them for hopefully generations to come of our beloved mother, Marlene.

Our cousin Dede (and her friend and sidekick Roberta) manage estate sales for a living and knocked out a TON of stuff in an Estate sale in July after sentimental items were handed out. Several boxes of mementos remained stacked neatly along a basement well. Among the boxes are countless Kodak photos in photo albums--for you kids out there, they used to print photos on actual paper; not simply taken, viewed, and deleted on your phone.

A large row of boxes and garbage bags lined the garage and a corner of the basement. Enough for another giant garage or estate sale, but as we're preparing to put her house on the market, time is running out so ads went up again on nextdoor, Facebook Marketplace, and Craigslist advertising "Estate Sale Leftovers For Free."

That brought on people that only wanted to only take picture frames or the woman who said she could haul off as much as she could fit in a Honda Civic--not much. Then one inquiry caught my attention. A woman was getting out of an abusive relationship and was willing to come pick up what was left in the basement. I was intent on an "all or nothing" as time is not our friend (listing the house in October,) and it's exhausting to think of going through more boxes. (Fortunately, I haven't had to do the manual labor part.) 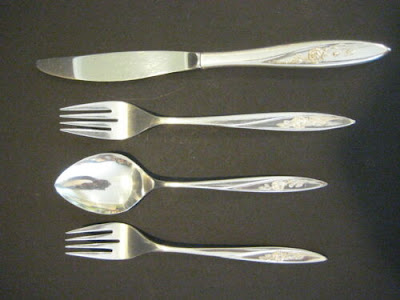 We booked an appointment on a weeknight as the Fall sun was setting early. Indeed her car was bigger than a Honda Civic. What struck me (and I certainly didn't pry beyond her nextdoor response) was how could someone abuse this woman? She was about the same age as my daughter and you couldn't wipe the smile off her face as she shared that she was sleeping on a futon. My twenty year old self tried that, and it's the worst night of sleep you can get. She thanked us profusely and offered to pay us. I insisted she "pay it forward" and that she was helping us by hauling it off.

I felt good going to sleep knowing we'd helped someone out and that a big item was "checked off the list." I texted the family her story and everyone felt good that our mother's cherished items of clothing, kitchenware, and odds and ends had a happy "next chapter" we'll call it.

During my morning Nespresso, I open up my email today and get my tenth? thank you from the young woman. I'd forgot that within all the boxes was portions of the tableware we ate with as kids growing up and over holidays as we'd return to "Detroit Circle" (previously mentioned daughter Nikki getting fed by her great grandmother Lela in the above YouTube "Camcorder Classics.")

We aren't talking silverware from the Queen's collection or anything stupid expensive, but priceless in terms of memories. I think it was likely the most common dinnerware for a time in the 70's and 80's.  It's origins could be from her mother Lela (I'll ask Aunt Marge) in Evergreen. In fact, I think my grandparents Lela and Lyle had the same set. It may have been bought with S&H green stamps, or from a gas station promotion; when gas stations and banks did such things to lure in customers.

Getting back to the young woman's note--it blew me away. She lost her grandmother to Covid this year and wrote;

Good morning! Thank you so beyond much for your help! I have been rolling over how much to thank you.

Your gift of rebuilding brought more than just items in need. You included some older silverware. I’m not sure if you knew this, but it’s part of a tea rose set. My grandmother passed away January of this year from COVID, and my grandfather is housing her whole set for me for when I’m able to get it here. She was working very hard to get the matching silverware, and just like that, it fell into my hands. It’s been a moment since I have been able to feel close to her again, and I am so beyond grateful for the kindness you have shown already! The items you have given will be beyond cherished and will build a new generation of memories with them!

Are you fricking kidding me? Wow. Tears were shed as I texted the siblings. I drew joy instead of sadness as I know my mom would want the mourning to be over yet remember and reverence to continue. As I was driving home from yet another doctor appointment, I couldn't help but think of the symbolism as the colors are changing in Denver. The rose is a beautiful but fleeting thing in a garden.

The rose bush in the corner of the patio in our childhood home on Detroit Circle never yielded much (unlike our home on Dexter Street) as it struggled in hard clay soil with no sun. I also remembered Elton John's "English Rose" version of  "Candle in the Wind" was played at our Grandma Lela's funeral and again at our mom's celebration of life. I've told my wife, it should also be on my play list when you celebrate me (hopefully a long ways from now.)

While the original song had no mention of a rose, the Princess Diana "English Rose version did. My mom jokingly referred to herself (half serious I think)  as a princess. I'm glad to see part of her silverware will hopefully last for another sixty years when our young recipient's kids and grandkids go through her cherished items

And it seems to me you lived your life

Never fading with the sunset

When the rain set in

And your footsteps will always fall here

Your candle's burned out long before

Your legend ever will.

May you ever grow in our hearts

You were the grace that placed itself

Where lives were torn apart

From a country lost without your soul

Who'll miss the wings of your compassion

More than you'll ever know