Seeking Boston Marathon Update: Back on the Shelf Plus Some Good News

For those that have been clicking these pages or looking at your inbox for an update, my apologies. Life has been absolutely crazy (some good, some challenges and over 83,000 flight miles this year) and another (gulp) forced layoff due to injury. I'm long overdue for an update so here we go...

Let's get this out of the way first. (Subtitled, "It's a Bitch to get Old.") I visited my ortho yesterday for my second steroid injection in my back. I have a combination of Scoliosis, Ankylosing Spondilits (a form of arthritis that leads to fusion of the SI joints--which explains some of my low back pain,) and some vertebrae deterioration...in other words, a hot mess with a large dose of denial. This is on top of knee issues, feet issues and a history of a few stress fractures, a bike accident (that lead to four broken ribs, collapsed lung, and torn shoulder labrum,) hip labrum issues, and deep emotional scars from Jr. High and High School related to all my social awkwardness (the later I gratefully grew...partially out of.) 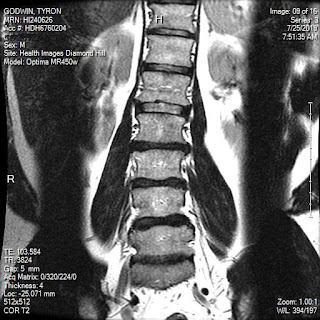 After an initial consultation and MRI, my current ortho recommended a steroid injection in my spine. Two weeks ago, I showed up for the first round and had another doc show up for the injection itself. We called (incorrectly) a bit of an "audible" and injected the SI joint as that seemed to be where all the pain centered itself. The first injection did not yield any relief so we went for round two yesterday.

Dr. Vu was not pleased with the audible. He informed me he took a second look at my MRI and said I had a bulging disc with a tear. Oy vey. Most everyone else in pre-op was getting doped up for the spinal (and various injections.) With a lot of work to get done and not having a ride home from the Mr. Toad's Wild ride on whatever dope they gave everyone else, I went with just a local anesthesia. Prior to going in, Dr. Vu asked, "remind me again, you're a runner?" This was after the nurse took my pulse and commented my resting heart rate was freakishly low--"you're a runner aren't you, she asked?" Um yeah. Dr. Vu officially said, you need to lay off running for three months. F*ck! I had been ramping up to do my second half marathon with my daughter at the Denver Rock n' Roll in ten days and equally important, my eleventh race with Liam on his 21st birthday in Vegas--more on that below...another audible.

That completely sucks as I was feeling otherwise pretty fit which doesn't make sense considering the fact that I only run 2-3 days a week (more often only two days a week, but cross-training with bike, swim and eliptical the other days.) The night before the bad news, I ran seven miles with a two mile warm-up and half mile progressives starting at a 7:41 pace up to a 7:03 pace. Freakishly fast considering how little I'm running right now. Enough of the shitty pity stuff. Onto the good stuff.

As I stared this blog nearly 500,000 pageviews ago (my mom clicks alot,) I obviously had the goal of qualifying for Boston (thus, my namesake.) My secret desire (suitable for print) was to somehow grace the pages of Runner's World Magazine--I know, I know (insert you're so vain or you're a narcissist,) but many runners have a bit of a competitive streak. Did I tell you about the time, I
competed for the fastest water slide time in Hawaii at a Sales award trip winning the title of "Pink Torpedo?" Yes, I'm competitive, and thanks to Mr. Liam and Simple Hydration, I finally graced the back pages of this month's issue of Runner's World (pg. 91 for those that subscribe.) 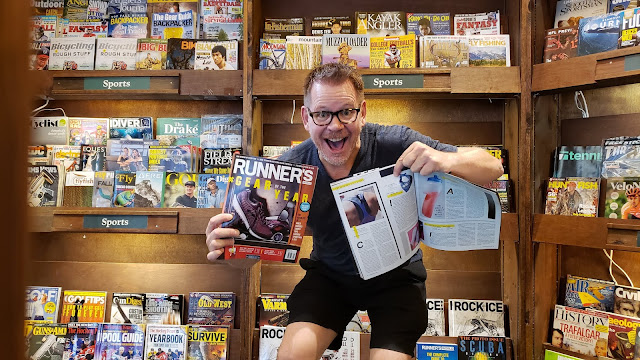 Huge thanks to my friends at the mag and my buddy Kit Fox there who turned me onto the interview opportunity. The real story is my relationship with Liam and the bottle that holds my Nuun nutrition in all of my races.

Insult to injury. My new race shoes from Adidas showed up today the day after the above bad news. Motivation for my next run now in 89 days and counting. As mentioned above, one of the "circle the calendar races" is (was) with Liam in November celebrating his 21st birthday. I felt like I let down Liam and his parents but Joan (who's an angel) understood as she's dealt with over 150 surgeries with her son which always puts my challenges in perspective. This means more adult indulgence in Vegas and either I'll do the 5k walk or have one of my kids push Liam and I'll join them for the 50 yards across the finish line! For a kid who frankly wasn't meant to see his 21st, I wouldn't miss this for the world!

If so inclined, bring your cowbell to Vegas and help us celebrate the big 2-1 with my number one guy!