The One Marathon Medal You Don't Want

It's been a topsy turvy year for my main man Liam. Forget the fact that my special needs buddy lives 1,000 miles away which presents financial and logistics challenges for the race calendar, but most importantly, I need him in his Team Hoyt blade and NOT in a hospital bed (three wheels, not four.) I have had my own body rebellion going on (lost track of how many MRI's I've had,) but constantly try and put things in perspective compared to the medical challenges facing Liam living with Hydrocephalus and Cerebral Palsy. 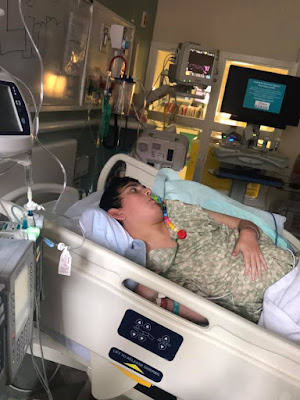 I like to think that running has increased his quality of life and keeps him out of the doctor's office and hospital. When I first met Liam, it seemed that he was in and out of the hospital all the time with more brain surgeries than I've had races in my life--over 100. Unfortunately, the team just survived a big scare this last month starting with a simple fever. As Liam is susceptible to infection and going septic due to his lifetime of medical issues; mom (Joan) and Dad (Fabian) keep a watchful eye on any potential onset of illness or infection.

With no sign of a break in Liam's 104 degree fever and oxygen sats dropping, mom and dad loaded Liam into the ramp-equipped family van to head over to Liam's second home at Rady's Hospital in San Diego. With Liam's severe scoliosis, he fundamentally has one good lung and his breathing became "chunky" so an MRI was ordered. Upon instinct, Joan asked that they would have a look at the resulting images to see if his shunts were delivering as they should. His two (brain) shunts are in place to take pressure off his brain fundamentally draining from the shunts in his brain and deliver south to his abdomen.

Sure enough, "Mama Bear's" instincts were correct and the technician and surgeons determined that one of the two was detached. Off to surgery number "something north of 150." With no break in the fever the growing medical team had to decide if young (twenty year old) Liam was healthy enough for surgery. After a 24 hour wait and ton's of antibiotics which created their own bizarre side effects, a brain and general surgeon deemed he could not wait. 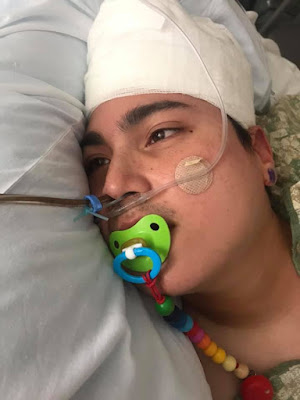 Approaching his second week in the hospital, the surgeons went down a familiar path of hooking up the shunt in the brain south to his abdomen. His lumpy skull (due to all his surgeries) was shaved and talk of a scope through the belly button were scrapped for another long incision in his belly. He would later literally lose his belly button as there have been so many procedures and scar tissue that it's simply gone. During the surgery; two concerns arose. One, due to all the surgeries, there's literally a trail and build-up of scar tissue in his abdomen area that will limit his future options. One doctor warned that his next surgery and path would have to veer the tubing through his heart. Mom and team stressed over this but the second complication was a slight nick in his small intestine during the surgery. Due to his hypersensitivity to infection, this created enormous stress for both parents as Mom called to tell me the latest.

Given my determination as a distance runner, I tried to offer Joan my best, "he's got this." Not before losing ten pounds, rounds of industrial-grade antibiotics (and reactions,) dangerously-low oxygen levels, facial tics and nystagmus (repetitive uncontrolled eye movements. Fortunately this all passed with time and care. 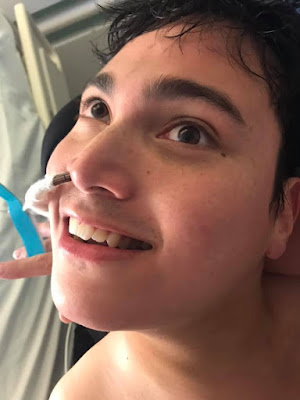 After eleven days, with a new shunt, no belly button, and a new scar that would make Frankenstein jealous, Liam was cleared to go home. He went several days without much more than fluids. Liam has one good hand that will either grab a pretty girl or a variety of snacks typically in his wheelchair's red solo cup (he loves popcorn.) Beyond the snacks, he has a daily routine of formula that travels to another tube that enters his belly. This tube has also had a history of getting ripped lose if you forget he's hooked up.

Most twenty year old young men who have a fever, don't leave the hospital with a shaved head and a nine inch zipper scar up the belly, but Liam is not your average kid. He's extraordinary and was soon slowly strumming his ukelele at home and training to gain some of the weight he lost with his latest adventure. Liam is one tough kid and survived the toughest marathon yet since I've known him...from a hospital bed.

Aside from providing a medical update on Liam, I have to constantly put my challenges in perspective. My knee, my back, work and life stresses can seem insignificant when compared to what Liam goes through in his life. Certainly provides clarity but also drive for me to keep training for our next race adventure or simply a sweaty selfie on the Irun4 Michael Facebook page.
Email Post
Labels: #cerebralpalsy #hydrocephalus cerebral palsy hydrocephalus