First off, an apology for the tardiness of my post. I never (never say never) travel on race days. The better the race, the better the party, and after my tenth race with the "Amazing Mr. Liam," we partied like rock stars at Denver's Milk Market and had to head off to Florida for work...leaving behind the GoPro video for this post and a three day trip turned into a two week trip. I digress, but now to the good stuff!

Liam and I completed our TENTH race together in my hometown of Denver. As you can imagine, traveling with two wheelchairs, medical gear, and never knowing what challenges may arise, we've largely raced in San Diego where my special needs buddy Liam and his parents (the equally amazing Joan and Fabian Gutierrez) live.

For the double extra special bonus, my daughter decided a couple months ago to sign up for her first half marathon to run with Dad and Liam. I didn't tell her how crazy that was with someone never having run more than five miles, but she's young and super proud as she crushed it! (As a side note, I have my third future book unwritten titled "Bar Stool to Half Marathon in Six Weeks.) Prior to Liam arriving in Denver, I was contacted by Allie Levine from 9News who had in interest in Liam and the relationship we formed. Below you'll find the interview (see online HERE) in our Revel Rockies race video.


A few firsts not captured in the video; my handbrake went out and didn't realize until my first downhill in the predominantly downhill race. Yikes! (more like, oh shit, no brakes!) I panicked briefly and realized I'd have to run a bit more conservative race given the over 300 pounds (Liam, the blade, and myself) flying down from Evergreen to Morrison, Colorado.

Other "foot faults" included; my daughter bag-checking her Simple Hydration bottle with Nuun nutrition (Dad gallantly gave her his; but had plenty stowed in the running chair pouch,) me having to tie my shoes (forgetting to double knot) in the first few miles, and leaving Liam for a quick porto-potty stop along the way. 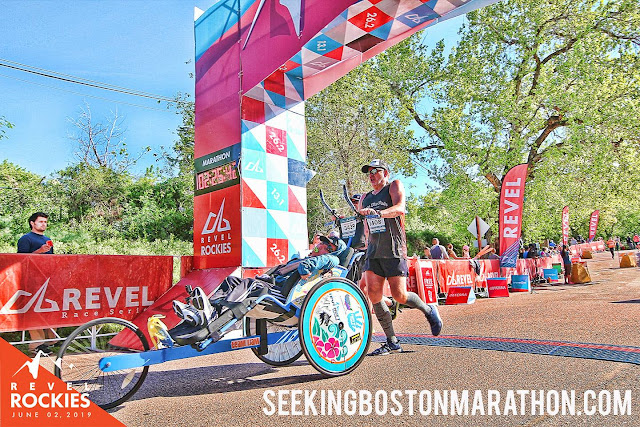 I had trained well and had hoped for a much faster time, but quite honestly was the most fun I've had in a race with Liam, I loved racing through the town where my mom grew up (Evergreen,) and seeing my wife, mom, brother, sister, brother-in-law, and my inlaws at the finish line. My daughter was crazy "butt hurt" her friends all had made other plans only to see them (with her mom and grandma) at the finish line. 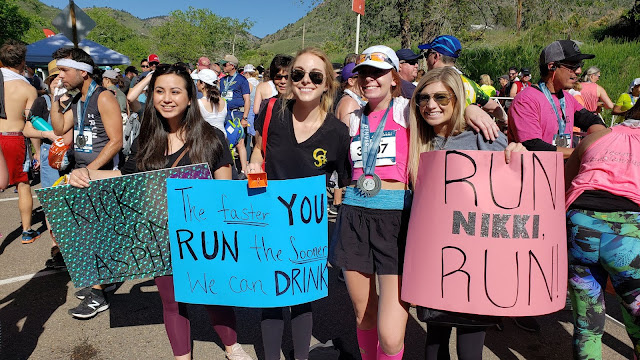 The "Colorado bonus" was we saw the Rockies, ran along a creek and heard the water roar (as Liam is blind, but has keen senses,) saw a heard of Elk and ran past a snake warming himself on the warming asphalt--Liam did now hear the snake but heard the squeals behind us as other runners came upon the reptile.

For those that don't know Liam, I met him through IRun4 Michael which matches special needs individuals with runners. Liam suffers from Cerebral Palsy, Hydrocephalus, and scoliosis. He is blind, does not speak, and is confined to a wheelchair.  Ty and Liam race together with Team Hoyt San Diego. More on Liam HERE.

9News story (included in front of race video above) below.