Hard to tell if this was one of dumbest ideas I've had or the hardest race I've competed in. Likely a little bit of both. 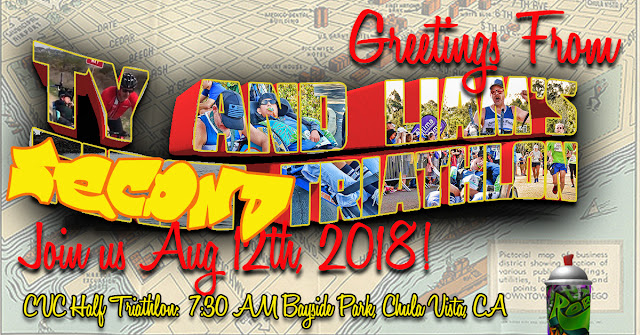 Underneath last week's triathlon at the Chula Vista Half Triathlon (Liam and I competed in the international distance) have been a few goals that have been brewing in my mind, but haven't been spoken (other than to my consigliere and wife) and my run buddy's mom, Joan. With five Boston Marathon's to my credit, two other world majors, several BQ's and age-group podiums, I have felt there's not much more for me to accomplish as an individual, but more to accomplish with my special friend Liam. My body has certainly voted on the matter as my knees have cartilage issues that simply made my semi-(quasi, kinda sorta maybe) distance retirement a thing. 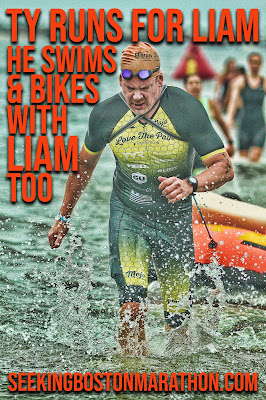 Back to the few goals in mind. Liam's mom is quite similar to me in that once she's tasted a bit of the elixir that is racing, competing, and sometimes getting two medals in a race vs one makes you want more, not less. The Lay's potato chip syndrome (you can't eat just one.) What this means is one 5K was not enough, we had to do two. If you can do three point one miles, why not a half marathon? If you're a triathlete, then why not let's do one together with Liam?

Don't get me wrong, parents Joan and Fabian weren't exactly twisting my arm here. It's been an awarding journey with our seventh race completed together last weekend (more on that below.) Given what we've already accomplished, I know Joan, just like myself dreams of her son competing in a marathon and like me, chasing the unicorn. Yes, just as I sought the Boston Marathon, so are Joan, Fabian, and Liam. Dream big or go home, right?

With my decision to "step up" last weekend from a sprint distance triathlon to an international distance marathon, there was a third (for those not keeping up, goal #1 is to run in a marathon with Liam, and goal #2 is to qualify and race in Boston with Liam) goal with this foolish choice and that is to compete in a half Ironman with Liam. There it is. I said it. I put it in "black and white." 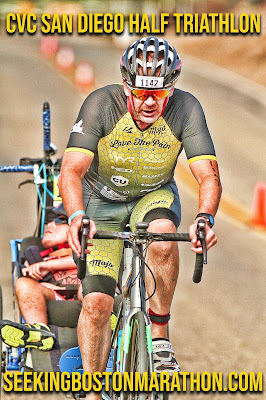 As I privately researched what was required to qualify for Boston and to compete in an Ironman as a duo-athlete (not to be confused with duathlon) team each had their criteria. To get into Boston (or New York City Marathon,) there's a finite number of available slots available through organizations such as Team Hoyt. I happen to be a member of the AMAZING San Diego chapter. I'm special in the sense that I live in Denver, Liam lives in San Diego, and I'm not related to him (many are parent and child tandems.) Short version is we have to complete a marathon in less than six hours together. Easy peasy as long as my quesy kneesies comply with training. I'm grossly over-simplifying the process but that covers the marathon goals and entries are limited. As for the Half Ironman, to even apply you have to have completed an Olympic (International) distance race together as a duo.

That brings us to last weekend. First let's consider the fact that aside from our seven races, we've trained together only once (preparing for our first Sprint Distance race this last March.) Read that last sentence again. The foolish part is the understated fact that I'd never done an Olympic distance myself and as I started estimating the time it would take to complete, I knew I would wind up being out there longer than I've been exerting myself since the New York City Marathon in 2016 (my last marathon.) We signed up for the Chula Vista Half Triathlon (in the international distance) that would include a 1000 meter swim (my second in salt water,) 28 mile bike ride and ten kilometer run.

Leading up to the race, I felt very strong in the swim, but again keeping honest with everyone, I'd never rode a bike that distance; race or training run. Common advise to follow in any race is don't try something on race day you haven't done before. As the great prophet Napoleon Dynamite would say, "friggin' idiot!" Yes, I'm violating all the rules here. I did however increase my mileage to twenty six miles on a training ride and intentionally slowed down my pace from a normal goal of 20 mph (in a race) to roughly 15 mph. My logic (without ever having a triathlon coach) was (like going from a 10k to a half or marathon,) I'd need to "dial down" the pace if I was going to be able to finish the race on the remaining six point two miles on the run course.

Blow-by-blow. some of the race highlights;

1) Attending the walkthrough of the race the day before, I knew we were in for "one hot mutha."Race day did not disappoint with temps hitting 82 degrees by mid-morning.
2) Due to the temperature on race day, this was a non-wetsuit race. I'm not sure if I've EVER had a non-wetsuit race. Why stop there with things I hadn't tried before in a race. I stuck to my Love the Pain tri suit as wearing a wetsuit would have voided our USAT-sanctioned event results. Thus, voiding one of my objectives for stepping up to this distance.
3) LOVED, LOVED, LOVED my new Roka R1 swim goggles. My son Keenan was my "swim buddy" to help with safety issues that may have arose on the raft and Ty pulling the raft leg of this race. (I just pulled a George Costanza by referring to myself in the third person.)
4) Keenan was a huge help in the water helping me stay on course and it was probably my best swim ever in a race. (Sidenote: to the asshole old dude that pulled my son's leg and dragged him underwater to pass, you're lucky I didn't find you later, this old man would have kicked your butt. Not cool dude.)
5) Our transition team was amazing. With duo tandems, USAT allows "assistants." Getting Liam out of the raft and into a wheelchair out of the water is a two-person job. I'd intended to have help getting up the muddy beach and up a steep berm to the sidewalk chute heading to transition, but adrenaline kicked in, and I handled that just fine. Given the time we were going to be out there, our first transition was quite long as we planned a diaper change for Liam as another three + hours would have been miserable for him. As mom and dad took care of Liam, that gave me plenty of time to switch into bike shoes and helmet and change from our knobby (required for the beach) mountain bike tires to road tires for the 28 miles ahead.
6) I was "nervous as hell" the night before after driving the bike course and seeing this course was anything but flat and had some tight turns and pot-holed roads.
7) I intentionally went even slower on the bike on the first of two fourteen mile laps given there were at least four hills that would push my limits and stamina. One of them required my absolute lowest gear and still required some "out-of-the-saddle" climbs. For those that haven't competed in a duo athlete triathlon, the swim is easier than it looks, the run is no big deal (as long as you're not going uphill,) and the bike is by far the hardest as I'm towing a total of 315+ combined pounds.
8) Not a surprise, after the race I clocked our bike average at 11.4 MPH on my bike Garmin.
9) I completed the first loop of the course while still under some cloud cover in an hour and eight minutes. The sun was starting to come out meaning those hills would be in direct sunlight and once again, I started to question my sanity as I "did the math" and realized my projected finish time I'd given Liam's parents was WAAAY off. "How can I go over three and a half hours when I hadn't done that in training?" Stupido.
10) With two big loops and two mini-loops within each big loop (so I could climb that nasty ass hill four times) I was able to see my Team Hoyt San Diego teammates quite a bit. We all echoed encouragement which (I know) helped me.
11) Liam was quiet throughout, and I was equally fueled by all the athletes that whizzed by yelling out encouragement and praise for what we were attempting.
12) I finished the bike leg and I could tell the look on my wife's face was "are you okay" echoed by her question, "are you okay?" They were freaking out as I was coming in around two hours and eighteen minutes and I still had likely an hour of running now in full on heat. Parents checked on Liam as I switched to run gear and dumped cold water over my head to try and cool down my engine.
13) The run was also two loops and ran along the more picturesque marina and waterfront. The bike course was actually quite FUGLY; so don't pick this race for the scenery.
14) Huge props to the woman in the run water station around mile one I'd cross four times. Liam's engine (I could tell) was also running very hot and I doused him (and myself) with ice water each time through as safety and completing the race were primary and time was of zero concern to me.
15) It was my slowest 10K ever and once again appreciated Keenan running out around mile four to see if we were okay.
16) As I always try to do, I finished with a leg kick in the final 100 meters and have no idea where that energy came from. As we crossed the inflatable finish line, I felt like crying with emotion but was literally too tired.

My toughest race ever out on a course for over four hours in the heat on a very tough course but a couple steps closer to our goals. Dream big or go home.