Editors note: This post (like all other SBM) posts reflect facts and thoughts of my personal life. It does not reflect the views of my employer. This post does cover the "lightning rod" topic of race, and not the run race version. I won't start this post by saying I'm not a racist as that's normally an indicator that someone actually is. I sense, I'm already in trouble.

If this were an old-school paper, there would have been a lot of broken pencils and stubby erasers as I've mentally started, stopped, started over, and shelved this story for months. The answer as to why is simple. The topic of "race" and my writing style (at least attempts to be) light, sarcastic, sometimes humorous may not mix well. The question is, given that style, how do you write about race. Very carefully.

My wife has an amazing and creative gift-giving talent. At Christmas last year, I opened a gift and my face scrunched up like my late grandma Lela's--kind of a McKayla Maroney off-center pursed lips and confusing squinty eyes. I was confused as this gift involved spit...and a 23andMe ancestry test.

Bear in mind that (visually) I'm "whiter" than a brand new set of white linens bleached in the first wash. I'm arguably whiter than Bobby Brady. Don't be offended. It's where I grew up. Suburbia USA born from what society would label as two white parents. Growing up, I really only heard one thing...that my grandfather on my mom's side was part Swedish. As I went into my twenties, I'd wished (at least one day a year) that my red hair came from Ireland so I could legitimately claim, "yes, this redhead is Irish. Pour me another Guinness!"

As a young adult, I started to learn more about my father's heritage as a Native American. His family had roots in North Carolina and Virginia as tobacco farmers reigning from the North Carolina Lumbee tribe. Not the larger more well-known tribe names such as Cherokee or Apache; my friends would (in good spirit) laugh at the tribe name and notion that I was even a remote percentage of American Indian. Yeah...right!

So I spit into the test tube, sealed the package, and sent it off to 23andMe for analysis and results. My wife's results came back several weeks later somewhat uneventful in that it "matched" her expectations of her ancestry composition. My results were a horse of a different color in three big ways;

1) I was in fact part Irish. Oh happy day. Erin go Bragh!
2) American Indian was there (my Dad's birth certificate states both parents as Native American) but it was a surprisingly low 2.6%. At one point, I thought I was as much as 25%. Not quite.
3) The bigger surprise was I am 9.1% African.

Wowza, or more like "holy Maury Povich!" I somewhat suspected a scant percentage there. As I stated, my dad's parents, or my grandparents were "salt of the earth" tobacco farmers in Virginia. They both died when I was much younger. Honestly, I didn't think about their heritage at all given my young age. I viewed them as hard-working farmers. Not Indian, or anything other than loving grandparents. 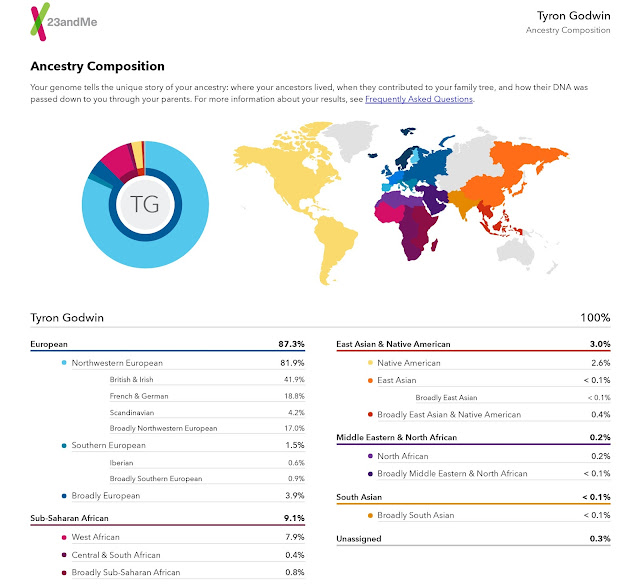 I say there were suspicions in that some family members seemed to have something other than an American Indian background. Is that Indian or perhaps thinking back to the early South, was there not some "co-habitation" going on? Clearly there was. Not racist, but factual as my report points out the African component was introduced from 1840 to 1750 and another period from 1780 to 1690--the same time period that Native American shows up.

My reactions to the results were somewhat uneventful; in other words, I'm glad to know my true genetic make-up and it certainly provides for some great conversation(s) around my ethnicity. The fact is I still grew up as a white kid without prejudice, braces, glasses and a fanny pack. I mean...REALLY (stereo-typically) white.

Anything I say beyond what I've already written would come out wrong or racist, but given the tumultuous racial state of our country, it's at least given me a reminder that other than the Native Americans, we all came here from somewhere. Granted, the vast majority of my geneology comes from Northwestern Europe (81.9%) I revel in my 41.9% British and Irish roots and my 9.1% African composition.

There are two kits you can order from 23andMe. The first I've described in this post, the second provides other genetic "markers" with propensity for certain medical issues and body composition. Nothing too shocking there (thank goodness on the severe medical front as there are no indicators for Parkinson's or Alzheimer's,) but the report did point out I have "fast twitch" muscles. Perhaps this makes the most sense out of all of this and explains my sub-twenty minute 5k PR.

Have you had your ancestry tested?

(Footnote: This is not a paid endorsement. No compensation has been received from 23AndMe.)