The third installment in the insanity tour or "intensities in ten cities" installment. I'm now (at the time I'm tapping on my keyboard) on the Acela Express from Washington D.C. to New York City for a little race called the TCS New York City Marathon. To say it's been a wild ride is an understatement.

One year and one week ago today, I got two dreaded phone calls within 48 hours. One from my dermatologist that I did indeed test positive for skin cancer and the second was from my ortho telling me the pain in my foot was not imagined, I had a stress fracture and could not race in the race in the race I dreamed of and finally qualified for. You know the story (from these pages.) I went to New York anyway to try and put my "happy face" on, but my wife and I both knew, I was beyond disappointed. Two walking boots and a year later, I am back on (Am)track. 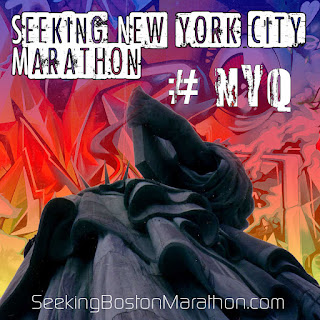 The insanity part (if that doesn't make your run mojo quiver already) was the gauntlet of travel and (generally good) obstacles that were between me and arriving in Penn Station here in a couple hours. Most runners have a two or three week taper. That's generally resting the body after typically running 500-600 miles to have you ready to run 26.2 miles. I LOVE the taper and think of it as re-charging the battery and enjoying the fact that the work has been DONE.

As I wrote in the first two chapters of the insanity tour, I moved last weekend (worldwide headquarters and sleeping headquarters of SeekingBostonMarathon.com.) Who in their right mind MOVES the weekend before going out of town for a marathon? That would be be, but not before spending the previous three weekends out of town. Who goes out of town for the entire weekend, the three weekends before moving? That would also be me. Been there dumb that.

Seventy eight flights this year and the five weeks leading up to the race have included Seattle, Denver, Washington D.C., Fort Collins, Bethlehem. San Diego (to see my run buddy Liam!,) and now on the train to New York City. Whew! Okay, I lied...not exactly intensities in ten cities (SBM sticker to the first three that can name the 80's rocker whose tour name used the same moniker,) but has has a nice ring to it. 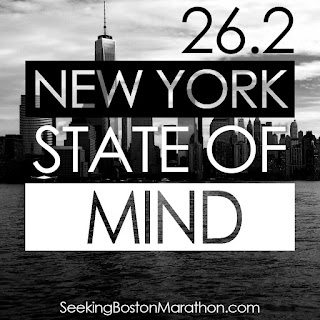 The (hopefully) last curve on the road to the five boroughs was between my absolutely fantastic half marathon in Bethlehem three weeks ago and deciding to run one last twenty miler before hitting taper. I've used a modified (bastardized) version of my coaches training plan and a Furman First plan. I say modified as I had my second foot fracture in May which sent me into a boot for a second and third time this calendar year. Those boots aren't made for running. I honestly felt there was NO way I could train in time for 2016 NYC and you only get one injury deferral. One and done.

Given that, I didn't really overly advertise I was racing New York City but as I got closer, hints of the "Big Apple" subtly crept into my social media world. Back to that decision to run "one last" twenty miler. I did it on only four days rest after an "all out" half marathon (and rewarding) effort at the Runner's World Half and Festival in Bethlehem. I'd felt a "little something" in my knee in the race in PA, but I didn't really feel any affects after the race or on the short long run a couple days later. On the twenty miler however, the wonky knee felt "wonkier" (is that a word?) somewhere in the second half.

After that long twenty mile training run the right knee started to swell. I got on a plane to San Diego that following morning to meet my run buddy Liam for the first time at his 18th birthday party. At that point, it was definitely sore, and noticeably swollen. I was thrilled to meet Liam and his family (post HERE) but just like I pretended to be "okay" last year in New York City, I was freaking out on the inside. You got to be f*cking kidding me! I worked SOOOO hard to get back to this point. My mind and imagination were running wild. Watching NFL games that Sunday I saw "this player and that" that were not playing due to "torn this and torn that." F that said the cat in the hat.

Spit, spat, shit, shat, what is up with that!

At this point, you're wondering, you're on the train to New York City, so what's up with the knee? (Are you running or NOT?) After San Diego, I went in to see the same ortho I went to last year (Steadman Hawkins in Denver,) and got the X-Ray and as I expected, "just to be safe" we did an MRI. I honestly thought, something was torn. Did I "jack it up" doing the November Project workout in Bethlehem? Did I do something really stupid by running twenty so close to a half marathon? Final verdict was a "green light" (whew!) to run New York. The diagnosis was some arthritis in my cartilage and a bit of a spur. The good news; no tears, and my ACL was strong--thanks to a ton of leg and strength work this year.

The bad news was I still had to move a five bedroom house the weekend before a marathon when my ortho told me to "take it easy." Despite the "green light," I didn't take it easy (had no choice) and seven days before the race, my knee still hurt and if I was being honest with myself, I was thinking, "there's no fricking way I can run 26.2 miles on this sore knee." But alas Virginia, there is a Santa Claus and comebacks can happen.

Over the last two weeks I honestly did not run and took my docs advise to "take it easy" (other than moving a house.) He put me on an anti-inflammatory med (take two of these and call me in the morning,) and I went through more ice than Charlie Sheen melts in his Jack Daniels over a weekend. (That's a lotta ice on the knee.) Fast forward (sorry for the long short version) to the last forty eight hours. I flew to DC for work on Tuesday and was still thinking, "I can fly home and cancel the hotel and race" if I was not "fit" to run. Last night, I put the knee to test and ran a slow (9 min. per mile pace) four miler.

Drum roll please...no pain during or after.