Has twitter become a Jr. High School cafeteria? I'm trying to understand; peoples motivation for having a twitter account to start with, who they follow, and some of the "games" people play in this space. 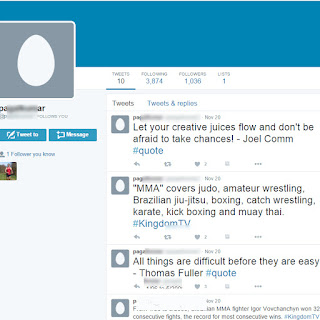 I am not a social media expert, but I did speak at the Fitbloggin' conference earlier this year (and didn't stay in a Holiday Inn last night) on building blog readership through social media. I am not a social media "titan" like Katy Widrick (she also spoke) who does this for a "day job," but I have learned a few things along the way, and a few things that really bug me. There are common themes
and "best practices" (including follow ratios) across the most common social media platforms; Instagram, Facebook, Pinterest, and Twitter (throw in Periscope and Google+) but today I'm focused on the "so Jr. High" follow and unfollow "game" and perplexing world of who follows who in the "twitterverse." (Same concepts apply to the above mentioned platforms.)

For starters, if you haven't figured it out, my blog is about running and triathlons. If you tweet about running, and put an effort into it, I'm likely following you back. I have a number of social media channels that I use to promote my blog or get out the brief thoughts and rants that go through my "Willy Wonka" brain.

Before we get to the cafeteria, let's start with one basic ground rule; at least take the effort to load profile photo icon vs. the empty egg shape. #showsomeeffort

If your name is Bart, Meb, or Kara I'd understand if you don't follow a slow run blogger from Colorado like me. They get a million requests...I get it. They've earned the right to have an elite follower-to-follow ratio.  Having said that, Bart follows me and Meb and Kara have been known to at least favorite a tweet or two of mine (thank you!)

If your name is NOT Bart, Meb, or Kara, and we have similar interests (running!) let's connect! Don't pretend you're the aforementioned "run elite" when you're not. I ran into a well-known blogger at an event at this year's Boston Marathon. I was with my teenage son. I explained to him that I knew her, followed her, and have subsequently dropped her. She has wide success in the "bloggerverse" and "on paper" we should be friends like I am with other blogger heavyweights like Sharp Endurance. I met Linzie (Sharpie) briefly two years ago in the Boston Commons on 5k day, and we've followed each other since. That's how it's supposed to work! Dani from Weight Off My Shoulders is another one that comes to mind that knows how it works. Approachable, genuine, likeable; this might serve you well in life. 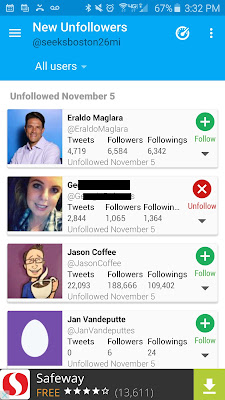 Back to the snob (I won't "out" her here.) She (like many of us,) has giveaways, which are intended to promote product and ultimately drive traffic and followers. Your entries to win are largely follow her on all her media channels with a slim chance of winning...and she won't follow you back. Help me understand what makes her think she's one of the Kardashians of the run "twitterverse." You have a good story, but you're not Beyonce. It's okay to engage in a dialogue or make a few friends. Enough said there.

Just to be clear...Bart, Meb, and Kara are not snobs here.

This month I had someone follow me on twitter and she met my criteria for following back (which starts with being in the world of fitness, nutrition, running, and triathlons.) I quickly followed back and promptly got her automated direct message to my twitter trying to engage me further to check out her page or book. Her numbers were low, but that's not part of my criteria (that would be the "Snob's" criteria.) All's good and she almost made my exclusive (not really) Friday Follow List. (now who's being the snob?) She promptly dropped me within 48 hours. This one bugs me more than the snob. Troll for followers, then promptly drop them. Perhaps my story of cancer scared her off? It seemed like a planned move and we've all seen it. In her case, she misspelled her own name in her twitter handle. Really?

What part of my story on any social channel attracts the "Get Rich or Die Tryin" followers? This falls into my "I'm sorry, but not following you back" category.  Closely related to "guido" are the sites trolling for lonely guys looking for paid female attention. Yes, I appreciate that thing known as the human form, just as I would in a Renaissance painting; but, just because I'm a man does not mean I want to sexy Skype chat with you. Yes, I like nice cars, I love the female form (particularly my wife's,) and have been known to go to Vegas, but let's talk about running...please. Don't even bother. I know I can buy followers for a penny a piece, but I'm not interested. I'd rather grow organically. Most of you "Gain Followers" monkeys ironically have fewer followers than you are following. Perhaps the conflicting advertising message? The one shown here got extra creative using a Star Wars' "Death Star" as their profile picture with a serene snow scene as the cover page. WTF? 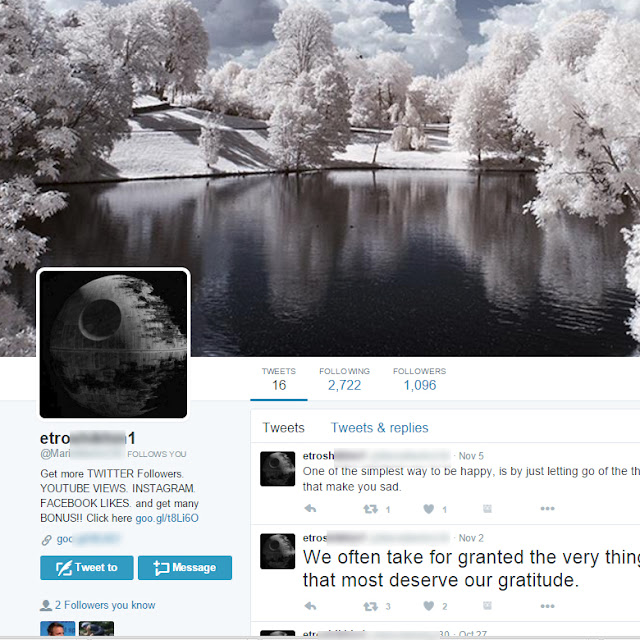 I admire the corporate marketing department that's trying to figure out social media, but I'm not sure what a car dealership in Boca Raton, Florida or a clothing detergent brand has to do with me. 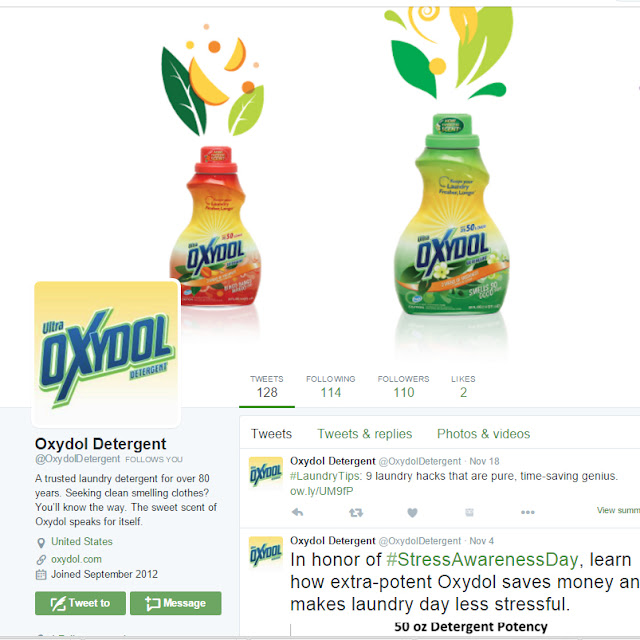 Perhaps they think that runners are washing clothes all the time so "let's go after them" as the strategy. The profile above reeks of some over-aged (like me) marketing person trying to figure out twitter or "I hired the wrong intern" to drive my twitter campaign and it went awry. In this case, I will play my "snob card" and say, we just don't have enough in common, and you're really not putting a real effort into this so can we politely go our separate directions? Don't mean to be mean Oxydol, but "C'mon man!"

The one below just baffles me. For starters, I don't think that's really Lopez. I smell stock photo. Yes, you sprinkle a few buzz words I'm interested in, but I don't even know what you're selling. You went out and made 801 friends, and 59 were polite or didn't know what they were clicking on and followed back. Sorry...you're not really trying to entertain, educate, or engage (you also haven't tweeted in a month.) Show a little effort, huh? At least it's not the egg shape profile pic. 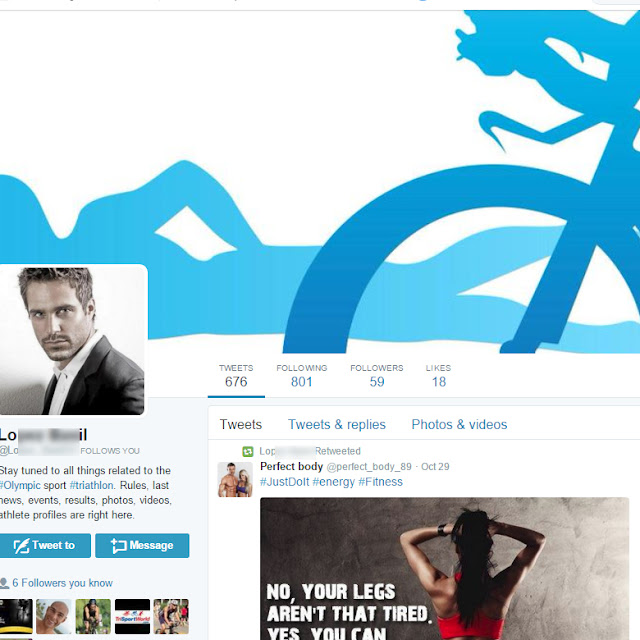 To end on a more positive, or perhaps less sarcastic note, occasionally, I get hit the "gold standard" and have elites (like Bart...thank you,) Runner's World (Thank you, thank you!,) and Brands that see something in my passion for the sport and decide to click and follow. Garmin is the latest. Yes, I do have some brand, sponsorship, and ambassador relationships. Yes, sometimes, I review products and promote them on my channels, but there's also brands I'm loyal to where I extol their value and expect nothing in return. A follow back from them was nice this last month. Thank you Garmin. Even if you promptly unfollowed me last week. You followed me for a few days anyway, it was nice while it lasted. I won't throw you into the "troll" category as you deserve some level of snobbery as a Tier 1 elite in "twitterland." I'll still follow and re-tweet your content. 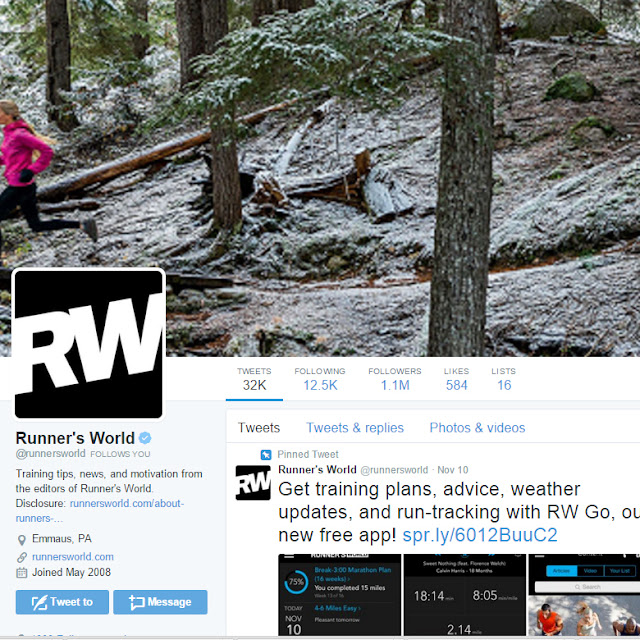