I can't seem to catch a break when it comes to bad breaks. If you follow my twitter, Instagram, and Facebook, you know by now that for the first time I will have to withdraw from a marathon due to injury. The foot pain that I was in partial denial over did not dissipate despite all the crazy "witch doctor" treatments I've tried over the last two weeks. All this over brushing my teeth (confused? Read my last POST) in Cairo. Blame it on Cairo, or more aptly, blame it on my stupidity or overdose of "alpha male" testosterone, I have a stress fracture in the 5th metatarsal of my left foot, and I have the sexy Frankenstein boot to prove it. 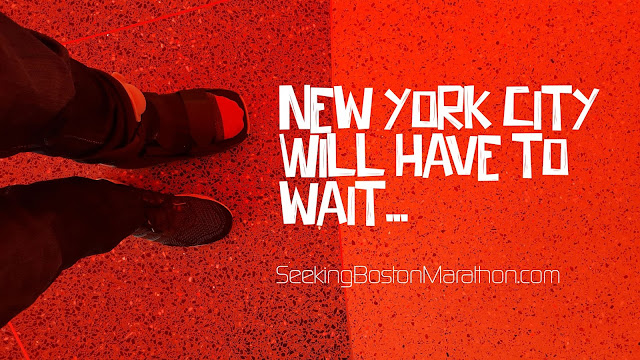 The results from Steadman Hawkins MRI came from Dr. Jeremy Saturday morning. Eight days before I was scheduled to race in the New York City Marathon for the first time. The Dr. instructed me to get into a boot right away and (obviously) warned against any running as this could lead to further complications that would require surgery.

While I should have bailed on the Boston Marathon this year, this is new territory for me (not entering a marathon I'd trained for;) including the decision; "do I still go to New York City" with all the travel plans set long ago. I took to a social media (unscientific) poll and asked my run peeps, (and my wife,) do we still go to New York City and try and make wine out of vinegar, or bail? I got a variety of great responses including;

"Buy your wife a designer purse with the exchanged tickets or money not spent in New York." (While my wife liked this one, I wasn't sure how it would help cope with my depression.

"I'd cash in the ticket for a beach seat and let the sand and salt water heal those toes."

While a couple suggested staying at home or away from the race, the overwhelming response was, Go!  My wife and I went "back and forth" with the options, and while she's scared to deal with my emotions over not running while being around the race, we're going for it! I guess I am back to being in  New York State of Mind. 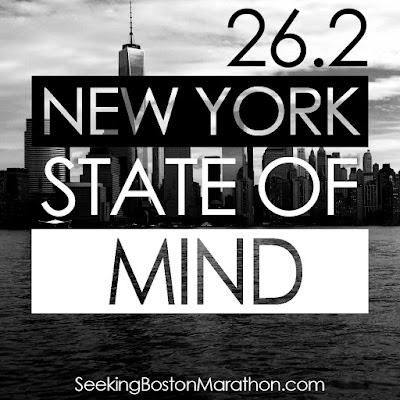 One of the reasons is that when I went to Boston this year, I knew I was in for a tough race (with an yet to be diagnosed torn hip labrum) and really didn't soak in the full marathon experience. That was the right choice in some respects as I spent high quality time with my high school graduating son, but avoided a lot of the typical meetups I would have done if healthy (and with the right demeanor.)

This injury does not take away all the hard work I've put in since May to rehabilitate my torn right hip labrum as part of my 2014-15 "Injury Tour." New York City and the stress fracture will hopefully be the last leg (pun intended) of that tour. For those old enough to remember, or young enough to Google, this tour rivals Evel Knievel's glory days on the motorcycle. My injuries include four broken ribs, collapsed lung, separated shoulder, torn shoulder labrum, torn hip labrum, and now foot stress fracture...all in fifteen months. Perhaps I need a break (pun not intended.)

When Dr. Jeremy called Saturday morning, he told me to come into their offices first thing Monday morning to discuss the results in greater detail and get a walking boot. I did not want my rehab "clock" to start on Monday, so we found a hospital supply place open on Saturday near my house and began the immobilization and healing process. As a result, I now only have 38 days in the boot versus staring at six weeks. The former seems like so much less time. The boot is fairly comfortable, but it makes my left leg a couple inches longer than my right. This has played funny games with my lower back and hips as I walk a bit contorted. 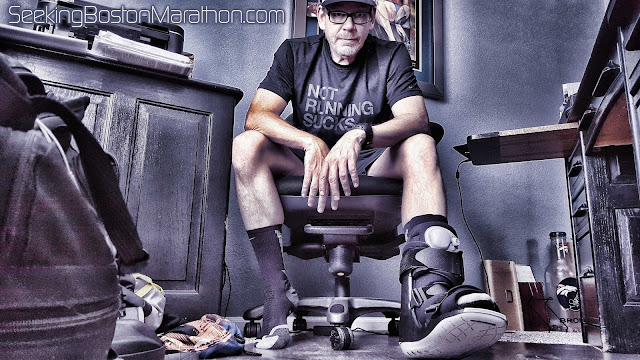 Anyway, enough of that sad, boring crap. With a long weekend in New York City, the encouraging and glass half full aspects of this weekend?

Packing was much easier as my run gear (and various weather options) remained at home. I did pack for the gym.

The advantage of packing in my situation is that I only need to pack 1/2 my shoes as I don't need any left ones. See...things are looking brighter already.

I've been in touch with a few of the blogger heavyweights and plan to join some meetups to cheer on my peeps and take in the revelry. Just no shake-out run this year.

Our hotel is world class! We're staying at the famous Essex House that sits right on Central Park. While half my life seems like it's in a hotel room at a Marriott Courtyard, I love an opulent hotel stay (as does wifie.)

The most important night of sleep before a marathon is two nights before (Friday) since you don't typically sleep on Saturday night mentally pouring over the race the following morning. Not a problem this year as I'll be partying with the New Yorkers...it does happen to be Halloween on Saturday night. While you're sleeping, I'll be getting my party on.

And lastly, you tell me! If you've been to New York City or you haven't, but always wanted to go, you can live vicariously though me. Where should I go, and what should we do? I will do it and blog, and selfie my way through the weekend. I've been to "ground zero" before with my wife and daughter, but that was before the museum opened. So, that's a candidate event. Let me know what you'd do if you had three days in the city, and let me know if you're in New York City for the race, you can sign my boot and get a SeekingBostonMarathon.com sticker.

And lastly, is it bad that I've layed in bed at night and wondered, if I could rent one of those one leg scooters and walk the marathon on my one good leg?