Okay, okay, the most overused term in Colorado is the title of this post which has more to do with our state's reputation as the "Amsterdam of the West." In this case, last weekend I competed in the Rocky Mountain Triathlon in Silverthorne, Colorado touted as the highest triathlon in the world at 8,730 feet.

This was only my second triathlon of the year in my abbreviated campaign as I've continued to rehabilitate the torn labrum in my right hip. I have traveled through Silverthorne several times over the years as it's on the way to Vail and many other ski areas. Silverthorne is in a mountain valley just beyond the Eisenhower tunnel along I-70 which had it's origins in mining and served as a camp for workers building the nearby Dillon Dam. The race transition area was in the North Pond off Highway 9. All in all, by far the most beautiful triathlon course I've ever competed in on all three legs. The run leg took off south along the Blue River Trail. 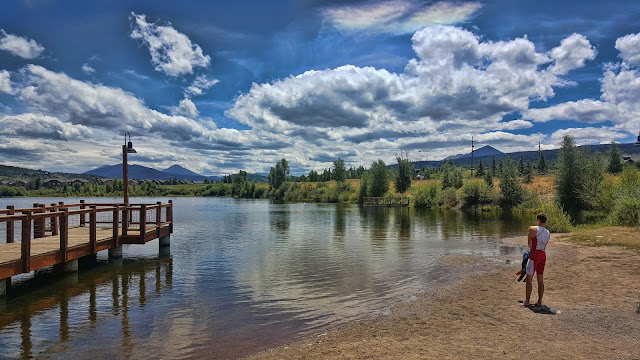 With heavy rain and flooding in the Denver area this summer, my normal open-water swim area has been shut down for much of the summer so I haven't had much open water practice. Dealing with elevation, and mountain cold water temperatures, my son (also racing) and I had a practice swim in our BlueSeventy wetsuits on Saturday with the race on Sunday. Considering there was still snow in ski areas in July, the water was quite a bit colder than what we'd been swimming in Denver this summer so it was a "good move" to get an idea of what we'd encounter on Sunday.

I had slightly higher expectations of myself compared to my first race since I'd only been running a few weeks on the bum hip prior to my first race. There were two distances; sprint and olympic and I opted (as I normally do) for the shorter and faster course. I have a need for speed! With a smaller body of water and perhaps the water temps, the swim was only 400 meter, bike was ten miles, and run was the typical 5k.

We stayed in Keystone nearby at the Keystone Lodge and Spa which I'd highly recommend. We had a fantastic dinner in the hotel the night before and I soaked in the hot tub before my usual "tossing and turning" night of sleep before a race. The room was spacious with an amazing view of the mountains and a crazy comfortable bed so I actually slept quite a bit better than normal. The morning routine was just that not before stopping for a quick cup of "joe" in town before racking our bikes in transition. 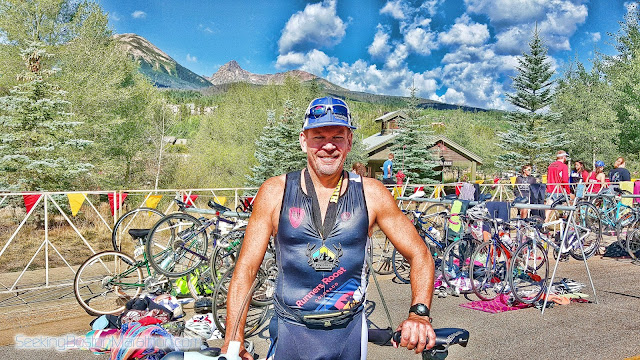 The mountain morning air was "crisp" for sure as even the volunteers were shuttering as they checked us in. Before the race started, I had another swim warm-up and was ready for the race. The only challenge with the pond was the water's edge went from gravel to large rocks in very shallow water so running in (or out) would be a challenge.

My swim leg was respectable, but I veered off a bit a couple times and my breathing was off in the first half. I raced in the safe confines of my local pool earlier in the week at the 400 meter distance which was around seven minutes. With my indirect line in the water and some of my normal abnormal open-water breathing, my swim was just under nine minutes. My transitions in this race were methodical with respectable times of 1:14 and 1:13. There's definitely room for improvement in my T1 getting out of the wetsuit, but my "flying squirrel" mount of the bike on my shoes already clipped in went quite well this time around.

The bike course was touted as flat which it generally was until the return leg of the out-and-back which seemed slightly uphill but the bigger issue was a headwind the whole way back. I was absolutely flying on the outbound at one point going 32 mph which is the fastest I've gone in a race on a flat course. Unfortunately, I lost time on the headwind return, but at least hit my goal of averaging over 20 mph on the bike leg. 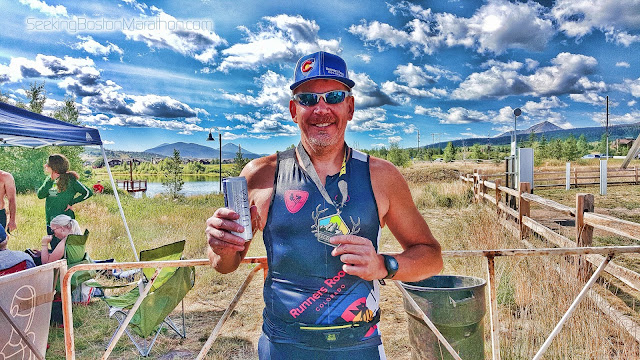 As I mentioned, the run course was beautiful as it ran along the Blue River Trail. I felt I'd absolutely "bombed" my first triathlon this summer on the run leg which is normally my strength. That was a few weeks earlier at the Rocky Mountain State Games which was 25 minutes (ugh...slow.) I was reasonably pleased as I hit my goal of improving on the run as my 5k leg was 22:33.

All the above was good enough for second in my age group with a podium prize of a bottle of wine--certainly beats another medal. Speaking of which, the finisher's medal might have been one of the coolest ones I've got. Serious bling with antlers!

The race was managed by Human Movement, Inc. I hadn't done any races with this group before, but found them to be extremely

friendly, organized, and put quality into the shirts (Under Armour branded) the and race medals. the only "downer" was while there was beer (it was warm,) there was no food before or after the race. I fuel myself prior, but was craving calories after the race. I would thought a local vendor could have made some "bank" by selling anything. Yelp would deliver as we devoured sandwiches from Jersey Boy's Pizza and Deli in town before the trek down the hill.

Overall, I'd say a solid improvement from my first triathlon. Next year? They are moving the race to Lake Dillon and adding a half Ironman. #tempting