[warning:  this blog contains adult content which may not be suitable for children, or my parents.]

I wrote a blog awhile back (Planes, Training, and Automobiles) that was about the challenges of training on the road. I am in sales in an industry that requires heavy travel.  Yes, I'm a "traveling salesman" but I don't sell shower rings and don't hold it against me.

My travel plans took me to Chicago last week and I plotted a flight that would get me in early enough to get an evening swim in and a planned early run the next morning.  I had no client or colleague dinner plans that night so everything was on track. I checked my iPhone for a nearby 24 Hour Fitness, but there were none to be found. Scheisse. Why there are no "24 hours" in Chicago must have some mafia-related reason or tied to the same reason that for years, the only coffee you could get in New Jersey was from Dunkin Donuts. I don't get the "big deal" with Dunkin Donuts coffee either. 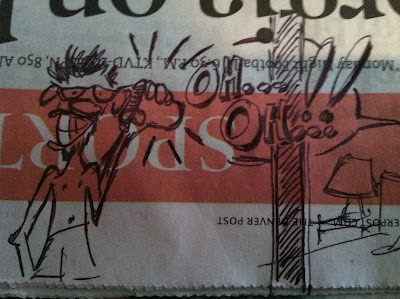 No 24 Hour Fitness meant getting the swim in at the hotel pool. Just like hotel beds and hotel gyms, the pools range from crappy to creepy to country club-like.  I had none of those options, but I did have a short pool that was around 30 feet in length. About half the length of the regulation pools I'm used to without the ropes and blue lines to guide my path.

The Marriott Residence Inn was serving up burgers and cocktails as it was getting dark adjacent to the poorly lit pool. I got the job done with 100 lengths of the shortened pool. The main issue I had was I continued to jam my fingers into the wall not being used to such a short and dark pool.

As the revelers got drunk poolside I was swimming like one as I was veering all over the place in the near dark water. After the swim, I did grab a burger but skipped the beer before heading off to bed. I had an early heart rate run before a breakfast meeting and a long day so it was "early to bed."

While deep asleep around one in the morning, I was awakened by an argument in the adjacent room. No doubt a liquor-infused quarrel.  This was a "four out of five star" event with plenty of "f bombs" flying. Half asleep, I had no logic nor energy to deal with it. Two hours flew by and to the best of my recollection, I dozed off. Not for long since they either had kept going or set their alarm to resume fighting at 5 AM.

I finally called the front desk to complain and they said they would call to check it out. I had a vent that "piped in" every noise from their room so I heard the woman answer the phone and apologize. They quickly resumed fighting and by this time, it was time to get up. I couldn't sleep so I might as well run. Five miles done on the treadmill accomplished. I felt groggy during the run and must admit, it was a chore with little to no sleep. Before the workout, I called the front desk again. More apologies from the night shift manager.

I spotted a couple in the lobby who had been drinking beer from a pitcher the night before.  He bore the resemblance of an alcoholic.  Reddish skin with a purple undertone and bulbous nose.  He looked angry. She looked pissed, submissive, and had 80's "big hair."  I learned later that Nascar was in town.  The pieces were finally coming together.  They were "them."

Upon returning to my room, the "war room" next door was quiet.  Further proof the culprits I spotted at breakfast were still  in the lobby soaking up the alcohol with griddle waffles.  I was exhausted.

I closed my eyes for five minutes on my bed and faint groans starting to come from next door. Yes.  They were back with food in their bellies, and "make-up sex" had begun.  Normally I may have had some voyeuristic interest.  In my 20's (or perhaps in my 40's) I may have cupped a glass to my ear on the wall for entertainment, but I was over these jugheads.  I went about getting ready for work but my bathroom was like an amplifier next to their bed.  It sounded like Lassie was giving birth.

I'm not sure what was louder; the fight or the make-up act.  Regardless, I got my workouts in and I guess they got theirs.  The night manager gave me 10,000 Marriott points.  Tanks for nuttin!  I would have preferred the sleep.

Next time someone talks about business travel and how glamorous it sounds , remember my Chicago Nascar night.
Email Post
Labels: marathon training travel and running