Back to Seeking Boston Marathon

I'm in a strange juxtaposition with all the stories still coming out of the wicked hot Boston Marathon.  I didn't run it and I'm in taper mode for my first Mary in over a year. I will be running the Colorado Marathon in two weeks and two days.  Yes...I'm in running purgatory. It's taper time.

I'm in awe of all the accounts of the courageous races put out by my running friends at Boston.  I can practically smell the new asphalt laid down on "heartbreak hill."  Sounds like you could actually fry an egg on that hill.  Runners younger and faster than me that hit the medic tent and had their first DNF.  One of them ran her first Boston.  Can you imagine finally getting there and not coming home with the medal?  No...you don't get one unless you finish. Painful in more ways than one, but even more respect.

I haven't heard of many PR's, but have heard about friends who helped "will" their fellow runners to complete including IRONMikeTRI who "sherpa'd" his friend through the entire race running at a pace much slower than he could have, but his partner may not have hit the turn onto Boylston street (the final 1/4 mile stretch of Boston) without him.  My friend DP Turtle "bonked" then barfed.  Neither are fun.

Luau shared beer and helped text as a spectator.
Will Run for Beer helped me understand that while I've run two mary's in similar heat, the difference was most people haven't trained the last four months in upper 80's heat unless you live on another continent.

I was scheduled to cross train on Patriot's Day with swimming in mind.  Screw that, I had to run so I moved Tuesday's speed work (eight Yasso 800's) to Monday.  Not my best day, but I ran with Boston in mind in more ways than one.  My goal at this stage of my run career (wouldn't that be great if that actually was my career?) is to qualify for Boston again.

I ran Boston last year for the second time. In two weeks and two days, my goal will be to notch another BQ.  I normally have 3-4 goals for a race.  The first which I learned from Hal Higdon's book is to merely complete the training plan--typically 500-600 miles over 16 weeks.  It's an accomplishment in and of itself, but there's no medal and no one cheering or congratulating you.  My other goals revolve around my finish times; what I'd be happy with and what my "stretch goal is."  Not quite ready to put those out there yet.

By the numbers, I will crest over 500 miles trained this weekend and I'm 95% through the plan as I literally plot it out in a spreadsheet.  As the weeks and miles pile up, I plot the actuals along with details (in cell notes) on how I felt, where I ran, heart rate, and pace.  This helps compare to similar plot points in previous training plans. 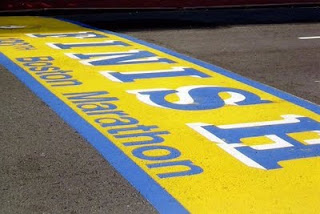 Unlike a lot of runners, I love the taper period--the 2-3 weeks at the end of training where you "taper" off the long runs and frequency of runs to rest the body for race day.  Having followed the Furman FIRST training plan literally "by the book" (Run Less, Run Faster,) it's still a fairly aggressive few weeks leading up to race day.

Last Saturday was a 20 miler at 15 seconds over marathon pace which I finished right where I should have at an average of a 7:50 mile pace.  The schedule this week had Yasso's and a mid tempo run at a 7:08 pace. Yes, that's Furman's idea of a taper.  I read the book, and plotted it in a chart, but I really didn't think about it until each week un-raveled.  While it only has three runs a week, they are all aggressive runs.

Timing could not have been better with Boston this week.  Not that I needed any more motivation, but NOT running it this year has filled me with determination to make a return engagement.  The next two weekends have ten and thirteen mile runs at marathon pace.  You call that a taper?  With 13 weeks into the plan, I'm not about to question it.  If week 14 instructed me to wrap bacon around my ankles and wear a purple thong, I would do it.

Back to my online friend, DP Turtle.  When I qualified and ran my first Boston Marathon, he asked me if I was going to change my blog name.  No.  You are (or at least I am) in a constant quest for the unicorn.  Seeking, Sought, and now back to Seeking Boston Marathon.  No pressure.
Email Post
Labels: #runchat #runnerds boston marathon colorado marathon furman first run less run faster