The Wall: Rated R for Running Language After Mile 20

As I took in Roger Water's recent Wall concert in Denver, I could not help draw the parallels of "hitting the wall" as a marathon runner. As far as the concert, it was well worth the $250 price tag for the reprise of the concert production first staged 30 years prior. The concert began with a half built wall across the entire length of the stage and as the show progressed, stage hands deftly added bricks (all in all, it's just another brick in the wall) as video projected onto the wall showing anti-war and oppression images.

As a marathon runner, I have dealt with hitting the wall in virtually all but one race. San Diego's Rock and Roll Marathon was my first in 2007. I'd entered the race with visions of qualifying for Boston in my first ever maratho 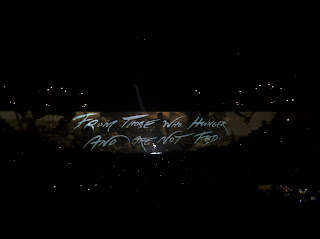 n (yeah...right...) having self trained myself only armed with internet research and having read Hal Higdon's Marathon Guide. All seemed well until I hit the 20ish mile when the wheels began to fall off. Having ignored a slight hitch in my giddyup, a sore hip prior to the race turned into an inflamed throbing pain that had me running with a notable slump on my whole left side. As proof, one of the photos I'd purchased showed the grimace, the slump, and some dude 20 years senior to me about ready to pass me. While San Diego is picturesque the last few miles (of the old course) prior to entering the Marine Corp base is a "Mad Max" barren wasteland with slight highway overpasses that felt like hills from back home in Colorado. Hmm...they didn't use this in the brochure. And to really piss you off, there was a downhill stretch that had the mirror uphill stretch on your left as you ran down the hill in the heat that emerged.

Thoughts and phrases that entered my mind in San Diego and other races since then upon smacking the wall include;

"How much did I pay for this?" 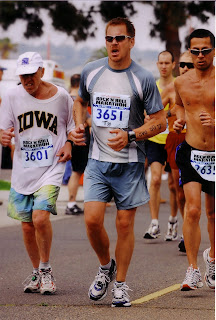 "How 'bout I walk my way to the finish."

"I think I'll take up cycling," and

"Go fuck yourself" (to the individuals who say, "you're almost there" when you know you're not.) I apologize in advance to my mom and those that view SeekingBostonMarathon as a family show but that's what the running demons in my head said, not me.

Other notable walls included my only mountain course; Steamboat Springs with the hill around mile 18 combined with a 4-5 mile stretch without a water station. Really?! Last years' Boston Marathon whose downhill start lulled me into a fast start and overconfidence then lead to deep knee bends in the later water stations. Then there was Portland where the wall hit me like a Mack Truck. Portland was the culmination of four marathons in ten months. Insanity. Even Meb and Ryan don't run four in ten months. What was I thinking? Obviously the marathon addiction had clouded my judgement and I paid for it as with it as the video showed a confident 13 mile mark which was contrasted by the old man shuffle I was doing at Mile 25.

After Portland, I had a pain in my heel that had me concerned enough to get x-rays on it; you know it's a tough wall when it leads to x-rays. Subconsciously, I was worried that I may even have a stress fracture again. I ran Chicago on a stress fracture (but didn't know it) which combined with record heat meant "one whale of a" wall and the pace group leaving me in the dust somewhere after 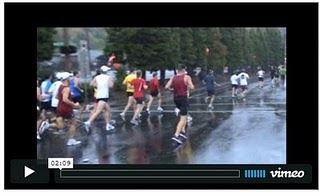 Skipping an MRI after Portland, I self prescribed five weeks of no running. That's like telling Dennis Rodman he can't go to Vegas or Charlie Sheen he can't trash a hotel room. Cold turkey...no running. Redirecting my energy, I have done eliptical, spin, and weight training to give the running part of my body a chance to heal while strengthening at the same time. Included in the weight training is plenty of quads (I call them Meb quads cuz that guy has some wicked pistons,) hammies, multi-hips, and abductors to have a strong set of wheels for the hills upcoming in Boston in April. The good news is that I feel rested, my heel feels great as does the sore plantar associated with it.

Just as Waters' Wall concert ended with the wall crashing down and thunderous applause , I will once again try and tear down the marathon wall starting with my Boston training plan in two weeks. "All in all, it's just another brick in the wall."
Email Post