This week’s training in preparation for the 114th running of the Boston Marathon brought the most diversity to my training I think I’ve seen—pretty much A to Z. With weather ranging from 15 degrees to 55 degrees and 950 miles apart (Denver to San Francisco.)

Sunday was Valentine’s Day and just what my wife and Valentine wanted to do was to go out in 15 degree weather early on Sunday morning for a run. The weather forecast called for low temps (15 degrees) and snow. I’ve been wanting to get some hills in during a light snow and test drive my new Yak Traks—essentially tire chains for running shoes. 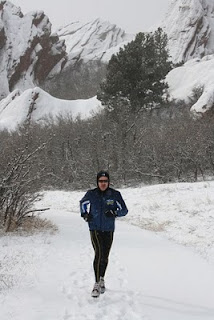 I targeted the known for their picturesque rock formations and trails. Our dog “Munch” had to stay behind as there are no pets allowed as they are like Chipotle stuffed burritos for the mountain lions. On the subject of mountain lions—not the smartest thing I’ve done is running in an area known for these large cats. Note to self…invite a slower friend next time. I find out after the fact that in the newly remodeled visitor’s center, that had several lion sightings in the area with comments like…”dragging their kill.” NIIICCE!

Not knowing I was in danger, it was one the most memorable runs I’ve had in a long time. The light snow was still falling and the Yak Traks did not fail as the footing was not an issue at all. Having a bit of elevation and running through the snow…a bit like running in sand meant a bit more exertion than normal, but no complaints here (click on snow picture for the video.)

The work schedule called for a trip to the Bay Area on Tuesday so I checked the weather report and packed all the gear double-checking to make sure I had the Garmin and running shoes. With only one rest day a week, training does not take a vacation when I travel. 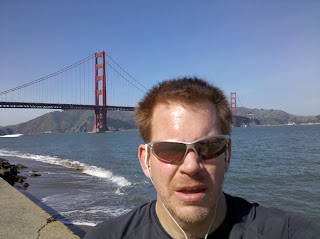 ady checked off was a run over the Golden Gate bridge in San Francisco—I’d actually run from the city over the bridge through Sausalito and into Tiburon. I’d finished that run with lunch in Tiburon (plenty of great options there) and took the Ferry back into the city.

This was a work week and the schedule called for 4-5 miles so I “squeezed” in a shorter run over the bridge into my lunch hour. It's difficult to compare, but I knocked out another breathtaking run in one week with an un-seasonably warm weather run over the bridge. After I posted on my DailyMile, Facebook, and Twitter, folks wondered…who shot the video?...Ironically a runner in town from San Paulo running in a 10 mile race that weekend. Another killer run for the week (click the Bay Bridge picture.)

Since I misread my training schedule, my Tuesday (before I left Denver) track training turned into a 3/3/1 tempo run (three mile warm-up, three mile 10K pace, and one mile cool-down.) Since my travels sent me south in the Bay Area on Thursday, I figured I’d “flip-flop” tempo for track. I figured why not pick a nice track?..so I sought out Stanford’s Cobb Track and Angell Field in .

I walked in as the college athletes were warming up for their afternoon practice while the nearby coaches looked on. I preceded to stretch out in the stands and started to feel “I’m not worthy” as the premier and wicked fast track and

field stars were stretching far beyond what this aged runner could mimic. I slid onto the track like I belonged there and was promptly “busted” by the track and field director and two-time Olympian, Edreck Floreal. I turned it into “small talk” with Edreck asking how this year’s team was doing and got the “not as good as I’d like” response. I slithered off the track with my tail between my legs, but not before I got my video (click on track pic.)

Feeling dejected and inspired, I went about cranking out my six by 800’s on the Stanford Campus finishing outside the fence of Cobb Field.

So I pulled the “hat trick” with three memorable runs in one week. Tonight is dinner in , tomorrow I fly home, hydrate and rest and finish the week with my longest training run of this training session with 22 miles with Runner’s Edge of the on Saturday morning.