Ten Things that Worked in My Last Marathon

1) Best training session I’ve had. For experienced runners or guys like me that are still learning, the race is won in the 16-18 weeks of training…not so much on race day. I stepped it up with the training on this one pushing myself further than I have before with more hills, tempo runs, track work and more long runs.
2) Pushing myself on the pace. This will go against everything I’ve read. As my training progressed, I moved from a comfortable eight minute mile to a 7:40ish range on long runs. The day before my marathon I decided to move up to the 3:20 pace group—my previous marathon I ran with the 3:30 group.
3) Related to the above, I am also a big believer in the pace group. Akin to the camaraderie of your training group, you really become a “band of brothers” with people you literally meet race day who all have a goal of meeting the time carried by the pace group leader.
4) Picking the right race. My goal was t 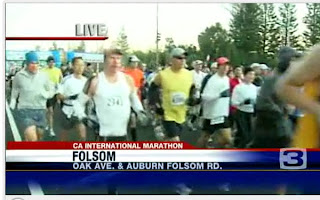 o qualify for the Boston Marathon, and no coincidence I picked Sacramento’s California International Marathon (CIM.) CIM has an overall elevation decrease, cool temperatures, and normally good weather (it was cold, but the weather didn’t exactly cooperate.) Despite an undertone of downtrodden economy, I really enjoyed Sacramento as a city the days up to the race. Great people, great restaurants, good time. I would recommend it to anyone looking for a destination city qualifier.
5) Skins compression tights. I will have a hard time not wearing my kryptonite tights in my next ½ or full marathon. Skins tout that you can legally break records—almost like Michael Phelps and the LZR tights that are so controversial. They really seem to help with all the aches and pains you encounter with a fast pace on a full 26.2 miles. I’ve set two PR’s in the last two races, so I guess I’m a believer.
6) Runner’s fanny pack. I admit it, I owned a walking fanny pack for years and still have a couple tucked in my sock drawer. My wife informed me that it’s the equivalent of white tube socks pulled up and shorts. I no longer don the fanny pack on vacations, but sported a runner’s belt on race day. I have fumbled with grabbing gel packs out of tiny pockets in various shorts—I even lost my beer money in my first marathon in San Diego on a hill climb as I was pulling out a goo pack. This functioned just like a fanny pack should. Everything you need within easy access up front.
7) In and out of the porto-potty like a Nascar pitstop. This should be one of those thi 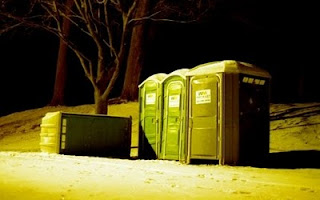 ngs that didn’t work as my previous three marathons didn’t require an in-race potty stop. My timing was a bit off as I’d clearly hydrated enough before the race and in the first 8 miles, but I realized that I wasn’t going to “sweat it out” and needed to peel off the herd to hit a mint green phone booth along the way. Record time to speed off, do my thing and catch back up to the group. I’ve read that you need to take advantage of the empty stalls when you can.
8) Diet. This is the hardest one for me as I am a freak about following the training schedule, but sometimes don’t eat as I should. I made a conscious effort the last 6-8 weeks to pay attention to what was going into my body. Even the novice runner knows about “carb loading” particularly the night before a race. I found myself loading on oatmeal and yogurt in my training as I approached the marathon and even curtailed (almost cut out) alcohol. The result was a lean and mean running machine with the lightest race day weight I’ve run with.
9) KT Tape worn by Kerri Walsh in the last Summer Olympics (Volleyball.) Kind of like duct tape for athletes—it fixes a lot of things. I used it to tape my lower left leg to tend to so 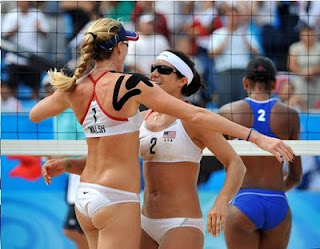 me muscle strain related to the stress fracture. I also had a tight/sore shoulder that I didn’t want to hinder my upper body. They have great videos on their website on how to apply. Kerri looks better than I do with the tape.
10) Mind games. After mile 20, it almost becomes mind over matter. Your body is starting to rebel and telling your head, “why are you doing this?” As I’ve mentioned before, dolling out “Scooby snacks” certainly help. My formula for this starting with an Extreme six hour energy shot (who would have thought that a common item in a gas station would help a marathon runner?) Every four miles, I popped a Shot Blok and held off until after the 20 mile mark to indulge in a Banana Strawberry Power Gel. At mile 22, I merely had to think about running four miles…mile 24…just a two miler. Better to look out the windshield vs. the rear view mirror.
Email Post
Labels: boston marathon qualifier California International Marathon CIM qualifying for boston marathon